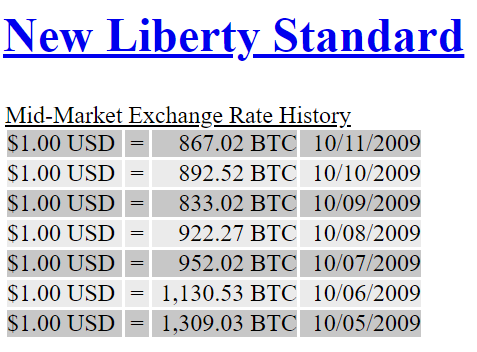 With the rapid growth of Bitcoin and the proliferation of cryptocurrency exchanges, it’s easy to forget that a mere 12 years ago, there were no trading markets for Bitcoin and no market established Bitcoin prices.

In fact, following the mining of the first Bitcoin block on 3 January 2009 by the eponymous Bitcoin creator Satoshi Nakamoto, it would be another 9 months until the first known Bitcoin price was recorded on 5 October 2009.

Some common themes among the early Bitcoin exchanges were that they were operated more or less as one man outfits, they quoted extremely low Bitcoin prices, the exchanges had limited interest even among the Bitcoin hobbyists, and the exchanges were prone to attacks from hackers and fraudulent activity.

The first known Bitcoin price, or exchange rate, recorded on 5 October 2009 was published on what was the world’s first Bitcoin exchange site, New Liberty Standard (NLS), a site which offered a service to buy and sell Bitcoins in exchange for US dollars using PayPal. The site was operated by “NewLibertyStandard”, who was a frequent contributor to the early Bitcoin forum Bitcointalk.org, and who discussed his exchange site on the forum in posts such as here.

NewLibertyStandard calculated this exchange rate using a formula based on:

“dividing $1.00 by the average amount of electricity required to run a computer with high CPU for a year, 1331.5 kWh, multiplied by the average residential cost of electricity in the United States for the previous year, $0.1136, divided by 12 months divided, by the number of bitcoins generated by my computer over the past 30 days.”

As you can see, this Bitcoin price in the early days was determined not by buying and selling activity of Bitcoins, but by the price of electricity and the site owner’s personal Bitcoin mining output. The calculation became a bit more complicated in early 2010 using rolling averages and the addition of broadband internet costs, and can be seen in another archive imprint from the New Liberty Standard site in late April 2010 here.

Interestingly, it was NewLibertyStandard who came up with the Bitcoin symbol ฿ and the Bitcoin ticker BTC, when on 5 February 2010 he posted on the Bitcointalk.org forum that:

In early October 2009, there was also an historic Bitcoin / USD transaction which consisted of a Finnish programmer and early Bitcoin supporter named Martti Malmi selling 5050 BTC to NewLibertyStandard for US$ 5.02, which was the equivalent of 9.94 US cents per 100 Bitcoins.