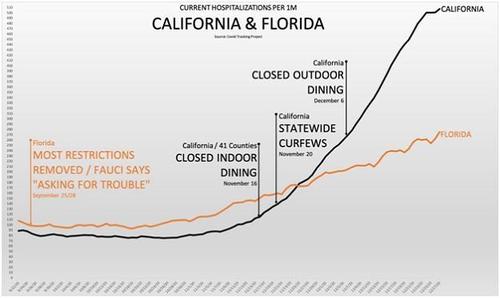 Back in the summer of 2020, a critical discussion almost broke out between progressives on one hand, who were adamant that if “just one life” could be saved with pervasive, widespread economic lockdowns that it was everyone’s imperative to bring the economy to a crawl, and pragmatic, rational thinkers who argued that the economic cost of such lockdowns would end up being far greater than the immediate human cost in terms of lives lost, especially since the impacted lives would be far younger than potential covid vicitms most of whom are in their 70s and 80s. Deutsche Bank credit strategist Jim Reid summarized it best as follows:

… while the coronavirus has lead to virtually no excess deaths in younger age cohorts, it is the younger strata of society that are the most impact by the economic shutdowns that have resulted in tens of millions of unemployed Millennials.

Reid then argued that since “younger people will be suffering most from the economic impact of Covid-19 for many years to come, we wonder how history will judge the global response.” To this, however, we countered that since the economic crisis resulting from Covid-19 helped crush Donald Trump’s chances for re-election and also unleashed full-blown helicopter money as well as the biggest round of corporate bailouts of insolvent and zombie companies in history, “we are confident that the tsunami of global moral hazard – which will leave tens of millions of young workers without a job – will allow central bankers to sleep soundly at night.”

Unfortunately as we said at the top, this discussion “almost” happened, although in the end it did not because any time an attempt for rational discourse emerged it would be promptly and violently shouted down by the armies of virtue signalers who were also monetarily incentivized in maintaining the lockdown status quo (such as bankers, pharma and online payment companies, politicians, the media and so on) and who would instantly defer to the “scientists” as the only expert class worth opining on the critical debate of “excess covid deaths now” vs “excess deaths from economic shutdowns later.”

Well, with a roughly one year delay, scientists from Duke, Harvard, and Johns Hopkins finally wrote a paper which may come as a shock to all the virtue-signaling progs out there, because its conclusion is stunning: in a nutshell, the NBER working paper (“The Long-Term Impact Of The Covid-19 Unemployment Shock On life Expectancy And Mortality Rates“) finds that while there have been roughly 400,000 covid-linked deaths so far (amid extensive debate of just what is a “covid-linked death” since even crash victims are counted as covid casualties, not to mention tens of thousands of others with terminal co-morbidities), the long-term economic implications from covid-related lockdowns are dire, resulting in COVID-19-related unemployment  “which is between 2 and 5 times larger than the typical unemployment shock” and resulting in a “3.0% increase in mortality rate and a 0.5%  drop in life expectancy over the next 15 years for the overall American population.”

The bottom line, as scientists Bianchi, Bianchi and Song find is that…

For the overall population, the increase in the death rate following the COVID-19 pandemic implies a staggering 0.89 and 1.37 million excess deaths over the next 15 and 20 years, respectively

That’s bad; where it gets even worse for the world’s progressives is the report’s finding that the “shock will disproportionately affect” women, particularly of Hispanic heritage; African Americans; foreign born individuals; less educated adults and individuals age 16-24 – in short all those racial and social classes that are of primary concern to the “progressives” – while “white men might suffer large consequences over longer horizons” (we doubt progs will care too much about this).

In short, everyone will be hit by the covid-lockdowns, with blacks, Hispanics and women first, and white men next for a far longer period of time. And, in the process, nearly 1 million excess deaths will take place that wouldn’t have taken place otherwise.

We wonder how those same progressives, who demanded wholesale economic lockdowns – because that’s the only way to save even one life – will feel now that scientists explicitly state that their preferred policies will lead to nearly a million excess deaths simply from the economic shutdowns. Or, as Reid warned all the way back in July 2020 – when nobody bothered to listen – “younger people will be suffering most from the economic impact of Covid-19 for many years to come, we wonder how history will judge the global response.”

Here are some more details from the NBER paper:

While the trade-off between containing  the  COVID-19  pandemic and economic activity has been analyzed in the short-term,  there is currently no analysis regarding the long-term impact of the COVID-19-related economic recession on public health. What is more, most of  the papers interested in the relation between the COVID-19 pandemic and economic activity argue, correctly, that lockdowns can save lives at the cost of reducing economic activity, but they do not consider the possibility that severe economic distress might also have important consequences  on  human  well-being  (Gordon  and  Sommers  (2016)  and  Ruhm (2015)). This shortcoming is arguably explained by the fact that current macroeconomic models do not allow for the  possibility that economic activity might affect mortality rates of the agents in the economy.

Which merely goes to show just how idiotic macroeconomics as a so-called “science” truly is, because if economists are truly baffled by this “shortcoming”, maybe they should take a look at the millions of small businesses and unemployed service workers to emerge from the covid crisis. Anyway, continuing with the paper:

Between  late  March-early April, most U.S. states imposed stay-at-home orders and lockdowns, resulting in widespread shut down of business. Unemployment rate rose from 3.8% in February 2020 to 14.7% in April 2020 with 23.1 million unemployed Americans.  Despite a decline to 6.7% in November 2020,the average unemployment rate over the year is comparable with the 10% unemployment rate at  the peak of the 2007-2009 Great Recession and it is near the post-World War II historical maximum reached in the early 1980s (10.8%). Importantly, COVID-19 related job losses disproportionately affect women, particularly of Hispanic heritage; African Americans; foreign born individuals; less educated adults and individuals age 16-24.  In fact, the unemployment rate underestimates the extent of the economic contraction as many potential workers have abandoned the workforce (especially women).

We fast-forward to the conclusion:

The long-term effects of the COVID-19 related unemployment surge on the US mortality rate have not been characterized in the literature. Thus, as a last step, we compute an estimate of  the excess deaths associated with the COVID-19 unemployment shock.   This corresponds to the difference between the number of deaths predicted by the model with and without the unemployment shock observed in 2020. For the overall population, the increase in the death rate following the COVID-19 pandemic implies a staggering 0.89 and 1.37 million excess deaths over the next 15 and 20 years, respectively.

Overall, our results indicate that, based on the historical evidence, the COVID-19 pandemic might have long-lasting consequences on human health through its impact on economic activity. We interpret these results as a strong indication that policymakers should take into consideration the severe, long-run implications of such a large economic recession on people’s lives when deliberating on COVID-19 recovery and containment measures. Without any doubt, lockdowns save lives, but they also contribute to the decline in real activity that can have severe consequences on health. Policy-makers should therefore consider combining lockdowns with policy interventions meant to reduce economic distress, guarantee access to health care, and facilitate effective economic reopening under health care policies to limit SARS-CoV-19 spread.

Needless to say, the longer the lockdowns continue, the death toll will only grow bigger across all races and social classes.

But wait, there’s even more!

As we reported last week, a new peer reviewed study out of Stanford has questioned the effectiveness of lockdowns and stay-at-home orders (which it calls NPIs, or non-pharmaceutical interventions) to combat Covid-19. The study’s lead author (an associate professor in the Department of Medicine at Stanford), found that “the study did not find evidence to support that NPIs were effective in preventing the spread” and that “we fail to find strong evidence supporting a role for more restrictive NPIs in the control of COVID in early 2020.”

So, did left-leaning states’ rushed policies in response to the pandemic – to unleash broad lockdowns, crush economies, and spark mass unemployment and poverty leading to increasing deaths of despair actually achieve anything? The short answer is no…

… while the longer answer we now know thanks to the NBER report, is yes: they made the situation for African Americans, Hispanics and women (and yes, even white men) considerably worse for at least the next two decades.

In other words, while lockdowns may not have even led to a tangible improvement in halting the spread of covid, what they will certainly do is lead to hundreds of thousands, perhaps millions, in excess deaths over the next decade.

Which begs the question: now that “respected scientists” have finally quantified the “staggering” excess death toll resulting from covid lockdowns, is it time to finally have the discussion – which nobody has dared to have since about a year ago – about the cost-benefit analysis between widespread economic lockdowns, which will lead over a million early deaths, and locking down the economy every time there is even a modest rebound in covid cases…