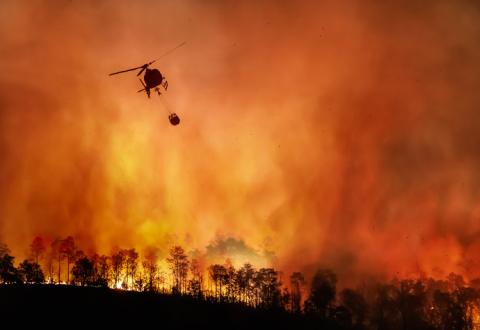 My colleague from the philosophy department was becoming increasingly angry. He was trying to be polite, but it was clear that he was raging inside. After a few minutes, he smiled a very strained smile and excused himself.

Our conversation was about California, or to be more specific, California governance. As readers can imagine, he was bullish on how the Democratic Party governs the state, California being perhaps the most one-party state in the USA. Every statewide election has gone to a Democrat in the last decade, and Democrats have a supermajority in the state legislature, which means that there is no meaningful Republican opposition and whatever the Democrats want, they get.

Not surprisingly, California governance is squarely progressive. The unions representing government employees effectively run the legislature, and as a result, pay, benefits, and pensions for those workers increasingly are straining the state budgets. (Steven Greenhut, a libertarian journalist based in California, has documented the unsustainable growth of government in that state for nearly two decades.) Yet, the state continues to march politically and economically in the progressive direction as though the laws of economics didn’t matter.

For the most part I have observed progressive California from far away, but my life took a different turn a few years ago, and the state is becoming my new home. I married a retired nurse from Sacramento in 2018, and because of health issues with her adult daughter, she has to remain in that city, something not in our original plans. Because my school’s campus either has been closed or severely restricted during the covid-19 lockdowns, I have spent most of the past year working from my wife’s home.

Living and working in California has offered me the opportunity to observe California progressivism up close, and it has been an interesting experience. Yes, the state where I officially reside, Maryland, is famously one-party and progressive, but the progressivism of California makes Maryland’s legislature look almost red state by comparison and surreal in some ways.

For example, the California legislature in its progressive wisdom effectively decriminalized theft as long as thieves take less than $950 worth of merchandise, officially reducing such theft to a misdemeanor but in effect making it legal, since progressive California prosecutors don’t like to be bothered by petty criminals. In practice, that means consumer goods are much harder to find in California stores than one might experience elsewhere. For me, the difference was quite revealing, as I recently returned to Maryland after spending close to nine months in Sacramento.

When I go to the Walmart near my wife’s home, I find many things openly are on display in Maryland are behind locked cases in California. Furthermore, California’s draconian labor laws mean Walmart has fewer employees, so if I wish to purchase something I easily could buy in Maryland, I have to wait for a long time and often I just walk away because no one is available to open the glass case. Yet, even with these provisions, shoplifting losses for California retailers are enormous, and the state’s pro-theft laws have encouraged organized grab-and-run rings.

My progressive colleagues, like my philosophy professor friend, see no problem with such developments. To them, the real thieves are the capitalists, the retailers like Walmart which refuse to pay “living wages” to their employees, and, according to Senator Bernie Sanders, the capitalists have “been looting” Americans for years. Thus, the wave of theft in that state is a positive development, according to progressives.

I can go on, but it isn’t difficult to expose the vast array of sins (economic and otherwise) committed by the California political classes, and I liken this kind of punditry to swinging a bat in a room full of pinatas—one simply cannot miss. Steven Greenhut has been exposing California’s follies for years. However, perhaps the best recent commentary I have read on the progressive mentality that governs the state comes from blogger Mike Solana, who deftly skewers progressive politicians from the Golden State who now accuse the tech industry of having “extracted wealth” from California before leaving for the greener pastures of lower-tax havens such as Texas and Florida.

Solana’s rip is worth the read if for no other reason than that he exposes the cluelessness of progressive politicians and pundits, and one can be assured that progressive politicians will fit Tallyrand’s description of the Bourbons: “They had learned nothing, and had forgotten nothing.” Yet, Solana also is puzzled as to why Bay Area politicians who fail spectacularly also win landslide elections:

Nothing in San Francisco can be set on a path to slow correction until at least six of the eleven district board seats along with the mayorship belong to sane, goal-oriented leaders cognizant of our city’s many problems, and single-mindedly focused on solving them. These politicians will likewise need to be extremely well-funded. This is to say we need a political class, funded by a political machine, neither of which currently exist. Even were both the class and the funding apparatus to rapidly emerge, and even were the new political coalition to win an undefeated string of miracle elections, it would take four years to seize meaningful political power from the resident psychotics in charge, who, as per the last election, appear to be very popular among close to ninety percent of voters (a curiosity for another wire). This is to say nothing of the broader Bay Area political toxicity, nor the state political dynamics, which are poised to exacerbate every one of our problems. It is a multi-front political catastrophe.

During the covid-19 pandemic, which California politicians—and especially Governor Gavin Newsom—mismanaged spectacularly, California voters overwhelmingly chose the progressive status quo. While writers go on and on about the mind-boggling politics of California, the voters continue to send the left-wing progressives into office at all levels of government. While some might believe that “education” is the key to the so-called self-governance of democracy, voters in California clearly are choosing their candidates for reasons other than demonstrating wisdom in office. Indeed, why voters insist on putting the worst on top is perhaps the most intriguing question one asks about California politics.

Typical wisdom says that voters “vote for their pocketbooks,” but the progressives whom the lower-income voters overwhelmingly choose to elect are responsible for California having the nation’s highest poverty rates. Furthermore, for all the antiwealth rhetoric that California’s progressive candidates spew out, the very poor and the very rich voters in California tend to choose and support the same candidates, and the Democratic Party is the party of choice of the state’s large number of billionaires.

There is little or nothing that the current progressive state government has done that promotes the promotion of real wealth in California, yet even as state authorities actively destroy economic opportunities, the voters respond by demanding more of the same. That would seem to be a mystery, but maybe not. Let me explain.

In the past few years, wildfires have ravaged huge tracts of mostly public land in California (and in much of the West, although California has been hit the hardest). There are many reasons for the fires, the most obvious being that most of California receives little rainfall and many fires occur in mountainous terrain, where it is difficult to fight them. But there is much more, and most of it has to do with progressive policies. Even the George Soros–funded Pro Publica recognizes the role of fire suppression-based land management practices in making the fires worse: