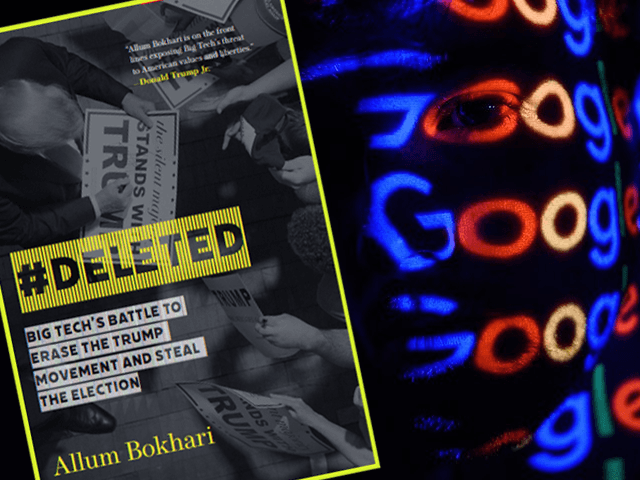 Breitbart News senior technology correspondent Allum Bokhari appeared on the Mark Levin Show on the Westwood One podcast network to discuss his book, DELETED: Big Tech’s Battle to Erase the Trump Movement and Steal the Election.

Bokhari and Levin discussed how the book anticipated Big Tech’s interference in the election and censoring of the President, and what the combination of Silicon Valley’s power with the Democrat party means for the future of the country.

The full episode can be listened to at Radio.com and Audible.

DELETED: Big Tech’s Battle to Erase the Trump Movement and Steal the Election can be purchased at deletedbook.com

BOKHARI: This book, I published it in September 2020, a month or so before the election, and unfortunately this whole tech censorship thing has been like watching an avalanche in slow motion. You can see what’s going to happen but you can’t stop it.

LEVIN: And yet you kinda knew it was coming, how did you know?

BOKHARI: I’ve been covering this topic for about five years, since 2015, as a tech reporter for Breitbart News. I think what we saw back then before tech censorship was a really big issue, was that the internet was the greatest platform for free speech that ever existed, but we also had a new generation of far-left activists emerging that were more hostile to free speech than ever before, so it was inevitable that those two trends would come into conflict. And that was really just supercharged after Trump won the election in 2016. And the book isn’t just my opinion, it also includes interviews with whistleblowers inside Silicon Valley companies, inside Google, inside Twitter and Facebook, all of whom said that, as soon as Trump won, there was complete panic inside Silicon Valley…”

LEVIN: And by the way, panic in Silicon Valley with big tech, panic in big media, in Manhattan and Washington, all kinds of panic. So the Democrats in these operations, whether it’s Chuck Todd or George Stephanopoulos, Jake Tapper, all the rest — they went into full attack mode from the moment this man was elected.

BOKHARI: That’s absolutely correct, and one of the points I try to get across in the book is how all of these forces work together. Not just big tech, but the media and the politicians on the Democratic side pressuring big tech to censor president Trump, as well as extremely well-funded NGOs, the deep state, all of these forces recognized the danger of allowing a free and open internet, of allowing alternative conservative media to compete on an equal playing field with the mainstream media.

LEVIN: It’s not really violence, is it. They’re painting with an awfully broad brush, people who’ve never been violent in their lives. Politicians they disagree with, they claim they’re inciting violence and so forth. They have no proof, no evidence, in many cases no connection whatsoever. This is just a crackdown on competition and a crackdown on speech by a tyrannical left, isn’t it?

BOKHARI: That’s right, and CNN is actually taking this to new heights. It’s not enough that they censored President Trump, the first world leader to be banned on all of these platforms. Now they’re pressuring the cable companies to de-platform Newsmax and OAN, they’re pressuring the app stores, they pressured the app stores to get rid of Parler, which is an alternative free speech oriented social network. You had the anti-defamation league writing letters to the Justice Department calling for a criminal investigation against Gab.com, another free speech oriented social network. All of these competitors have zero tolerance for violence, much like Twitter and Facebook say they do, but they get de-platformed to a much greater extent. The thing one has to understand here is that there’s no universal standards. There’s plenty of incitement to violence, criminal behavior, on Twitter and on Facebook, but they aren’t treated the same way as the alternative platforms, because they’re part of the club, they’re with the agenda, they’re part of the anti-Trump agenda, they did everything they could to stop him winning re-election, and they’re going to be let off the hook.

LEVIN: So we have a situation here where the news media not only helped expose this and report on this, they’re part of it. The praetorian guard media, I’ve been calling them for years. You now have big tech. You have the Democrat party in bed with both. It’s very difficult to confront this, isn’t it?

BOKHARI: Yes, and this is going to be a really terrifying trend we’ll see in the next two years. With the Democrats now in charge of the Senate, in charge of the House, in charge of the White House, we’re going to see the unchecked corporate power of Big Tech, which was frightening enough under Trump, merging with the power of the federal government. Joe Biden is already appointing Silicon Valley executives to his transition team. He’s going to use the power of the state to press for even more censorship, and he’s already in the process of smearing wide swaths of the American public as domestic extremists or domestic terrorists, so it’s very clear what direction he’s going to go.

Breitbart News will continue to report on the Big Tech Masters of the Universe.