Everyone is busy and very nervously trying to decipher the true agenda of the Biden administration. Much of his agenda is still shrouded in mystery, however, we can clearly state that most important issue of Biden’s first day was the announcement of John Kerry being in charge of climate change.

There is a lot going that dwarfs the COVID lockdowns. John Kerry, a frequent visitor to the secretive lair of the New World Order at the South Pole and John Kerry should be back in the news again, but is not. Why! Kerry, although designated to be the Czar (commie term) of climate change, is being all but ignored in the mainstream media. Of all the first day proclamations by Biden, this is his most important appointment for reasons that will be all too clear!

I recently had a discussion with my friend and former NSA operative, Vance Davis. We had a conversation about where the country is headed in the next 6-8 weeks. I was surprised at some of the things coming our way. The challenges can be mind-numbing. The conversation drifted around to the question as to why John Kerry was at the South Pole on election day of 2016. On its face, the behavior seems bizarre. However, the reasons are very nefarious. Prior to the completion of this article, the demonic connections between the Biden administration, John Kerry’s specific role and the relationship to the Covid vaccine will become more apparent, although this is a developing story.

This article is going to capture this existential threat that almost nobody is dealing with. As ludicrous as this sounds, every resident on the planet is under threat from rogue, but intelligently controlled asteroids. I interviewed Steve Quayle last summer and we touched upon this subject of weaponized asteroids. We have different source, but effectively, both Steve and myself have become aware that intelligently controlled asteroids have come into our solar system and are embedded in the asteroid belt and are awaiting deployment to the Earth. Is this New World Order leverage? Additionally, the nature of the vaccine and what it is doing to human beings is a further contributor to the John Kerry agenda.  Is there an association with the occult and its grandmaster? The answer to all of these questions is an unqualified yes, and yes again!

in August of 2020, there were asteroids that had been reported already been dispatched earth’s way, 5 asteroids to be exact. They are not large asteroids, however, they could ruin a lot of peoples day if they landed in your area. The largest deployed asteroid is under 85 feet. So we have the seemingly unrelated variables of Satan, the South Pole and weaponized space objects. The latter even lends itself to the topic of Project Blue Beam which is a contrived and fake alien invasion of the earth designed to get nations to sacrifice their sovereignty and seek collective protection from a world government. The timing of such an event may not be totally clear on its relationship to Satan, but there is clearly a relationship. These variables will be linked in the conclusion.

As we build the case for what is coming, we must start with Steve Quayle’s work, Empire Beneath the Ice. 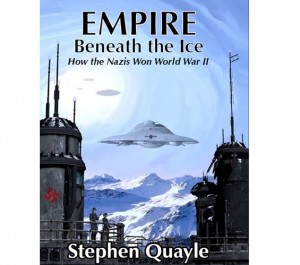 Previously, I interviewed Steve Quayle regarding his book Empire Beneath the Ice.  The book is popular, but I think undervalued for the revelations it brings to this topic. In his book, Steve establishes that Antarctica is the command and control of the New World Order and humans are not in charge.   His work bridges the gap between what my father did, when he was working on reverse engineering theoretical physics obtained from captured German scientists and the transhumanist agenda of the Biden administration.

Did you ever wonder why such notables, as John Kerry, have been summoned to the South Pole at the end of Obama’s Presidency? This is all part of Steve’s revelations. Steve’s book ties together much of this phenomenon and condenses it into an understandable format and this book is required reading.

Among many things, this book establishes that there is much more to our space program than NASA. NASA is an impotent figure head. The real action in space is contained within the 2 former secret space programs, which were working in opposition to each other.

There are 2 space programs, plus the figurehead, NASA. One of the non-NASA programs is still secret, although Trump brought the other one out into the public and legitimized it so it could receive public funding in order to oppose the other one. The second secret space program is controlled by the CIA/MOSSAD and several key globalists. It is totally rogue..

The second secret space program is wreaking havoc in our Solar System with very advanced technology including the control of asteroids.  Yes, this technology exists. This is our most serious present threat it’s even more threatening than what the democrats are trying to do to this country.  I interviewed Steve Quayle last summer on thecommonsenseshow.tv. We spent about 5 minutes on this subject and our information matches perfectly.

Predictive programming on the former TV show stargate SG1 is in clear evidence. The show has portrayed these groups but did not make it a prominent theme.  That particular show is very factual about the technologies that exist which are totally unknown to almost everyone on this planet. And when they hear about it, they don’t believe it anyway.

Now it is time to connect this seemingly disparate events into a comprehensive body of understanding.

There is a definitive Covid vaccine connection. As I have learned, and will explore in more depth in a later article, the vaccine is definitely designed to change your DNA/RNA. It will make humans more impervious to extreme temperatures. It will reduce metabolic needs. In other words, if one had the transhumanist agenda to terraform the planet, for nefarious purposes, such as a war against the forces of the Lord, then one would need genetically modified humans to be more adaptable so they could continue to play the role of useful idiots. As a teaser, I will say that mankind is being recruited and groomed for future military actions and it will not be on behalf of any country located on the earth. I have one strong admonition, if one takes the vaccine, they are renouncing their salvation.