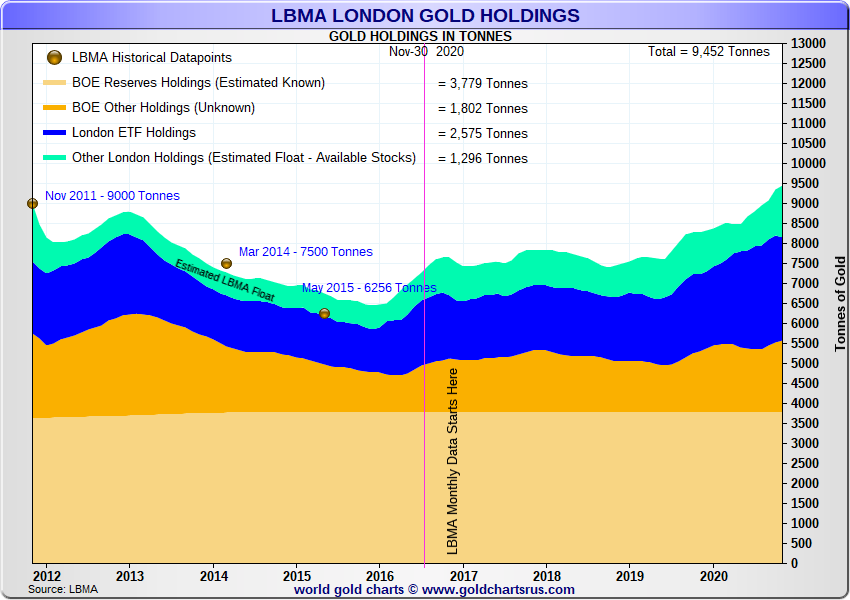 Last week, the London Bullion Market Association (LBMA) published its latest monthly update on gold holdings in the LBMA vaults in London, claiming that there are now record gold stocks of 9452 tonnes of gold held in these vaults.

Separately, the Bank of England, which also reports its gold vault data on a one month lagged basis, last week reported that the gold holdings in its vaults as of the 30 November 2020 totalled 179.423 million ozs of gold, or 5580.8 tonnes. While most of the gold held in the Bank of England vaults is held in custody of behalf of central banks, commercial (bullion) banks also have gold accounts at the Bank of England.

With the Bank of England holding 5580.8 tonnes of the 9452 tonnes LBMA total, this would mean that there were a combined 3871.2 tonnes of gold held across the ‘LBMA vaults” i.e. the London vaults of the three banks and the four security firms. A majority of this gold is held on behalf of gold-backed Exchange Traded Funds (ETFs).

Based in data from the GoldChartsRUs website, which tracks the gold holdings of gold-backed ETF holdings, we know that as of the end of November 2020, ETFs held a combined 2575 tonnes of gold in London vaults.

Excluding these ETF holdings, this would imply that a residual 1296.2 tonnes of gold was held across these seven vaults that cannot be accounted for by ETF holdings. In other words:

Since the LBMA began reporting London gold vault data (from July 2016 onwards), the latest figure of 9452 tonnes is indeed a record total. It is also higher than the approximate 9000 tonnes of gold that the LBMA claimed was held in London in late 2011 (see LBMA presentation here, page 3 of slides).

Not Explained by ETFs

Hidden within these vault holdings changes is the fact that from January to July 2020, Bank of England gold vault stocks declined by a net 31.2 tonnes, and then rose between August and November by a net 238.8 tonnes.

Interestingly, since the end of July, the additions to the LBMA gold vaults have not been flowing into gold-backed ETFs. In fact, ETF gold holdings stored in London have declined. On 31 July 2020, there were 2588 tonnes of ETF gold held in London LBMA vaults. At the end of November 2020, there were 2575 tonnes stored, i.e. 13 tonnes less. But during the same time (between July and November), the gold inventories of the LBMA London vaults rose by a net 423.2 tonnes.

This ‘residual’ amount of 1296.2 tonnes is sometimes referred to as the “London gold float”. But perhaps float is the wrong word since much of this physical gold could be held by entities such as investment institutions, family offices, sovereign wealth funds, and high net worth individuals, who are holding physical gold in allocated form and storing it in some or all of the LBMA London vaults. A 436 tonne increase in this allocated gold category could be indicating that more and more entities who previously held unallocated gold claims against the bullion banks, are now ‘allocating’ these gold claims in the form of allocated gold, while contnuing to store it in the London ‘Good Delivery’ gold storage network.