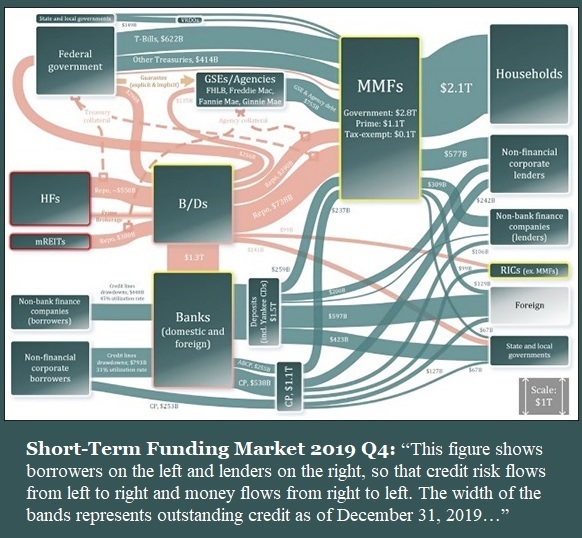 If you suffer from chronic nightmares, experience migraine headaches from stress, or have anger management issues when confronted with abject stupidity, you probably want to avoid looking at the above graph that the Securities and Exchange Commission has created to show how one of the most critical financial markets in the United States functions. Or perhaps we should say, why it’s incapable of functioning when it’s most needed.

The market is Wall Street’s Short-Term Funding Market which includes its integral repurchase agreement (repo) market. The repo market blew up in 2008 during the last financial crisis and required a Fed bailout. It blew up again on September 17, 2019 for reasons that have yet to be credibly explained and required at least $9 trillion in cumulative emergency loans from the Federal Reserve over the next six months. As we reported yesterday, the Fed appears to still be propping up that market while not reporting those Fed loans to the American people.

The SEC’s graph above is part of a report the SEC released in October titled “U.S. Credit Markets Interconnectedness and the Effects of the COVID-19 Economic Shock.” The report makes no mention of the fact that the repo market blew up on September 17, 2019 – months before there was a COVID-19 case reported anywhere in the world. Everything in the SEC’s report is framed around the idea that the COVID-19 pandemic caused all of the dislocations in the repo and related short-term funding markets. (For an in-depth look at the actual events as they unfolded beginning on September 17, 2019, see our archive of articles on this topic.)

The SEC report describes the repo loan market as follows:

“The approximately $4 trillion repo market provides secured, short-term, marked-to-market funding against various forms of securities collateral. The collateral from several short- and long-term funding markets and participants connects the repo market to the rest of the financial system. The repo market is a critical source of liquidity and, accordingly, essential to the ongoing operations of various market participants, including market makers in virtually all sectors of the capital markets.

“A repo contract in essence offers an interest-bearing cash loan against securities collateral, but the contract can also be structured to borrow securities…broker-dealers [B/Ds] (many of the larger ones being bank affiliates), MMFs [Money Market Funds], hedge funds [HFs], mREITs [Mortgage Real Estate Investment Trusts], and the Federal Reserve are the primary participants in the repo market. The MMFs are the main investors of cash (i.e., the lenders) into the repo market. Recipients of repo financing (i.e., the borrowers) include hedge funds that pledge many different securities and mREITs that mainly pledge MBS [Mortgage-Backed Securities] in repo transactions. Broker-dealers intermediate virtually all repo transactions.”

Let’s pause here for a moment and consider the fact that federal regulators, including the Federal Reserve that has been tasked with bailing out the repo loan market to the tune of trillions of dollars twice in the past dozen years, are allowing hedge funds to play a role in a critical funding market that is a core component of the U.S. financial system. Hedge funds regularly make wild, highly leveraged bets and blow themselves up at inopportune times.

The SEC admits in its report that the following can happen when there is high leverage at hedge funds:

“Collateral valuation affects the functioning of the repo market. Under normal market conditions, collateral securities are subject to relatively low and stable haircuts. Low levels of haircuts may enable repo borrowers such as hedge funds to assume significant leverage. Under less stable market conditions, the risk profile of collateral securities increases as holders of the collateral face greater uncertainty regarding the price at which they can liquidate the collateral if the borrower defaults. To protect themselves from potential losses, repo lenders may demand more substantial haircuts. This, in turn, could force repo borrowers to sell some of their positions in securities to reduce funding needs. In a feedback loop, such forced sales can exert additional pressure on collateral valuation as prices of securities decline further and lead to further increases in collateral haircuts.”

The SEC report also goes into the incestuous relationship between the mega Wall Street banks that finance and execute the monster trades for the biggest hedge funds. This is known as “Prime Brokerage.” The SEC researchers write this:

“Regulators and market participants should be cognizant of the size and structure of this segment of the STFM [Short-Term Funding Market], as it has historically exhibited a high degree of funding volatility, and it has increasingly become more concentrated with a few larger broker-dealers now dominating the business. This market is interconnected with the broader banking system, repo market, securities lending and other STFM sub-markets (via the banks who fund this business).”

If the Wall Street banks making these loans to highly-leveraged hedge funds were partnerships risking their own capital, or even investment banks risking their shareholders’ capital, that would be one thing. But under today’s nightmarish structure on Wall Street, the banks making these risky loans to hedge funds also own large federally-insured commercial banks that are backstopped by the U.S. taxpayer. This structure continues to put the entire U.S. financial system at risk, just as it did in 2008.

It is unconscionable that the SEC states glibly that “specific data about prime brokerage activity is not available.” The SEC is a federal regulator. If it wants the information, it can surely find a way to get it.

It’s not like regulators can’t contemplate the possibility that a hedge fund could take insane levels of risk that might imperil the entire financial system. In 1998 the hedge fund, Long Term Capital Management, had $4 billion of net assets but had utilized over-the-counter derivatives to increase its leverage to $1 trillion.” These turned out to be bad bets and the New York Fed had to strong-arm the major Wall Street banks to bail out Long Term Capital Management.