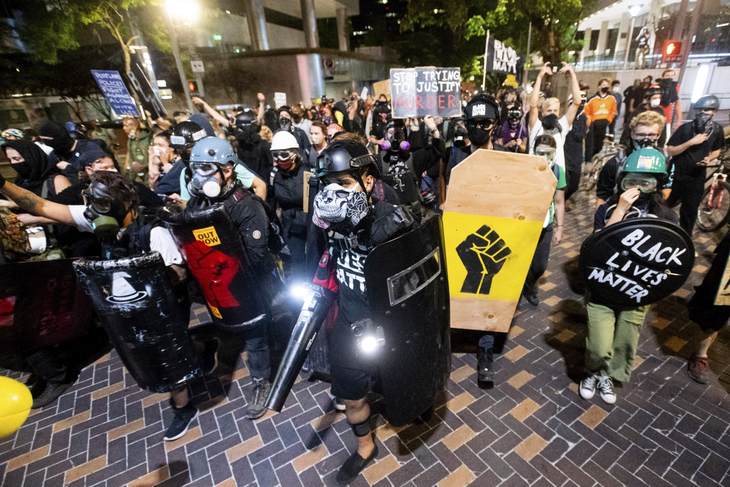 The Black Lives Matter umbrella group Detroit Will Breathe sued Detroit, alleging police abuse of force during the George Floyd riots in the city this past summer. A judge granted a restraining order in September but the city responded with a countersuit, claiming that the Black Lives Matter group organized a “civil conspiracy” to riot, destroy property, and disturb the peace.

According to Detroit’s countersuit, the protesters “illegally, maliciously, and wrongfully conspired with one another with the intent to and for the illegal purpose of disturbing the peace, engaging in disorderly conduct, inciting riots, destroying public property, resisting or obstructing officers in charge of duty, and committing acts of violence against [the city] and [Detroit Police Department] officers.”

The suit claims that police officers and the City of Detroit “sustained injuries and damages” including physical injuries, pain and suffering, property damage, loss of business opportunities, and more. The city asks the court to award “general and compensatory damages equal to” the losses the city sustained, along with punitive damages, a judgment the Black Lives Matter group illegally conspired, and attorneys’ fees.

The city claims the First Amendment does not protect the rioters’ activities because “the protests in Detroit have repeatedly turned violent, endangering the lives of police and the public.” This violence has harmed police officers, allegedly causing “cracked vertebrae, lacerations, and concussions.”

Importantly, the Detroit countersuit cites various Black Lives Matter videos Detroit Will Breathe promoted, some of which “show speakers encouraging violence or endorsing violence against police officers, promoting the destruction and defacing of property, and disrupting the lives of Detroit residents.”

The counter-lawsuit may force a Black Lives Matter group to fork over cash damages for the riots, a positive step toward justice for the riots that proved the most destructive (in terms of insurance claims) in U.S. history. While leftists repeat claims of “institutional racism,” the riots have victimized the black community. The destruction disproportionately hit black communities in Kenosha, Wisc., Minneapolis, and Chicago. The riots destroyed black lives, black livelihoods, and black monuments. At least 26 Americans have died in the riots, most of them black.