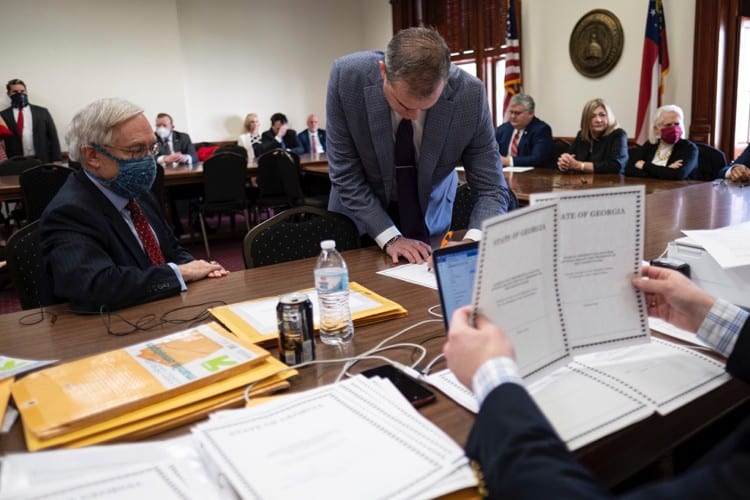 Republican elector candidates in critical swing states, including Wisconsin, Arizona, Georgia, Nevada, and Pennsylvania, met Monday and cast their votes for Republican presidential nominee President Donald Trump. Although Democratic Party nominee Joe Biden has been declared the victor in the popular vote in those states by election officials and the mainstream media, Republicans have charged that those election results were fraudulent.

Wisconsin Republican Party Chairman Andrew Hitt explained to reporters this was done “to preserve our role in the electoral process while the final outcome is still pending in the courts.”

In a constitutional tradition dating back to 1789, presidential electors met across America on Monday in their state capitols to cast electoral votes for either Democrat Joe Biden or Republican Donald Trump. In most years, when electors gather on the first Monday after the second Wednesday to formalize the presidential election, there is little drama.

But 2020 has not been like most years, what with the Chinese-originated Coronavirus that has afflicted millions of Americans, and with the bitter presidential campaign made highly controversial because of the mounting evidence of widespread fraud across multiple states in the balloting. Since early in the 1800s, state legislatures have opted to award the electoral votes of their states via the popular vote in the state, but because there have been so many allegations of fraudulent balloting, it is contested as to which candidate actually did secure the popular vote victory in several states, including Georgia, Arizona, Michigan, Wisconsin, Nevada, and Pennsylvania.

When a group of Republican-nominated elector candidates showed up at the Michigan Capitol building to cast votes for President Trump, they were turned away by Michigan state police. “The Electors are already here, they’ve been checked in,” police said in reference to the Democratic-nominated elector candidates who were already in the building. Police advised the Republicans to contact the governor’s office if they had a “problem.” Of course, the governor of Michigan is Gretchen Witmer, a very left-wing Democrat, who was unlikely to view the Republicans with much favor.

In Wisconsin, Democrat governor Tony Evers presided over the meeting of the 10 Democratic elector candidates in his office, whom he contended were the duly elected presidential electors for the state of Wisconsin. “Today we did our part to continue the long and sacred tradition of our democracy of honoring the will of the people.” But the Republican elector candidates met elsewhere in the Capitol with state party chairman Hitt and Bob Spindell, the state’s Elections Commissioner.

Arizona’s 11 Republican elector candidates also met to cast their votes for Trump. They issued a statement, explaining their bold action, in light of the fact that Biden has been certified the winner of the state’s popular vote: “Of course, there is precedent for our Republican electors meeting on December 14, even as the Democrat electors for Arizona also meet elsewhere. Democrat electors pledged to John F. Kennedy convened in Hawaii in 1960, at the same time as Republican electors met, even though the governor had certified Richard Nixon as the winner. In the end, Hawaii’s electoral votes were awarded to President Kennedy, even though he did not win the state until 11 days after the electors cast their votes.”

The statement added, “Given that the results in Arizona remain in doubt, with legal arguments still to be decided, just as the Democrat electors met in Hawaii in 1960 while awaiting a final resolution to the state’s vote, so too the Republican electors have agreed to meet this year on December 14 as we await a final resolution of Arizona’s 11 electoral votes.”

If Biden’s win in the contested states holds, he will have won the presidency by a vote of 306-232. But were Trump to somehow prevail in the multiple legal challenges, the Republicans hope the courts — or Congress — or both, will honor the votes cast today by the Republican elector candidates as the legitimate electors from those states.

Following the disputed 1876 presidential election, which Republican Rutherford Hayes eventually won by an electoral vote count of 185-184 over Democrat Samuel Tilden, Congress passed the Electoral Count Act of 1887 to address the question of counting electoral votes raised by that controversial contest. In 1876, three states — Florida, Louisiana, and South Carolina — produced competing sets of election returns and elector delegations. That dispute was settled by a compromise that allowed Hayes to take office in return for concessions to the Democrats.

But Congress, having barely averted a second civil war in 1876, wanted to establish procedures to deal with a similar situation in the future. Section 4 of the law provided that if a state submitted competing sets of returns and electors, then Congress would attempt to resolve the issue. If the House and Senate proved unable to agree on the matter, the law would then send the question back to the governor of the state or states in question.

Ironically, in the disputed election of 2000, in which Texas Governor George W. Bush, the Republican, narrowly defeated Vice President Al Gore, the Democrat, in Florida, had the law been used then, the issue would have been resolved by the governor of Florida, who happened to be Bush’s brother, Jeb Bush! In the Supreme Court case of Bush v. Gore, the justices ruled that “the state legislature’s power to select the manner for appointing electors is plenary; it may, if it so chooses, select the electors itself, which indeed was the manner used by state legislatures in several States for many years after the framing of our Constitution…. The State, of course, after granting the franchise in the special context of Article II, can take back the power to appoint electors.”

If the Electoral Count Act were used to settle this year’s presidential election, Congress would have to resolve the issue in several states, not just one. The House of Representatives, presently controlled by the Democrats, could be expected to name Biden the winner in all of the states in controversy. The Senate, with the Republicans holding a narrow 50-48 edge, is more uncertain, where there are Republicans who might abandon Trump in favor of Biden. But if any of the controversies in any of the states were left unresolved by Congress, the issue would be thrown back into the laps of the various governors of Georgia, Arizona, Michigan, Nevada, Pennsylvania, and Wisconsin.