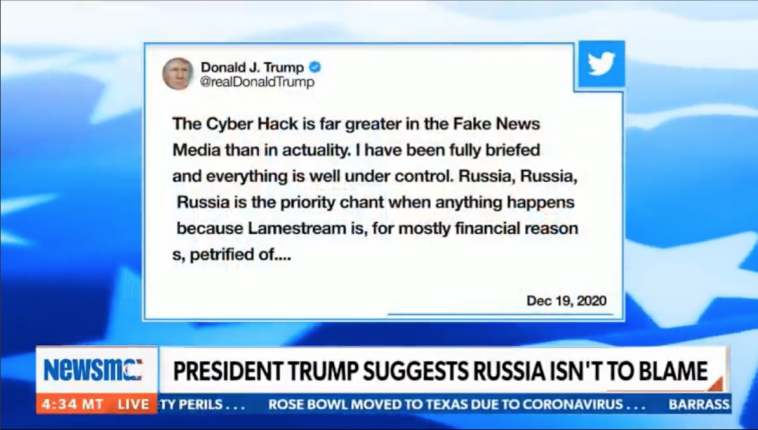 Here we go again. Allegations that agencies from the Russian Federation pulled off a major hack into the computers of half a dozen various American security agencies is the newsmaker again. Regrettably, NewsMax fell for the bait offered by Secretary of State Mike Pompeo.

Consider the weight of the allegations, but also consider the barely subtle disclaimer that the real newspiece offers. There were different opinions as to the origin of the hack. Mike Pompeo notes this is a significant effort but he only says ‘we THINK very clearly this was an act of the Russians.”

To give Newsmax credit, the first person interviewed, one Fred Fleitz, a former Chief of Staff with the National Security Council, made it clear that the alleged origin of the hack is not known beyond the shadow of a doubt to be Russia. He notes that the Trump team thought it might be China at play here.

While Mr. Fleitz acknowledges the notion that there are hackers for hire out to the government of the Russian Federation, this, too is nothing more than an allegation, and all the more unclear as applied to the screamer headline “Russian hackers did something new.”

There are some very good reasons why one can suspect this is not an act perpetrated by the Russian government:

Russia has no cause to make itself a pariah by sponsoring cyberhacking operations against US interests. The level of expertise of Russian espionage and cyberwarfare would also be such that they would not be detected so easily, and the timing – doing such an op now – is so poorly done that there is simply no rational reason to believe that the Russian government is playing games with American government agency computer systems.

Have We Now Become A Completely Lawless Nation?