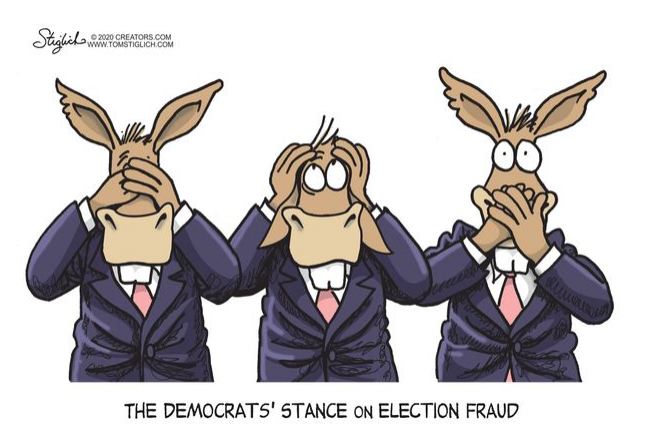 I’ve been a Las Vegas oddsmaker and sports gaming expert for four decades-long before I became known as a nationally syndicated conservative talk show host. I understand odds and gambling in a way that no other conservative media personality, host, or politician in this country could.

And I can tell you something is very wrong with this presidential election. It reminds me of a fixed football game. Remember the famous fixed 1978 game between the New York Giants and Philadelphia Eagles. The Giants quarterback handed the ball off. The running back didn’t want it. It fell on the ground. Herm Edwards of the Eagles picked it up and ran it into the end zone with seconds left for a last second victory. Every bettor in the world knows that game was fixed. It doesn’t matter if you can prove it. We all know.

Biden was awarded Virginia with Trump ahead. But Trump was ahead by a mile in Florida, Ohio, and Texas, yet Fox News refused to award him the electoral votes. I knew at that moment, something was wrong. Something smelled fishy. Something was rotten in the DC Swamp.Bettors witnessed Trump dominating. He clearly won not only those key states of Florida, Ohio, and Texas, but Trump also enjoyed large leads in the entire Midwest- Pennsylvania, Michigan, Wisconsin, and Iowa. It was all but over. Trump had an electoral landslide. Hence the massive 8 to 1 odds in favor of Trump.

And then it happened. It was the most bizarre call in Election Night history. Fox News called Arizona for Biden. Why? It wasn’t even close to over. There was no reason on earth to make that call. Arizona is STILL not over 8 days later. CNN still hasn’t awarded Arizona. ABC pulled it back from Biden only 24 hours ago.

Why would Fox News be in such a rush to call Arizona for Biden? At that moment, Trump’s odds crashed almost instantly from 8 to 1, back down to 2 to 1. That drop set off alarm bells. My friend, who is one of the biggest bookmakers in the country, called me to say, “Wayne, something is wrong. I’ve never seen a drop like that, let alone a drop that fast. How can Trump go from 8 to 1 to 2 to 1? Someone knows something. We’ve got a problem.”

It was as if someone had decided in advance to give Arizona to Biden- whether he won it or not. It was as if the secret code was known to only a few billionaire gamblers, “Fox News awards Arizona to Biden.” Six magic words. Someone was ready for that call. Someone waited until Trump was a prohibitive 8 to 1 favorite, then knew to bet millions of dollars on Biden at the longest odds of the night. Someone knew the fix was in. Someone made a fortune.