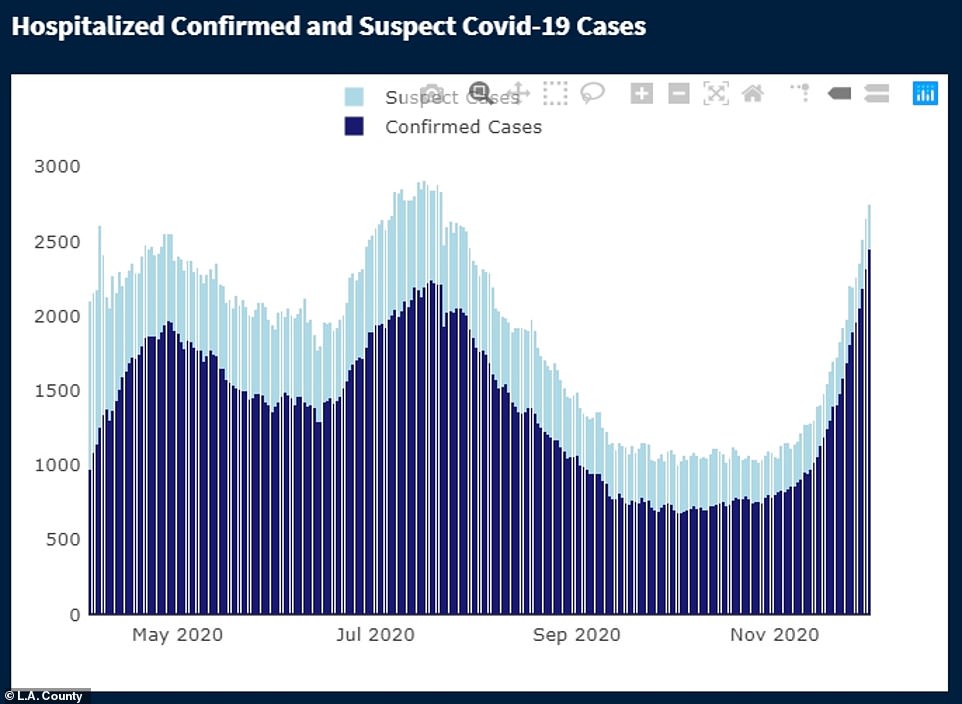 Los Angeles residents have been ordered to stay in their homes effective immediately under new lockdown measures put in place by Mayor Eric Garcetti that closes non-essential businesses, bans all travel including walking and prohibits social gatherings outside a single household.

The new order, which was announced late yesterday, applies to the city’s 4 million residents as COVID-19 cases and hospitalizations surge.

The city, which is the second-largest city in the country, was told the new move was ‘necessary for the protection of life and property in the City of Los Angeles’.

Garcetti urged residents to ‘cancel everything,’ saying no one should be hosting gatherings or going to gatherings. Those who break the rules may potentially be arrested, he warned.

It comes as Los Angeles County, which is home to the city and has about 10 million residents total, reported surges in daily cases with 6,000 infections recorded yesterday.

According to the order, ‘all travel, including, without limitation, travel on foot, bicycle, scooter, motorcycle, automobile, or public transit is prohibited’.

However, essential needs such as food, healthcare services, social services and others, are outlined as exceptions in the order.

‘My message couldn’t be simpler: It’s time to hunker down. It’s time to cancel everything. And if it isn’t essential, don’t do it.’

‘Don’t meet up with others outside your household. Don’t host a gathering, don’t attend a gathering and follow our targeted safer-at-home order, if you’re able to stay home, stay at home. Just be smart and stay apart.’

The order, however, appears to have confused residents with its long list of exemptions. Some of those include allowing beaches to remain open for swimming and sunbathing, trails to operate during normal business hours. And, perhaps most confusingly, it also orders that all day camps for children need to cease operations between the hours of 10pm and 5am.