The Michigan Senate Oversight Committee on Tuesday held a hearing in Lansing on election fraud and irregularities.

A Dominion-trained IT contractor named Melissa Carone absolutely blew up the Michigan hearing on Tuesday.

Melissa Carone dropped many truth bombs, blew the whistle on Dominion workers and revealed ballots were being tabulated in the Department of Elections which is completely illegal.

Ms. Carone stunned the Michigan state lawmakers when she revealed there were tabulation machines at the Department of Elections.

Carone wasn’t even supposed to talk about it today. She said it was supposed to be revealed next week but she blew the whistle today anyway.

Carone also revealed that batches of ballots were being scanned 8-10 ten times.

She said the boxes that were supposed to receive the scanned ballots were moved to another part of the room and used to block poll observers.

Melissa Carone also said one of the Dominion workers disappeared to a “warehouse” for several hours right before a big data dump for Joe Biden.

Melissa Carone gave a very compelling testimony and stunned the lawmakers sitting on the panel. 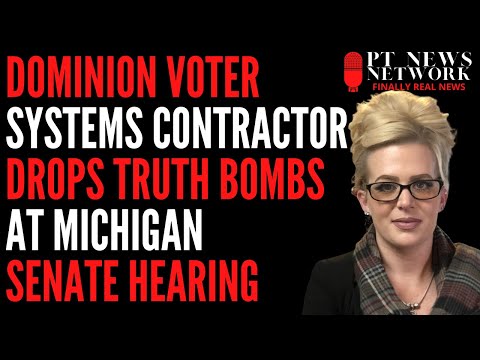