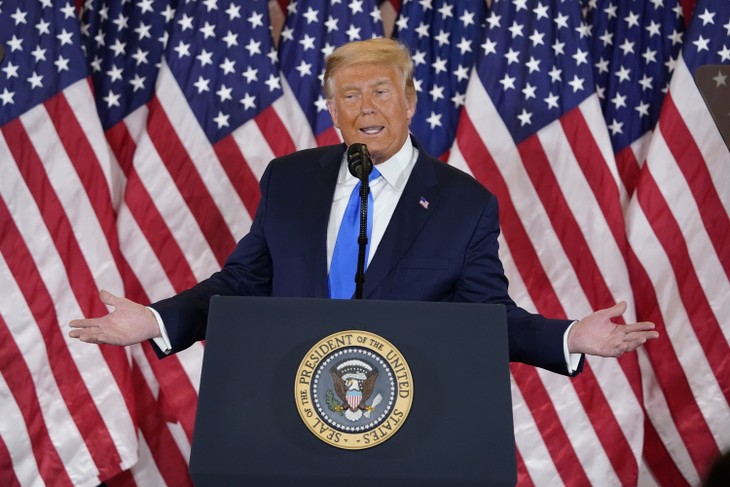 President Trump made a quick appearance at the White House on election night while several key races still hung fire and told supporters he was expecting to have a celebration, but “all of a sudden the election is …off.”

His appearance came about two hours after Joe Biden stayed up late to say thanks to his supporters and set the expectation that he’d have more positive news on Wednesday.

His appearance came about two hours after Joe Biden stayed up late to say thanks to his supporters and set the expectation that he’d have more positive news on Wednesday.

Because of outstanding mail-in ballots that flooded elections centers, when many battleground states switched their election laws due to COVID, calling races on election night seemed to take forever, especially over at Fox News. The crew at Fox took an embarrassingly long time to call Texas for Trump—when it was obvious the president had won—and made a remarkably quick call for Biden in Arizona, saying the state had flipped from Republican to Democrat.

The behind-the-scenes to and fro could be seen in the faces and actions of the Fox News crew who were obviously getting calls from Trump-land demanding the network show its work. The network called out a couple of its decision desk card-counters to defend their call.

The president said he was ahead by insurmountable leads—690,000 in Pennsylvania and almost 300,000 votes in Michigan. “We’re winning Wisconsin,” Trump said. “It’s also clear that we have won Georgia. We’re up by 2.5% and up 77,000 up in North Carolina. They can’t catch us. And we’re winning Pennsylvania by a tremendous amount of votes.”

With 93% of the votes counted in Georgia, the president has a three-point lead, but he’s not getting the calls from the networks for his victories.

The media’s polls were very wrong. But they won’t admit it.

Trump is currently up in Michigan, Wisconsin and Pennsylvania.

So the media will now help the Democrats extend deadlines to go looking for additional votes over the next days.

Trump looked into the crowd to Newt Gingrich and said, “I told you, Newt, there would be major fraud in our nation” and announced that he’d go to the U.S. Supreme Court to stop the voting.

We knew Pennsylvania would end up in court because of the Supreme Court’s reticence to get involved before the election, but as former federal prosecutor Andy McCarthy said on Fox News, the court should have settled the issues before the election because it will be a disaster.

And guess what? It appears to be just that.

See the president’s remarks below.