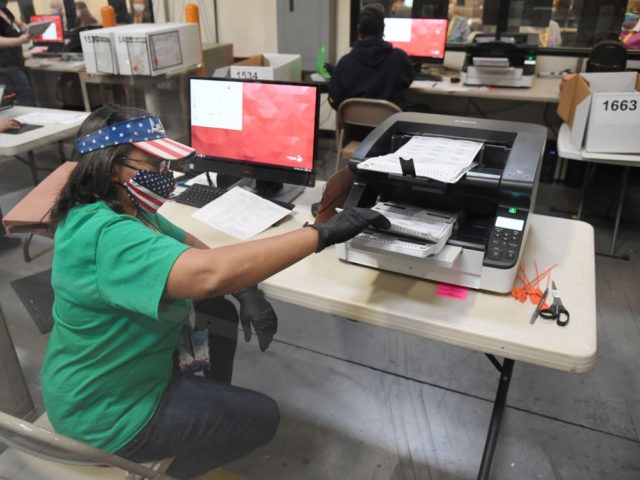 A whistleblower who worked for Nevada’s Clark County Elections Department listed a series of instances of nefarious behavior they witnessed in the days leading up to the election, including poll workers processing illegitimate ballots as well as non-poll workers forming a “human wall” near a Biden/Harris van to block the view of individuals purportedly filling out what the whistleblower believes to have been ballots.

In a sworn affidavit signed November 8, the whistleblower, who served as a poll worker, detailed “concerns over election polling place intimidation and voter fraud.”

One of the main concerns revolved around what the whistleblower described as the processing of illegal ballots. According to the affidavit, a team leader and two assistants told poll workers to advise those who wanted to register to vote but did not have the proper ID to make an appointment with DMV.  They were then told that they could bring in proof of their appointment confirmation — which the whistleblower described as “either a paper copy or show icon [on] their phone to us” — and be registered based on that confirmation alone.

“They were then permitted to vote with a provisional ballot, even though their appointments were not until January of 2021. We were told this was being allowed all over the Valley, at all polling places,” the affidavit reads.

Poll workers were allegedly instructed to “add two zeros (’00’) to the DMV confirmation number and put it where the Driver’s License/ID number was supposed to go when we filled in the registration form on the line.”

The whistleblower also detailed the consistent presence of a Biden/Harris bus, tent, or table in the parking lot, which offered “food, drink, and political memorabilia to voters.”

“It was a very visible feature in a very narrow parking lot. On several days they had speakers, dances, music and other festivities going on,” the affidavit reads.

The whistleblower alleges that the team leader had to repeatedly address the Biden/Harris group, reminding them to maintain a 100-foot distance from the polling place.

The whistleblower also detailed an incident observed during a lunch break. In late October, the whistleblower “personally witnessed two people handing multiple unopened mail-in ballot envelopes to two other people who then opened and filled out the ballots against the side of the Biden/Harris van.”

“The same two people who marked the ballots then put the marked ballots in official pink and white envelopes. These individuals were not poll workers,” the affidavit reads. Others then formed what the whistleblower described as a “human wall” in an apparent attempt to block the view of the individuals handling the envelopes: