She is doubling down on her war against the 1st Amendment.

Michigan attorney general Dana Nessel has issued an ominous threat to whistleblowers against electoral fraud in her state: Shut up, or potentially be prosecuted.

She responded to former state senator Patrick Colbeck’s whistleblower testimony. Colbeck was on the floor as tens of thousands of mystery ballots were delivered to the absentee voter counting board in Detroit on election night.

Nessel made the comment that whistleblowers may be prosecuted for a crime if they come forward to authorities. Colbeck has not gone to Nessel, who has threatened to prosecute Republican leaders who refuse to certify the fraudulent vote before an investigation, with his first-hand testimony.

“I can confirm that Patrick Colbeck has never made a complaint of election fraud to the Michigan Dept of Attorney General. If he had, we would have fully investigated said claim,” she wrote in tweet.

“Colbeck’s assertions aside, intentionally making a false claim of criminal activity to law enforcement is itself a crime. It’s been my experience that is often the reason certain reports are not made,” she added.

However, Colbeck has signed a sworn affidavit under the penalty of perjury attesting to rule-breaking and other forms of fraud committed by inner-city riggers in Detroit on election night. The fake news media, Democrat Party hacks, liberal activist judges, and other establishment co-conspirators have attempted to dismiss sworn affidavits in order to excuse the immense corruption that happened during the vote.

Colbeck is one of the hundreds of whistleblowers who are being ignored in the psychotic rush to coronate Biden as president following third-world style election mayhem.

Big League Politics has reported on how Nessel threatened state Republican leaders with criminal charges for simply having a meeting with President Trump:

There is a massive terror operation that is in place to bully and intimidate whistleblowers and Republican leaders into rubber-stamping a presidential election marred with irregularities before real investigations can begin.

Michigan attorney general Dana Nessel, who sent a threatening cease-and-desist order to Big League Politics over our reporting on electoral abnormalities, is now threatening Republican leaders who recently met with President Donald Trump. She is spinning a baseless conspiracy theory to justify her threats and abuse of power.

The Washington Post has reported that Nessel “is conferring with election law experts on whether officials may have violated any state laws prohibiting them from engaging in bribery, perjury and conspiracy.” Before Michigan senate majority leader Mike Shirkey and house speaker Lee Chatfield decided to meet with Trump, they were warned by University of Michigan Law School professor Richard Primus that the meeting “threatens the two Michigan legislators, personally, with the risk of criminal investigation.”

Conservative legal scholar Jonathan Turley explained that Democrats in the state of Michigan are essentially criminalizing any investigation into voter fraud that has been substantiated in countless sworn affidavits from whistleblowers.

“What is most disturbing is that, if there was an objection to voting irregularities or fraud, these legislators would be acting under their state constitutional authority. They would be investigated for carrying out their official duties under state law,” he noted…

The Democrats are stooping to new levels of treachery to sweep concerns about the election under the rug. President Trump has his work cut out for him to restore electoral integrity and make sure every legal vote counts in this year’s election.

Nessel is showing exactly what empowered LGBT activists think of the Bill of Rights and Constitution by perpetrating this shameful cover-up of electoral impropriety. 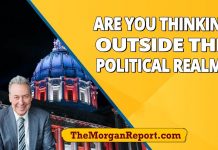 Are You Thinking Outside the Political Realm?