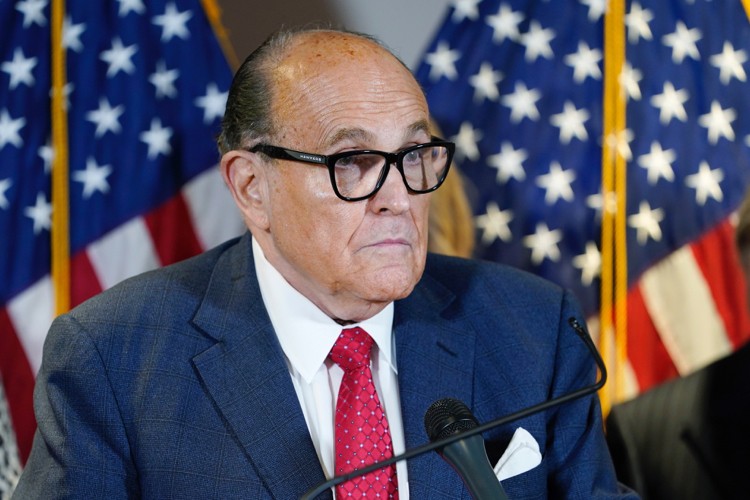 On November 19 an extraordinary press conference was held, led by former New York Mayor Rudy Giuliani, powerhouse attorney Sidney Powell, and Trump legal adviser Jenna Ellis. Backed by additional members of President Trump’s legal team, the group provided what they described as an “opening presentation” that detailed the direction their subsequent legal challenges would take and provided examples of some of the large amounts of evidence that they said they had received or collected. Anyone watching the conference live as it happened could not have been anything but impressed with the gravitas and enormity of the event, of the intense yet calm presentation by former mayor Giuliani, of the terrifying implications of the situation as presented by Sidney Powell, and of the intensity and passion for justice displayed by Jenna Ellis.

It is likely that history will record this press conference, in fact, as a seminal event.

You will not know this, however, if all you read or see or hear about the press conference is delivered to you by the mainstream media. No longer making any pretense to be practitioners of journalism intent on giving the American people unbiased information, almost uniformly today’s media have become a mere propaganda organ for the international socialist establishment. Shockingly, they do not even perform in this role with even a basic level of competence, as demonstrated by their “reporting” of the press conference. In any debate when one party resorts to relying on mere personal attacks and name calling, you know that that side has lost the argument on its merits, or never had a case in the first place. This is exactly the situation that the mainstream media finds itself in with regard to the matter of vote fraud in general and this press conference in particular.

Shortly after the press conference, the UK’s Daily Mail led off the campaign of insults targeted at Giuliani and his team. The former mayor of New York “delivered a rambling monologue,” the paper reported. His comments amounted to “an extended rant,” the paper also complained. The paper couldn’t help but smirk, editorially, about the fact that Giuliani was sweating. “As the two-hour long spectacle unfolded, two streaks of brown dye rolled inexorably down 76-year-old Giuliani’s face, apparently unnoticed by the former mayor and presidential candidate, who wiped his face and forehead repeatedly with a white handkerchief,” the paper said.

In sum, the Daily Mail’s initial “coverage” of the press conference was intended to disparage the presenters in order to leave readers with the impression that they were mere kooks with no evidence. This despite the legal team brandishing an affidavit and referencing the existence of many others.

The UK paper was not the only one to embarrass itself in such manner.

Another media outlet, this one more high-brow in nature, that joined the fray was The New Yorker. Staff writer John Cassidy said that Giuliani was “like a sumo wrestler in a sauna.” When he opened a water bottle for a drink, Cassidy said, the former mayor “gulped down its contents like a camel happening upon an oasis.” Of the Trump legal effort and the press conference in particular, Cassidy called it a “circus” and an “outlandish, anti-democratic venture [that] has no antecedent in modern American history.”

The faux-conservative National Review said the press conference was “the most outlandish and irresponsible performance ever by a group of lawyers representing a president of the United States.”

How out of step that is with conservative thought is illustrated by a comparison of the National Review point of view with that of Rush Limbaugh. Rush said in a segment on his show that in his opinion Giuliani team believes in the Constitution. “They believe in protecting the integrity and the dignity of the Constitution and of our electoral system, and if Trump had this thing pulled out from under him, they want it restored. But they’ve got four or five people here, whatever staff members, four or five people here doing the job that an entire subagency of the FBI would be assigned to here, except it hasn’t been. Why? Can you say deep state, folks? We’re up against what we’ve always been up against here.”

It seems that National Review is about as concerned about the Constitution, the truth, and the fate of the nation as MSNBC.

Speaking of which, on MSNBC, Chuck Todd called the press conference “an SNL skit of sorts” that was “bonkers.” Todd also joined the mainstream narrative that Giuliani did not present any evidence, a blatant lie since Giuliani had a copy of an actual affidavit with him during the press conference and made repeated reference to other witnesses.

To be clear, sworn affidavits and witness are evidence in a court of law. They are a written record of evidence that must come from the first-hand knowledge of a witness. Providing false information in an affidavit is to commit the crime of perjury, and a person committing such a crime can be, and likely would be, prosecuted accordingly. Thus, affidavits cannot be dismissed as non-evidence.

Cornell’s Legal Information Institute provides a succinct and pointed description of an an affidavit. It is, the organization says, “A voluntarily sworn declaration of written facts. Affidavits are commonly used to present evidence in court.”

In fact, during the press conference itself, Giuliani pointed out that “journalists” were not doing their jobs because they were not investigating the evidence the was plainly available.

“There are many more affidavits here. I’d like to read them all to you, but I don’t have the time. You should have had the time and energy to go look for them,” Giuliani said. “It’s your job to read these things and not falsely report that there’s no evidence. Do you know how many affidavits we have in the Michigan case? Two hundred twenty affidavits. They’re not all public, but eight of them are,” he continued.

Interviewing Sidney Powell following the press conference, legendary Boston broadcaster and journalist Howie Carr, referencing his experience covering court proceedings, asked her if she would be able to go beyond affidavits and present actual “smoking guns” proving vote fraud in the election in court. Powell responded: “We’ve got a number of smoking guns. And we may have to get witness protection for them.”

Following up, Carr asked: “You’re going to be able to show votes changing. I mean, we’ve seen the computers, the freeze frames on the TV screens of the votes changing, or on the computer screens. Are you going to have the actual solid evidence that those votes were being changed by these companies?”

Powell responded: “We have a lot of extremely solid evidence. It’s beyond impressive and absolutely terrifying.”

Contrary to the mainstream narrative, Sidney Powell is a serious and experienced attorney, as is Rudy Giuliani and the rest of the Trump campaign legal team. If they say they have evidence of widespread voter fraud and of an international criminal enterprise aimed at undermining the Presidential election, that is a very serious matter that deserves serious treatment and inquiry from the press.

Ep. 1440 A Real Plan to Fight Back Against the Tech Tyrants – The Dan Bongino Show

I just filed Articles of Impeachment on President @JoeBiden .