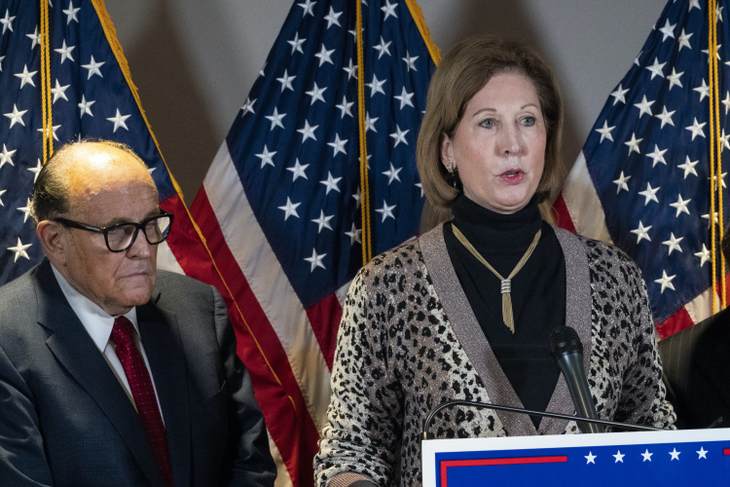 Defense Attorneys Sidney Powell, Lin Wood and others have filed a lawsuit in Georgia demanding that the results of the 2020 election be set aside because of “massive election fraud” and foreign influence in the election. The lawsuit claims that 96,600 mail-in ballots “were fraudulently cast” and that “136,098 ballots were illegally counted as a result of improper manipulation of the Dominion software.”

Powell, a high-profile attorney who represents former Trump National Security Advisor General Michael Flynn, asks that the governor be enjoined from certifying the election. The 104-page lawsuit claims that Gov. Brian Kemp, Sec. of State Brad Raffensperger, and the chair and members of the Georgia State Elections Board failed to police the alleged fraud, including “multiple violations of Georgia laws, including O.C.G.A. §§ 21-2-30(d), 21-2-31, 21-2- 33.1 and §21-2-522, and multiple Constitutional violations, as shown by fact witnesses to specific incidents, multiple expert witnesses and the sheer mathematical impossibilities found in the Georgia 2020 General Election.”

The lawsuit, co-filed with attorney Lin Wood and an Atlanta attorney, asks a judge to set aside the results of the election in a permanent injunction; enjoin elections officials from certifying the election; demands that all voting machines be subjected to forensic assessment; and asks that election officials produce 36 hours of surveillance video of “all rooms used in the voting process at State Farm Arena in Fulton County, GA from 12:00am to 3:00am until 6:00pm on November.”

The lawsuit, filed on Wednesday, also alleges that Georgia’s sloppy mail-in balloting was responsible for thousands of shady, illegal votes.

Plaintiff’s expert also finds that voters received tens of thousands of ballots that they never requested. (See Exh. 1, Dr. Briggs’ Report). Specifically, Dr. Briggs found that in the state of Georgia, based on a statistically significant sample, the expected amount of persons that received an absentee ballot that they did not request ranges from 16,938 to 22,771. This range exceeds the margin of loss of President Trump by 12,670 votes by at least 4,268 unlawful requests and by as many as 10,101 unlawful requests.

She alleges that voters were denied their due process because the fraud diluted their votes and treated the mail-in ballots differently in different counties, which is similar to what Trump attorneys have alleged in the Pennsylvania election case.

The lawsuit alleges that “rogue actors” were able to manipulate the voting software.

Russell Ramsland confirms that data breaches in the Dominion software permitted rogue actors to penetrate and manipulate the software during the recent general election. He further concludes that at least 96,600 mail-in ballots were illegally counted as they were not cast by legal voters.

The lawsuit used some of the open-source statistics that Matt Braynard has put out on his Twitter account. Braynard was a 2016 data chief for the Trump campaign. He put out a video outlining his findings on YouTube.

Note: Budget and audit coming next week along with white paper, data release.