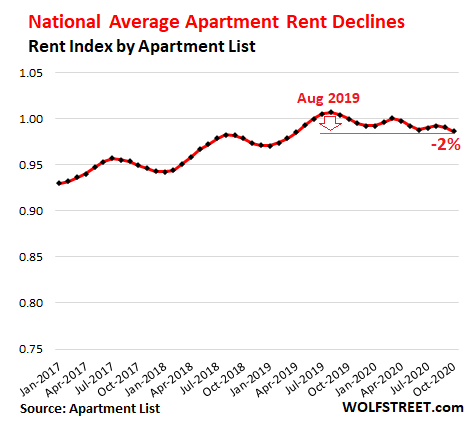 Like so many trends, the growth in the number of single-family houses for rent, and the increase in rents at those houses, preceded the Pandemic, but the Pandemic has accelerated them. In September, single-family rents across the nation rose 3.8% from a year ago, according to the Burns Single-Family Rent Index (chart by John Burns Real Estate Consulting, click to enlarge): 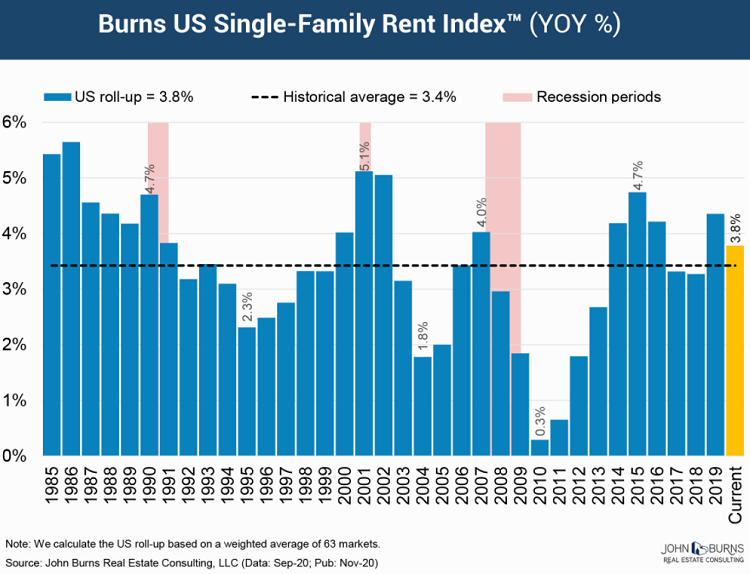 “Landlords are able to raise rents right now at a rate that is high in normal times,” Rick Palacios Jr., head of research at John Burns, told the Wall Street Journal. “It’s ridiculously high when you put it in a backdrop of a recession.”

This is in stark contrast to the apartment markets in expensive cities such as New York City, San Francisco, Boston, Seattle, Los Angeles, Washington DC, etc., where double-digit rent declines are now the rule.

In terms of national apartment rents, the sharp declines in apartment rents in major markets has overpowered the rent increases in many smaller markets and has caused the national average rent to decline, according to Apartment List data. In October, it was down 1.4% year-over-year and 2% from August 2019:

The report by John Burns notes that the single-family rent increase of 7.3% in Sacramento occurred even though the city lost 8.6% of its jobs, which should normally put downward pressure on rents, but not this time, as rents are “likely benefiting from Bay Area transplants seeking extra space while working from home.”

This parallels the trend in the multi-family apartment market: while rents in apartment buildings plunged over 20% in San Francisco, they surged 11.5% in Sacramento.

Even within San Francisco, rents in single-family houses ticked up 1.5%, according to John Burns data, though rents in apartment buildings plunged over 20%.

Same in New York City: single-family rents ticked up 1.4% according to John Burns, while rents in apartment buildings dropped around 16%.

The five rental markets with the smallest increases in single-family rents, with the exception of Houston, are experiencing “an acceleration in outmigration fueled by COVID,” which suppressed the ability to raise rents, according to John Burns Real Estate Consulting.

Until the Financial Crisis, single-family rental houses were largely the playground of smaller landlords. But during the Housing Bust, PE firms, with support and encouragement from the Fed and with Wall Street funding, piled into this business, each buying tens of thousands of houses out of foreclosure, thereby becoming mega-landlords. And the number of single-family rentals surged during that time, to reach 15.6 million by the end of 2014. Since then, growth has slowed, but has continued.

These PE firms later spun off their single-family rental entities into publicly traded REITs. The largest two are Invitation Homes [INVH], with over 79,000 houses; and American Homes 4 Rent [AMH], with over 53,000 houses.

There are a number of reasons why single-family rents are holding up despite the declines in apartment rents in the largest most expensive markets, according to John Burns Real Estate Consulting: