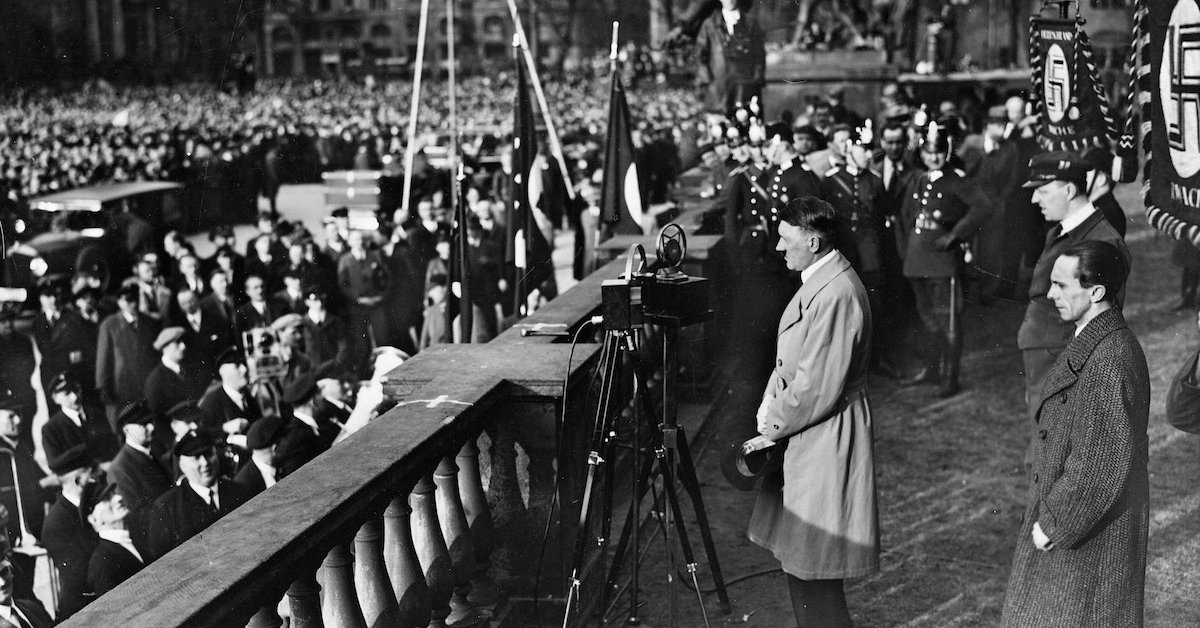 Sadly, this has become common throughout both the mainstream and social media. With both sides calling the other Nazis, it might be a good time to ask some fundamental questions:  Who were the Nazis, and what do they stand for?  Few people can answer that correctly, despite their strong emotional attachment painting their political foes as such.

To understand the Nazis accurately, you have to read their own quotes and propaganda. The story told by the Nazis themselves depicts a very different party than what modern journalists would like us to believe. The Nazi (National Socialist German Workers Party) or National Socialists as they called themselves, had the following five key characteristics:

I’ll describe each point in detail using the words of Biden’s favorite cited Nazi, Joseph Goebbels.  As the Nazi propaganda minister, it was his job to clearly articulate the core philosophy of the party to the masses, and he was ruthlessly brilliant at it.

Point 1:  The Nazis were a self-proclaimed socialist movement that called for the end of capitalism, abolishment of non-labor income (interest and finance), and proposed an all-powerful central authority to regulate the market.

Joseph Goebbels could not have been more clear on this topic:

It would not be surprising to see any of those quotes on placards at an Occupy Wall Street or Bernie Sanders rally.   I could fill the next ten pages with Goebbels quotes on the virtues of socialism, so how do liberals justify grouping fascists/Nazis with the free market capitalists?

There are two primary arguments made by the academic community.  First, they state that the definition and practice of fascism does not include government directly controlling the means of production, and this is an administrative detail at best.  But fascism and socialism both pitch that all decisions and authority reside with the state. If you were to create a scale of authoritarianism, fascism and socialism would be holding hands on the extreme side of it. The majority of modern “socialist” platforms, from our Democrats to the Chinese communist party, actually practice the fascism brand of socialism by regulating private industry.  Second, academics claim the communists were the mortal enemies of the Nazis party.  This part was true, but not for any anti-socialism reasons cited by academics.In 1939, there was a break between Hitler and Stalin when Hitler abrogated the Molotov-Ribbentrop pact and invaded Poland in 1939, and from there on out, Stalin’s communists claimed their onetime allies the Nazis were suddenly of the ultra right. The Nazis and communists were pitching very similar socialist visions to win over the same hearts and minds. In Goebbels’s words:

So why the bad blood between two self-proclaimed socialists?  The philosophical problem the Nazis had with some of the communists, in the Marxist belief that the state would fade away after the socialist utopia was achieved. This contradicted the strong statist pitch of the Nazi party that was resonating with Germans who were being “oppressed” by anti-German sanctions.  The Nazis had glommed onto the Soviet apostate Trotskyites, who were fomenting revolution in Germany under the rubric of withering away of the state, and claimed that their brand of communism made their zeal for the state insufficient. Never mind the small detail about iron ruler Stalin and runaway Trotsky, two of the late Lenin’s battling lieutenants, being out to kill each other.  Again, Goebbels explains:

Lenin, as it happens, had to sacrifice Marx, at least temporarily, when his socialist expropriations triggered a famine in 1921, threatening to topple his regime. It was one of many that communism triggered in Russia and the U.S.S.R. But any philosophy that minimized the importance of the state was the enemy of the Nazi party, whether it be free market capitalism or Lenin’s temporarily suspended communism.  National Socialism was the same sort of socialist movement we see the left wing of the Democratic party pitching today.

Point 2:   Racial identity politics was used to identify an oppressor class (Jews), that embodied both the evil nature of capitalism and the anti-German aspects of communism

Every socialist movement’s primary foundation is class struggle.  The working class is made to believe, right or wrong, that it is oppressed by a small group of wealthy individuals that rig the economic system in their favor.  The Nazis used the economic success of some of the Jewish people to foment hatred from the working class.   As Goebbels put it:

The Nazi regime was able to marry the class hatred inherent in socialism with the identity politics of anti-Semitism to create a common enemy for the German people to rally against.  Any political party that tries to gain political power by blaming a particular race for the suffering of other races, especially in the context of a capitalist system, can thank the Nazi party for the playbook

.Point 3:  Strong nationalistic pride was a core pitch to the people to justify a stronger central authority

Following World War I, Germany was not only in heavy war debt, but was responsible for paying reparations as per the Treaty of Versailles.  Humiliated by the defeat, and afflicted by a crumbling economy unable to afford the reparation payments, the German people were suffering.  The Hitler message of national pride resonated among a group of people whom the world hated at the time.  Again, Goebbels explains their position: