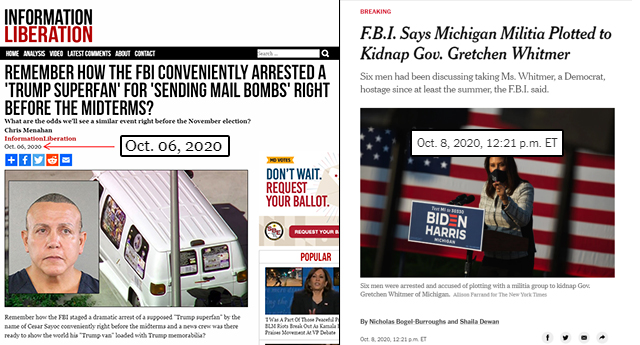 Just two days ago, I wrote an article titled “Remember How The FBI Conveniently Arrested A ‘Trump Superfan’ For ‘Sending Mail Bombs’ Right Before The Midterms?” where I went over how suspicious that case was and asked, “What are the odds we’ll see a similar event right before the November election?”

Today, the FBI announced they allegedly busted a plot by a “Michigan militia” (loaded with undercover agents and government informants) to kidnap Gov. Gretchen Whitmer because of her aggressive lockdown measures.

According to reports, it appears the FBI has been sitting on the case for months just waiting for the perfect time to drop it for maximum political impact.

Michigan militia members are accused of plotting to kidnap Gov. Gretchen Whitmer and potentially kill other state officials in an effort to overturn the government, according to a criminal affidavit filed in federal court by the FBI.

“In early 2020, the FBI became aware through social media that a group of individuals were discussing the violent overthrow of certain government and law-enforcement components,” says the Oct. 6 filing in the U.S. District Court Western District of Michigan.

According to the court record, 15 militia members from “several states,” including two from Michigan, met in Dublin, Ohio on June 6 to discuss taking “violent action against multiple state governments that they believe are violating the U.S. Constitution.

” … Several members talked about murdering ‘tyrants’ or ‘taking’ a sitting governor. The group decided they needed to increase their numbers and encouraged each other to talk to their neighbors and spread their message.”

Five Michigan men and another man from Delaware were were eventually charged with conspiracy to commit kidnapping.

Following the Ohio meeting, one of the Michigan suspects contacted leaders of a Michigan-based militia for assistance with the plan, the court filing said.

The FBI already had an undercover informant from within the militia that was developed after law enforcement learned of the group’s earlier plans to “target and kill police officers.”

An informant reported to the FBI that during the June 6 meeting in Ohio one of the men now charged in the case said he needed 200 men “to storm the Capitol building in Lansing, Michigan, and take hostages, including the Governor,” the FBI affidavit said. The suspect “explained they would try the governor of Michigan for ‘treason,’ and he said they would execute the plan before the November 2020 elections.”

Following that meeting and the connection with the unnamed Michigan militia, planning sessions were held at a shop in Grand Rapids during June, the FBI said. Attendees access the meeting space “through a trap door hidden under a rug on the main floor,” according the FBI affidavit said.

Discussions included plans to use “Molotov cocktails” in an effort to destroy police vehicles during an attack on the Capitol in Lansing and the scheduling of an armed training session in July.

At a June 28 meeting in which audio was recorded, the FBI affidavit says one of the men charged described kidnapping Whitmer from her vacation home. He called it a “snatch and grab.”

The investigation continued to gather information about a conspiracy to enact violence against Whitmer, generally through phone calls recorded by an informant. The FBI affidavit said the suspects conducted surveillance on the governor and properties she owns throughout September.

Between Sept. 14 and the Nov. 3 election, the suspects talked about training and raising money for explosives and other supplies, including $4,000 for an 800,000-volt Taser, in preparation for the attack, the court filing said.

“The F.B.I. said it had learned about the group by intercepting encrypted messages and because it had undercover agents and confidential informants working with the group,” The New York Times reported.

The Times and the rest of the media are making sure to try and imply the plot may have been connected with Trump tweeting back in April, “LIBERATE MICHIGAN!”