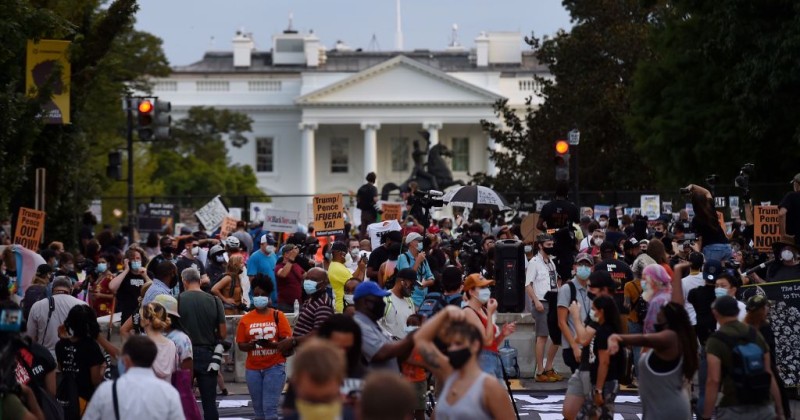 Shut Down DC vows to target members of Congress at their homes.

A far left group is vowing to “make sure Trump leaves” the White House after the election, even if he wins, with radicals preparing to storm and occupy DC.

The Shut Down DC group says it will “be in the streets before the polls even close,” asserting that “Trump will not leave office without mass mobilization and direct action.”

“On Election Day, when you’re done voting, doing election protection, or getting out the vote, come join us at Black Lives Matter Plaza,” states the group’s manifesto.

“We’re inviting everybody who agrees with these organizing principles to work together to make this uprising happen. We’re going to make sure Trump leaves.”

Quite how the group is going to make Trump leave the White House on election day is somewhat baffling, given that even if he loses he doesn’t have to officially leave office until next year.

The extremist group is planning to block highways, shut down ports and occupy state capitols if Trump “tries to steal the election” (ie wins it), while also vowing to harass members of Congress at their own homes.

Bragging about how mobs of leftists protested outside Sen. Lindsay Graham’s (R-SC) house before sunrise, the organization is conducting “mass rebellion training” in the event of Trump attempting a “coup”.

If a right-wing group had published such a manifesto, it would be nationally demonized as a domestic terrorist outfit and face immediate federal investigation.

As it is, Shut Down DC’s call to arms has received virtually no mainstream media attention whatsoever.