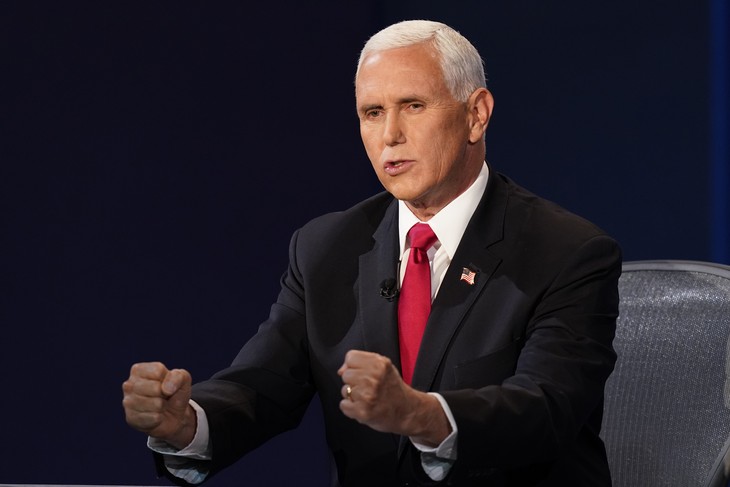 Vice President Mike Pence dissected each of the arguments for Democratic nominee Joe Biden and his running mate, Kamala Harris, during the vice-presidential debate. Pence schooled Harris on issues ranging from the coronavirus pandemic to packing the Supreme Court to the Green New Deal and from China to the riots to the false “white supremacy” attacks on Trump.

Pence treated both Harris and USA Today‘s Susan Page (the moderator) with grace, although he did speak beyond the time he was allotted. Harris also did so, and it appeared that Page cut Pence off more frequently than she cut off Harris. Harris, frequently a prickly debater, came off as very condescending.

Some legacy media outlets may claim that Pence hogged the stage, but according to CNN, the two vice-presidential candidates spoke for almost exactly the same amount of time, 36 minutes.

First, Pence hit Biden and Harris on the coronavirus pandemic. The vice president noted that Trump did “what no other American president had ever done, he suspended all travel from China.”

“Joe Biden opposed that decision, he said it was xenophobic and hysterical,” the vice president continued. Indeed, Biden did oppose the ban. Yet the China travel ban “saved hundreds of thousands of American lives.”

Next, Pence hit Biden on plagiarizing Trump’s policy response to the pandemic, joking about Biden’s history with plagiarism (he withdrew from the presidential race in 1988 after confessing to it).

Vice President @Mike_Pence on the Biden-Harris coronavirus plan: “When I look at their plan that talks about advancing testing, creating new PPE, developing a vaccine, it looks a little bit like plagiarism, which is something Joe Biden knows a little bit about.”#VPDebate pic.twitter.com/f9Iwmylgib

Pence also called out Kamala Harris for saying she would refuse to take a vaccine that President Trump recommended, suggesting that the Trump administration’s approval process is unreliable. “The fact that you continue to undermine public confidence in a vaccine, if a vaccine emerges during the Trump Administration, I think is unconscionable. Senator, I just ask you, stop playing politics with people’s lives,” Pence declared.

The vice president also slammed the Obama-Biden administration’s response to the 2009 H1N1 swine flu pandemic. “Before the end of the year, when Joe Biden was vice president of the United States, not 7.5 million people contracted the swine flu, 60 million Americans contracted the swine flu,” he noted. “If the swine flu had been as lethal as the coronavirus in 2009 when Joe Biden was vice president, we would have lost 2 million American lives.” Indeed, as PJ Media’s Matt Margolis reported, COVID-19 is nearly 4 times more infectious and 13-20 times more deadly than H1N