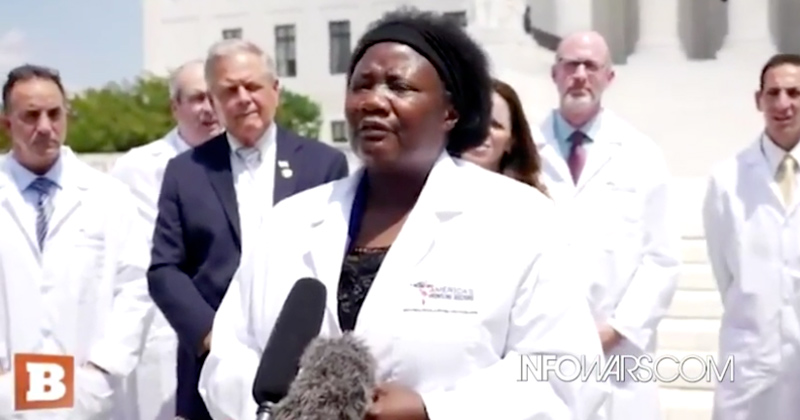 Dr. Stella Immanuel wants to be sure President Trump and First Lady Melania are taking hydroxychloroquine

Stella Immanuel, M.D., one of the front line medical professionals who spoke in favor of using hydroxychloroquine, zinc, and vitamins C and D to treat COVID-19, has offered to prescribe her preferred treatment regimen to President Donald Trump if the doctors treating the First Family refuse to prescribe it.

Immanuel, who in July told the American public that she has treated hundreds of COVID-19 patients with hydroxychloroquine and did not lose a single patient, took to Twitter to offer to aid the First Family after they were tested positive for COVID-19 on Thursday night.

“Everyone in the White House get on HCQ twice a month,” wrote Immanuel. “If your doctors will not prescribe it I will. I can see you via telehealth emergency licensed in DC.” She added, “POTUS, FLOTUS don’t wait to get sick.”

Everyone in the White House get on HCQ twice a month. With daily vit C, D, and zinc. If your doctors will not prescribe it I will. I can see you via telehealth emergency licensed in DC. Use https://t.co/jTDgb5Et5p and I will hook you guys up. POTUS, FLOTUS don’t wait to get sick.

Immanuel reacted angrily when she learned the news of the president’s diagnosis, suggesting that if he had continued using hydroxychloroquine as a prophylactic, he would not have tested positive for the disease.

“Whoever told the president to stop taking HCQ should be punched in the face,” Immanuel wrote. “This did not have to happen. I am so upset.”

“This is our president for crying out loud,” she added. “No one needs to get sick.”

Whoever told the president to stop taking HCQ should be punched in the face. This did not have to happened. I am so upset. This is our president for crying out loud. No one need to get sick or pcr positive. #HCQ4prevention

After Immanuel first went viral during her appearance at the America’s Frontline Doctor’s Summit, and was then criticized by the media and Democrats for her religious beliefs, President Trump defended her, saying he thought she was “very impressive.”

Another reporter asked the president specifically about Immanuel, noting controversial statements she made over the years at her religious ministry, Fire Power Ministries.

“I can tell you this: She was on air along with many other doctors, they were big fans of hydroxychloroquine, and I thought she was very impressive,” said President Trump, “In the sense that from where she came, I don’t know from which country she comes from, but she’s said that she’s had tremendous success with hundreds of different patients and I thought her voice was an important voice, but I know nothing about her.”

Immanuel also made headlines when she claimed that widespread use of hydroxychloroquine, a cheap Malaria drug invented during World War II, would stop COVID-19’s progress in 30 days or less.