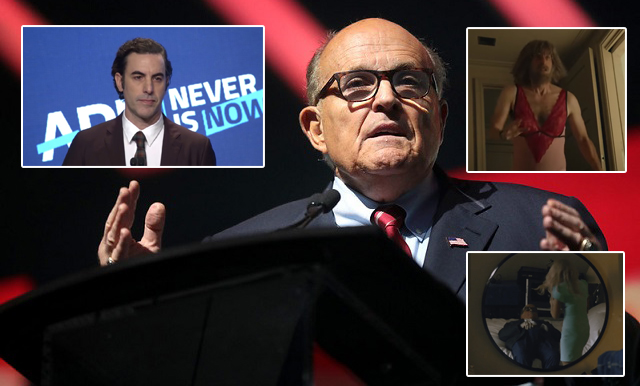 The video is a highly-edited, disjointed compilation of out-of-context clips which nonetheless appear perfectly innocuous and show 24-year-old actress Maria Bakalova initiated all contact with Giuliani, who was single at the time the scene took place.

There’s a giant cut when Cohen entered to room to allegedly shout: “Put down your crump, she’s 15, she’s too old for you!”

There’s no evidence Cohen actually even uttered those lines as none of it is captured on video.

“Put down your crump” is played while Giuliani is seen sitting up after tucking in his shirt that was previously untucked by Bakalova.

“She’s 15, she’s too old for you” is played while Cohen is allegedly barging into the room.

I slowed down the clip so everyone can clearly see Cohen is not even speaking.

“She’s 15, she’s too old for you” was dubbed in during post-production.

You can see in this clip from his film “Borat 2” that Cohen’s lips aren’t even moving when he’s supposed to be saying it. pic.twitter.com/gsfKsxGRxF

Cohen clearly dubbed that line in during post-production.

Cohen also appears to have dubbed in a fake “woah” sound at the 3:06 mark which viewers are supposed to believe was Giuliani reacting in shock at being busted. You can see in the mirror that Giuliani wasn’t shocked and doesn’t appear to have uttered a word. Bakalova also appeared to show no reaction.

Between 3:00 and 3:07, three different cameras are used. Cohen appears to have had his team cut between the three cameras to make the tucking appear to go on longer than it did to make it seem somehow untoward.