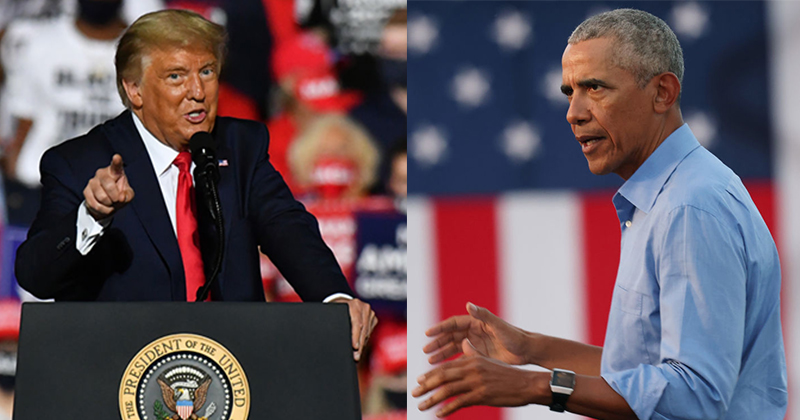 Trump slams Obama campaigning while Biden hides; “There was nobody that campaigned harder for Crooked Hillary Clinton than Obama”

President Trump tore into Barack Obama Wednesday as the previous incumbent of the White House campaigned in place of Joe Biden, who is nowhere to be seen since his son’s laptop scandal exploded last week.

Obama also attacked Trump on the coronavirus response, stating “We literally left this White House a pandemic playbook,” adding “They probably used it to, I don’t know, prop up a wobbly table somewhere.”

Trump hit back at Obama during a rally in North Carolina, telling the huge crowd “You know Obama’s now campaigning. Oh, here we go.”

Referring to him as ‘Barack Hussein Obama,’ Trump said his predecessor had “refused to support Biden,” up til now.

“There was nobody that campaigned harder for Crooked Hillary Clinton than Obama,” Trump added, noting “He was all over the place.”

“The only one more unhappy than Crooked Hillary that night was Barack Hussein Obama,” Trump boomed.