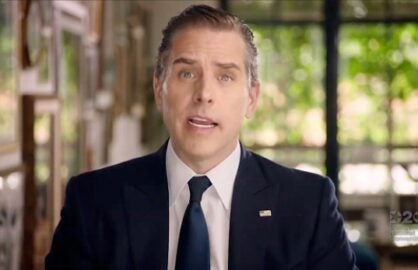 A few days ago, the MSM and their political allies in the Democratic Party celebrated the release of a “compromising” photo appearing to show former NYC Mayor Rudy Giuliani with his hands down his pants. Giuliani claimed that he was merely retucking in his shirt after removing some recording equipment, but nevertheless, the whole news cycle played out in full view of the public as social media giants like Twitter and Facebook looked the other way, allowing the photo, and links to news stories covering the controversy (orchestrated by “Borat” prankster Sasha Baron Cohen) to circulate widely.

However, just days later, a Chinese digital media company has published footage showing a man who looks identical to Hunter Biden engaging in a sex fetish act with an unidentifiable woman (along with a photo purporting to show what appears to be the same man engaging in sex with a Ukrainian prostitute). But instead of allowing discussion and links to the video to circulate, Twitter has scrubbed all links and photos related to the video and story, and is suspending accounts that appear to be trying to spread the video or screenshots from the footage.

In it, a naked Hunter Biden can be seen, smoking crack, and laying with an unidentified woman, possibly a prostitute. The woman’s face is blurred out, making it impossible to tell whether or not she appeared to be underage.

The video itself was posted by a news site purporting to be an anti-CCP intelligence operation called G-TV, which is also tied to Guo Wengui, the Chinese billionaire dissident who is close to Steve Bannon (Bannon was reportedly arrested after a visit on Guo’s yacht in Connecticut).

Footage of the sex act is preceded by footage of Guo Wengui at the national press club raging over a Chinese takeover of the US, “9/11 times a thousand,” he says, before transitioning to a screed slamming Western politicians who collaborate with the CCP, and warning about the dangers of American kleptocrats falling sway to CCP “influence” (blackmail etc).

During the opening minutes if the video, Hunter can be heard complimenting the woman on her technique. “That’s so professional,” Hunter exclaims. “You can’t even find that on there,” he laughs as he gestures toward something off camera.

A few minutes in, the man who is allegedly Hunter Biden can be seen firing up a crack pipe.

I just watched Hunter Biden get a foot job I think

Others focused on the statement at the beginning of the video, which also begins with footage of an unrelated event.

🔥This message is extremely important. Please read it. The sex tape is to prove the CCP’s BGY & their possessions of such content. Anything involving children can’t be released to public. They DO EXIST & have been verified by multiple reporters. #HunterBiden #BidenCrimeFamiily pic.twitter.com/TEcSif1L1v

Of course, now that actual pornographic footage of Hunter Biden has been produced, the world will stop and wonder: could these other rumors be true?