In a Breitbart London exclusive video, protesters were seen singing: “I would rather be a human than a slave”, “We are the 99 per cent”, and “You can shove your New World Order up your ass”. At around 4 pm the police in London began using tactics to split the protest into separate groups and made at least 18 arrests in Trafalgar Square and on Westminster Bridge. One woman told Breitbart London: “I’m so angry, all these police that are storming in, they’re going to lose their pensions. They’re supposed to be protecting us, they’re not, this is tyranny.”

Thousands of protesters descended on the British capital on Saturday to call for an end to coronavirus lockdowns and restrictions on businesses in the UK, which they described as a form of “tyranny”.

If you want to have riots calling for social justice and burn down whole city blocks, that seems to be allowed. If you want to have violent anti-Trump rallies, that seems to be allowed as well. But if you dare to hold a protest against the New World Order, the COVID lockdowns, or the massively lopsided system that punishes good and rewards evil, they come for you and force you to disperse. Truly the dystopian world envisioned by George Orwell in ‘1984’ is coming true to a degree that might even surprise Orwell.

“History has stopped. Nothing exists except an endless present in which the Party is always right.” – George Orwell in ‘1984’

People seem to be waking up and that’s a good thing, the global elites are indeed attempting in this crazy year of 2020 to bring in the New World Order, and they are using COVID lockdowns and a forced social justice agenda as the sledgehammer to accomplish the mission. But in order for these much-needed protests to be truly effective, governments all over the free world need to be brought to s standstill under our leaders begin to listen to the people. The people in London who protested are on the right track, but I fear it may wind up being too little, too late.

Watch: ‘Shove Your New World Order Up Your A**!’ — London Erupts in Protest Against Lockdown

FROM BREITBART NEWS: In a Breitbart London exclusive video, protesters were seen singing: “I would rather be a human than a slave”, “We are the 99 per cent”, and “You can shove your New World Order up your ass”.

The ‘Stop the New Normal’ march was organised by the anti-lockdown activist group Stand Up X and was one of the largest rallies against the government’s coronavirus restrictions since the beginning of the lockdowns in March. The large scale act of civil disobedience followed more restrictions being imposed on the people of Wales, Northern Ireland, and Scotland, as well as the introduction of a ‘tier system’ by Prime Minister Boris in England, in which local regions and cities are placed under lockdown if spikes in coronavirus cases are recorded. 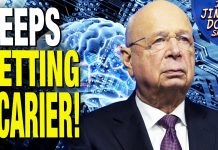