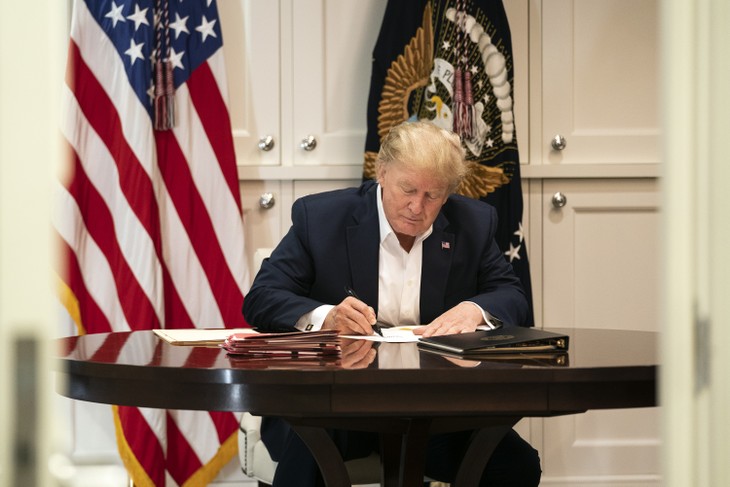 When the news broke that President Trump had contracted the coronavirus, many of his supporters immediately began to pray for his recovery, while many Democrats were thrilled. Some, including former Hillary Clinton staffer Zara Rahim, even expressed the hope that he would die. The sharply divergent reactions revealed yet again the growing divide in American society, as they demonstrate that the left and the right today are operating from two vastly different and irreconcilable worldviews.

Leftists celebrating Trump’s illness were many, and they made no effort to hide their sentiments. Chris Rock yukked it up on Saturday Night Live, saying: “President Trump is in the hospital from COVID and I just wanna say my heart goes out to COVID.” Film critic Simon Abrams tweeted: “For once, I’m rooting for the virus.” Daniel Golson, staff editor at Car and Driver, chimed in with “I don’t feel bad about hoping he dies because I’ve been hoping that since 2015.”

Many conservatives have been appalled at these reactions, and have pointed to them to illustrate how deranged the left has become in its hatred for the president. They’ve noted that the right reacted to the death of Justice Ruth Bader Ginsburg with condolences and expressions of regret, without regard for the fact that Ginsburg was the embodiment of a leftist activist judge with no interest in respecting constitutional restraints. Many have asked why leftists can’t react with similar charity when someone among the dissidents from their agenda falls ill, even their primary bête noire, President Trump.

The answer is in this as in so many other areas, the left and the right are working from premises that are more or less polar opposites. Jesus says “Love your enemies, and pray for those who persecute you” (Matthew 5:44). This has long been interpreted as meaning that one should treat everyone, even one’s political opponents, with respect, and have compassion for them when they suffer. This remained a cultural ideal long after many Americans began to discard their Christian faith and is still taken for granted among many people, albeit in the United States increasingly only among conservatives of all faiths.

That former Hillary staffer, Zara Rahim, in contrast, is a Muslim. The Qur’an doesn’t say that believers should love their enemies. Instead, it says “Muhammad is the apostle of Allah. Those who follow him are ruthless to unbelievers, merciful to one another” (48:29). What flows from this is that one should not have respect for one’s political foes, but rather, remain intent on destroying them.

Of course, most of the Leftists who have been cheering Trump’s coronavirus and passionately hoping (if not praying) for his death are not Muslim and never will be. But the leftist/Islamic alliance is manifest in numerous ways these days, including the fact that Zara Rahim is a top-level Democratic Party operative, and that Joe Biden has repeatedly engaged in the most shameless Islamopandering, and the power and influence of first-term Muslim Representatives Ilhan Omar (D-Mogadishu) and Rashida Tlaib (D-Gaza) among congressional leadership, and the collaboration of Black Lives Matter with Palestinian jihadis, and much more.

This is an alliance of convenience based upon a shared goal—the destruction of the United States of America as a free republic—but it is more as well. The secular Left agrees with the idea that one should be ruthless to one’s enemies and merciful only to one’s friends. Leftists share with Islamic supremacists the idea that one’s enemies should not be loved, or prayed for, but only treated ruthlessly and destroyed by any means possible.