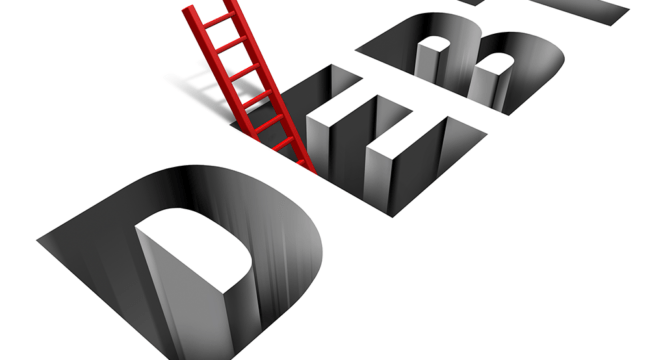 This year’s budget deficit is projected at $3.3 trillion, over three times last year’s estimate. The coronavirus is responsible, and the number should be an outlier. But annual deficits will be at the trillion dollar level for the foreseeable future.

I don’t say that to be hyperbolic. I’m not looking to scare people or attract attention to myself. It’s just an honest assessment, based on the numbers.

When is the debt-to-GDP ratio too high? When does a country reach the point that it either turns things around or ends up like Greece?

Economists Ken Rogoff and Carmen Reinhart carried out a long historical survey going back 800 years, looking at individual countries, or empires in some cases, that have gone broke or defaulted on their debt.

They put the danger zone at a debt-to-GDP ratio of 90%. Once it reaches 90%, they found, a turning point arrives…

At that point, a dollar of debt yields less than a dollar of output. Debt becomes an actual drag on growth. What is the current U.S. debt-to-GDP ratio?

About 130% (the reaction to the pandemic caused a spike. It was previously about 105%).

We are deep into the red zone, that is. And we’re not pulling out. The U.S. has a dangerous debt to GDP ratio, trillion-plus dollar deficits, more spending on the way.

We’re heading for a sovereign debt crisis. That’s not an opinion; it’s based on the numbers. How do we get out of it?

For elites, there is really only one way out at this point is, and that’s inflation.

And they’re right on one point. Tax cuts won’t do it, structural changes to the economy wouldn’t do it. Both would help if done properly, but the problem is simply far too large.

There’s only one solution left, inflation.

Most of the new money was given by the Fed to the banks, who turned around and parked it on deposit at the Fed to gain interest. The money never made it out into the economy, where it would produce inflation.

The bottom line is that not even money printing has worked to get inflation moving.

Is there anything left in the bag of tricks?

There is actually. The Fed could actually cause inflation in about 15 minutes if it used it. How?

The Fed can call a board meeting, vote on a new policy, walk outside and announce to the world that effective immediately, the price of gold is $5,000 per ounce.

They could make that new price stick by using the Treasury’s gold in Fort Knox and the major U.S. bank gold dealers to conduct “open market operations” in gold.

The Fed would target the gold price rather than interest rates.

The point is to cause a generalized increase in the price level. A rise in the price of gold from $1,900 per ounce to $5,000 per ounce is a massive devaluation of the dollar when measured in the quantity of gold that one dollar can buy.

There it is — massive inflation in 15 minutes: the time it takes to vote on the new policy. Don’t think this is possible? It’s happened in the U.S. twice in the past 80 years.

The first time was in 1933 when President Franklin Roosevelt ordered an increase in the gold price from $20.67 per ounce to $35.00 per ounce, nearly a 75% rise in the dollar price of gold.

He did this to break the deflation of the Great Depression, and it worked. The economy grew strongly from 1934-36.