This is the third in a series of articles focused on the outlook for major currencies. The first concluded that the US dollar is already on the path of monetary hyperinflation. The second concluded that the euro system is close to collapse as a consequence of a combination of the failure of commercial banks and the TARGET2 settlement system, likely to collapse the currency itself.

With its systemic exposure to the Eurozone, sterling is likely to be a casualty of the failure of the euro system and shares the monetary hyperinflation characteristics of the dollar. The Bank of England is copying US monetary policies and will find it increasingly difficult to prevent the pound from escaping the same fate as the dollar

• Adjusting out QE of £300bn since last March tells us that measured in 2019 pounds the UK economy contracted by 34% in 1H 2020, not the 9.3% headline figure. A further round of QE and government spending will be deployed in an attempt to support the private sector economy through a second covid wave, which will almost certainly be greater than the initial £300bn—£317bn so far.

• The Bank of England has now accepted that a second round of stimulus is required and is exploring the possibility of introducing negative interest rates. It has yet to factor in the deterioration in the outlook for global trade which will force it into further rounds of QE, irrespective of the path of the virus.

• Britain’s banks, themselves exceptionally highly leveraged on a market capitalisation to balance sheet assets basis, are heavily exposed to the Eurozone’s banking system, which as I showed in last week’s article is could collapse in the near future. Rescuing British banks will require the government to underwrite at least a further £5.3 trillion in balance sheet assets at a time of mounting bad debts in the economy.

• Since the Lehman crisis the banks have supported zombie businesses rather than face crippling write-offs. These zombies, epitomised by the desire of the industrial establishment to remain in the EU customs union rather than grasp the opportunities offered by free trade, are the principal beneficiaries of yet more government support. The moment that that support falters, Schumpeter’s creative destruction will hit the UK economy with a vengeance.

• The impending economic failure triggered by waves of covid will doubtless be incorrectly blamed on Brexit. Nevertheless, the government and the Bank are committed to ensuring the economy does not slump. This will lead to yet more monetary inflation, setting the UK’s pound on the same hyperinflationary course as that of the dollar.

There was a time when the British pound bestrode the world. More correctly, it was the gold standard behind it, the pound acting as a gold substitute between the end of the Napoleonic Wars and the outbreak of the First World War. Its sound money was extended throughout the British Empire through commerce. Admittedly, the government financed a series of small wars, but these were never to conquer territory — rather they were to subjugate rebellion, mainly from forces that wanted to substitute power for commerce. Today it would be called US-style peacekeeping, but modern historians with an anti-imperialist axe to grind call it colonial oppression.

But the fact is that Britain brought civilisation and improved living standards to many people whose technology had not even advanced to the wheel. Following the First World War, Britain then began its decline and fall with a succession of weak socialistic governments which could only hang onto America’s coat tails until throwing her lot in with the Common Market. It has been the longest and most notable decline from prosperity and global commercial dominance in modern times — longer even that the failure of Soviet communism. For Britain the hundred years from the Great War to date have seen the reversal of the fortunes of the previous hundred years.

It is not as if this is a trend fuelled by ignorance — we know from our past how to become wealthy and successful. Margaret Thatcher knew it, and so did Boris Johnson. But both were overwhelmed by the system, Boris considerably more rapidly than Margaret. Already half forgotten, Boris’s plans were decent: the reduction of state bureaucracy, the creation of free ports and the restoration of Britain as an entrepôt — an acknowledgement of low taxes, free markets, and the opportunities of Brexit. They were quickly overwhelmed by fear of covid-19. Fear that the state health service, full of wonderful, dedicated people working in a bureaucratic organisation would be unable to cope.

The bureaucrats did what they always do, prioritise the organisation above its purpose. The dysfunctional national health system was eulogised with rainbow paintings and a weekly clap-for-carers. But because there were not enough masks, the public was told they were ineffective, while the NHS took for itself what was available. The surge in hospital numbers was managed by the sick being billeted in private sector care homes, infecting and killing their residents.

In the full knowledge of the likely economic consequences of the mismanagement of the pandemic there has been no suggestion that the state should rein in its spending. One would have thought that when the people are forced to economise, the state should as well to reduce its burden on the people. But no; to save the state’s employment record, spending on supposedly important causes with the intention of preserving jobs has gone off the Richter scale.

Civil servants in the Treasury, which has been brought under the Prime Minister’s direct control, still dream of a balanced budget, achieved not by cutting government spending, but by raising taxes. But others see that raising taxes too early risks destroying what’s left of the tax base. Meanwhile, the list of supplicants with good causes and their hands out for more and more money from the state grows even longer. The government’s problem is that after a hundred years of increasing socialism it finds itself accelerating on the road to yet more socialism instead of turning the tide towards Boris’s libertarian ideals.

Attempts to steer the economy back towards free markets and sound government finances were always going to be difficult. Boris is no de Gaulle, prepared to place national liberty and culture above foreign relations. Nor is he in a strong enough position to emulate Ludwig Erhard, who was empowered to ditch the status quo with a clear vision of the future. It is not necessarily Boris’s fault; it is the political reality.

If nothing else, covid has exposed Boris as relying on his advisors instead of ploughing his own furrow. It has exposed the British public’s wishful belief that a magic money tree exists ready to be defoliated, and that any government which doesn’t make full use of it is being monstrously unfair.

Covid is a crisis which has exposed the inadequacies of state planning. But the unsavoury fact is that given the scientific advice, from the political point of view the government had little alternative to locking down the entire nation on 23 March. Now that Europe and the UK are entering a second wave of the virus, all thoughts of a rapid return to normality have been debunked. The V-shaped recovery upon which financial and economic predictions were predicated has gone out of the window, and the establishment is only just realising it.

For the establishment there is the added pain of Brexit, where Britain can no longer hang onto its European nurse, for fear of something worse. As the habitual robber of its electorate’s freedom, the British establishment itself cannot easily come to terms with the prospect of its own freedom from Europe.

Brexit has already happened and the transition period, during which trade and other arrangements were meant to be finalised, ends on 31 December, so far without agreement. But at long last, the EU’s negotiating team realises that Britain means business over the remaining issues, principally fishing and sovereignty. From the British point of view, an understanding of proper economics tells us she should grasp the free market option, refuse to accept any trade deal and withhold any funds agreed as part of the withdrawal settlement. But the Westminster and Whitehall establishments, wooed by and in the pocket of vested interests, is wholly unable to embrace the sensibility of that outcome.

Whether it ends up with a trade deal or WTO terms is less relevant than the fact that with the exception of some cabinet ministers, Whitehall (civil service) and Westminster (politicians) establishments are solid Remainers — terrified of the economic consequences of Brexit. They are in the company of industry lobbyists, with their established European links and reluctance to explore new trade opportunities elsewhere. Any descent into a business slump will almost certainly be wrongly blamed on Brexit, ignoring the inadequacies of British business and the need for its fundamental reform — a need that can only be satisfied by allowing zombie businesses, mainly tied to European protectionism, to go to the wall and for capital of all forms to be freed and redirected towards profitable use.

Whatever the outcome of Brexit, the ties with the EU will not suddenly cease. In the event of a financial and systemic failure, extra financial obligations will arise, and there are considerable counterparty risks between European and British banks. See here for my recent analysis of the Eurozone’s banking and monetary system. The likelihood of a Eurozone banking collapse is now a virtual certainty and could transpire any moment. Figure 1 shows the scale of the collapse in their share prices. And as measured by the STOXX Index Europe 600 banks, the sector is on the verge of setting new lows. 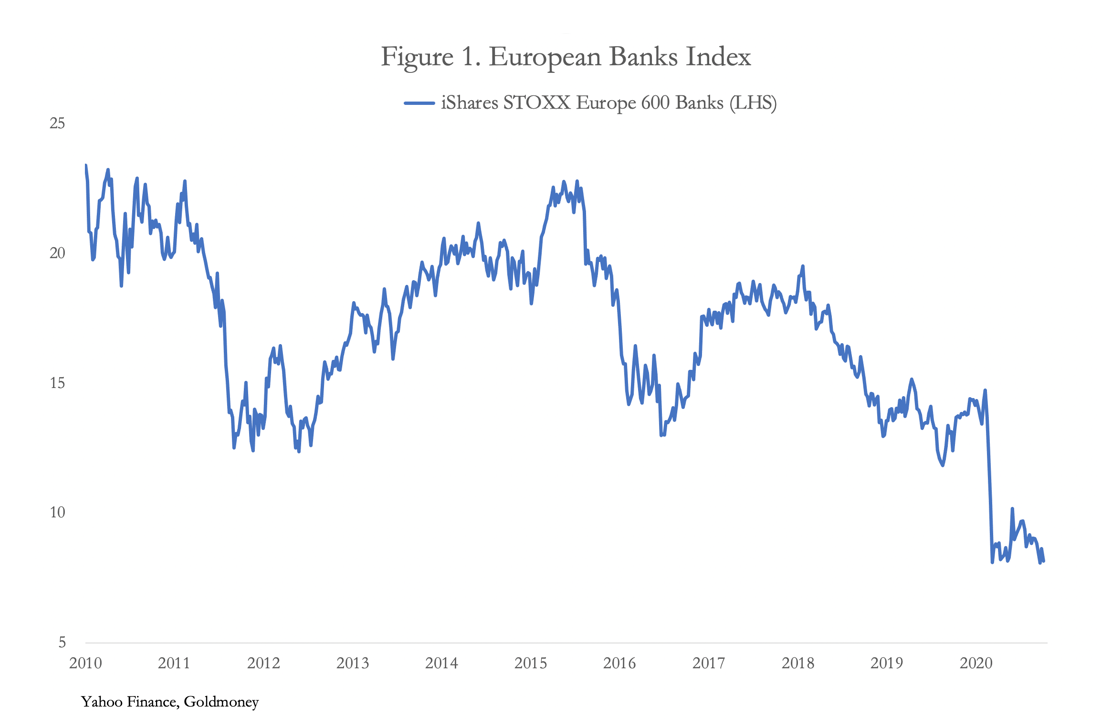 The STOXX Europe 600 banks includes Eurozone, British and other European banks. Over this calendar year, the index has fallen by 43% at a time when equities recovered strongly following the FOMC’s announcement of unlimited QE on 23 March 2020.

The severe actual and relative weaknesses in Eurozone banks come at a time of similar weakness in the British banks, and a banking failure in the Eurozone or elsewhere would collapse British banks like so many dominoes. The Treasury and Bank of England will then be forced to underwrite their banking systems with unlimited credit, supporting balance sheets amounting to more than £5.5 trillion — over twice UK GDP. Furthermore, the fig-leaf concealing monetary inflation through QE would be blown away, exposing the ghastly reality of government finances.