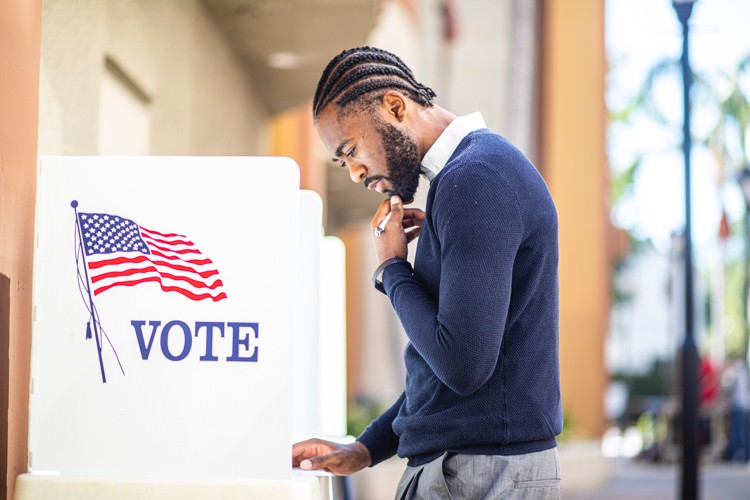 It has been called the “Rainbow Coalition,” and Democrats rely on it to win elections. One of its bulwarks has long been the black vote, of which Democrats often capture 90-plus percent. But this may change this election cycle if a recent Rasmussen poll is any guide, one showing that President Trump’s job approval has soared to a whopping 46 percent among black voters.

Oh, it’s not that black Americans voting Republican is unprecedented; it’s just unprecedented since the waning days of flapper fashion. And while no one believes Trump will capture the black vote the way Herbert Hoover did in 1932, even winning 20 percent of it likely would spell doom for Democratic presidential nominee Joe Biden.

The Rasmussen poll hints at just such an outcome, showing that, oddly, black support for Trump rose from 25 percent last Monday to 46 percent on Friday (tweet below). The latter was relatively close to the president’s overall approval rating, which Rasmussen had at 51 percent on Friday.

That polls have, actually, for a long time been showing rising black support is why the Washington Examiner asked last year if 2020 will “be 1936 in reverse.” The site was referencing how, while Franklin Delano Roosevelt apparently lost the black vote by more than a three-to-one margin in 1932, he carried 76 percent of it in 1936.

The GOP’s earlier dominance among blacks was unsurprising. The Republicans were the party of Lincoln and emancipation and the Democrats the party of slavery. Yet the realignment that began under FDR concluded under Lyndon Johnson (with his “Great Society” programs), who infamously was reported to have said, “I’ll have those n****rs voting Democratic for the next 200 years.”

Since then, Republicans have typically captured 10 percent or less of the black vote. Despite having been a popular celebrity among blacks, even Trump won only eight percent in 2016.

But Johnson’s prediction may prove overly optimistic. While not all polls accord with Rasmussen — Gallup put Trump’s black support at 11 percent this summer — other polls have placed that number in the 30s.

Historically, however, Rasmussen has been one of the more reliable polling outfits. As for its methodology, the organization reports that daily “tracking results are collected via telephone surveys of 500 likely voters per night and reported on a three-day rolling average basis.”

“The margin of sampling error for the full sample of 1,500 Likely Voters is +/- 2.5 percentage points with a 95% level of confidence,” Rasmussen also explains.

Yet even if Republicans win just a third of the black support Rasmussen finds, it could be goodnight Joe. As WND.com has reported, the Democrats have captured an average of 91 percent of the black vote during the last five elections — and need that support to win.

Moreover, a September Rasmussen poll found that Trump had 27 percent of the black vote in crucial swing state Pennsylvania (which may help explain why Democrats appear to be ramping up their vote-fraud efforts there).

Such findings reflect what has been dubbed the “Blexit” (black exit) movement, which is well represented among prominent black people. Performer Kanye West has at times expressed support for Trump; rapper Ice Cube (O’Shea Jackson) has worked with the president, while rapper 50 Cent (Curtis Jackson) recently “endorsed” him before issuing a pressure-induced retraction.

Perhaps more significantly, black commentator Candace Owens has become a prominent conservative voice and Trump supporter. And, shockingly, she has been joined by civil-rights attorney Leo Terrell, once a staunch Trump critic and fire-breathing liberal but now an ardent fan of the president.

“I brought over 300,000 black Democrats to vote for Trump,” he said on the August 31 edition of Sean Hannity’s Fox News show. “I’m bringing more and more and more.”

“Trump is going to get the highest number of black votes ever in modern-day history for a Republican,” Terrell added. “Black voters are voting for Trump” (video below. Relevant portion begins at 2:54).

Even black CNN commentator Van Jones — Barack Obama’s “Green Czar” and self-proclaimed “communist” — recently admitted that Trump “does not get enough credit” for “good stuff he has done for the black community.”

Jones was referring to how the president has provided funding for historically black colleges and universities (HBCUs), has created “opportunity zones,” and signed “into law the bipartisan criminal justice reform FIRST STEP Act in 2018, which aims to reduce prison populations and rehabilitate convicted felons,” as WND.com puts it. Moreover, prior to the China virus situation, black unemployment had under Trump reached levels unprecedentedly low for modern times.

Unfortunately, though, this GOP tactic for wooing black voters comes at a price. Unmentioned by virtually all conservatives is that to a degree the Republicans are just competing with the Democrats in peddling handouts. Furthermore, like most all colleges and universities, HBCUs are left-wing propaganda mills teaching hatred of America. It’s “higher education,” not the police, that should be defunded.