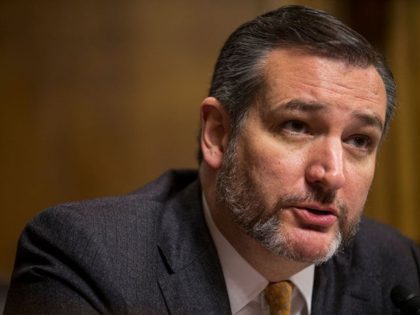 Sen. Ted Cruz (R-TX) tore into Twitter CEO Jack Dorsey today over his platform’s censorship of the New York Post’s story about the Biden family’s alleged corruption, accusing him of behaving like a “Democratic super-PAC, silencing views to the contrary of your political beliefs.”

Dorsey appeared before Senate Commerce Committee alongside Google CEO Sundar Pichai and Facebook CEO Mark Zuckerberg, for a hearing on Section 230 of the Communications Decency Act, the law that allows big tech platforms to censor users with limited legal repercussions.

After briefly addressing the other two CEOs, including a shot at Google over its “willingness to manipulate search outcomes to influence and change election results,” Sen. Cruz shifted focus to Dorsey.

“Of the three players before us, I think Twitter’s conduct has, by far, been the most egregious,” said Cruz.

In a tense exchange with the Senator, Dorsey denied Twitter’s ability to influence elections:

CRUZ: “Mr Dorsey, does Twitter have the ability to influence elections”

CRUZ: “You don’t believe Twitter has any ability to influence elections?”

DORSEY: “No. We are one part of an [inaudible] spectrum of communication channels that people have.”

DORSEY: “People have choice, of other communications channels, which –”

CRUZ: “Not if they don’t hear information. If you don’t think you have the power to influence elections, why do you block anything?”

DORSEY: “We have policies that are focused on making sure that more voices on the platform are possible. We see a lot of abuse and harassment that ends up silencing people and having them leave from the platform.”

CRUZ: “I find your opening answers absurd on their face.”

Cruz then went on to talk about Twitter’s censorship of the New York Post.

“Two weeks ago, Twitter and to a lesser extent Facebook, crossed a threshold which is fundamental in our country,” said Cruz. “Two weeks ago, Twitter made the unilateral decision to censor the New York Post, a series of two blockbuster articles, both alleging evidence of corruption against Joe Biden, the first concerning Ukraine, the second concerning Communist China.”

Dorsey responded by referencing Twitter’s “hacked materials” policy, introduced in 2018. However, Dorsey admitted that Twitter didn’t know that the materials in the Post’s story were hacked, merely that it was “unclear.”

“So in your view, if it’s unclear the source of a document – and in this instance, the New York Post documented what it said the source was – it said it was a laptop owned by Hunter Biden that had been turned in to a repair store. So they weren’t hiding what they claimed to be the source. Is it your position that Twitter, when you can’t tell the source, blocks press stories?”

Dorsey quickly responded that his team made a “fast decision” and that the policy of blocking links to the story was “incorrect” and has now been changed.

“Yes, they have to log into their account … delete the original tweet, which fell under our original enforcement actions, and they can tweet the exact same material, the exact same article, and it would go through.”

The answer did not satisfy Cruz, who went on to highlight Twitter’s failure to enforce the same policy against the New York Times.

“Let me ask you something. You claim it was because of a ‘hacked materials’ policy … Did Twitter block the distribution of the New York Times’ story a few weeks ago that purported to be based on copies of President Trump’s tax returns.”

DORSEY: “We didn’t find that a violation of our terms of service and this policy, because it was reporting about the material, not distributing the material.”

CRUZ: “That’s actually not true. They posted what they purported to be original source materials, and federal law, federal statute makes it a crime, a federal felony, to distribute someone’s tax returns against their knowledge, so that material was based on something that was distributed in violation of federal law, and yet Twitter gleefully allowed people to circulate that. But when the article was critical of Joe Biden, Twitter engaged in rampant censorship and silencing.”

DORSEY: “And, again, we recognize errors in that policy. We changed it within 24 hours.”

CRUZ: “But you’re still blocking the New York Post. You haven’t changed it.”