Total retail sales – sales of goods in stores and online, but not including services such as doctor’s visits, insurance, airline tickets, hotel bookings, rent, etc. – in September jumped by 1.9% from August, to a record of $549 billion (seasonally adjusted), according to the Census Bureau. Compared to September 2019, retail sales were up 5.4%.

But as we’ll see in a moment, there were huge differences between categories, from sales at clothing stores and restaurants which, though they bounced a lot, were still below where they’d been years ago; to sales at stores for building materials and garden supplies, which jumped from record to record during the crisis:

The stimulus money & things consumers no longer pay for.

There were a lot of things consumers didn’t do, such as flying – passenger traffic in the US was down 65% from a year ago – staying at hotels, going to the movies, and the like. And the money not-spent on these services got spent on other stuff. About 7% of households with a home mortgage got their mortgage moved into forbearance, and they no longer have to make mortgage payments for the forbearance period, and that money of those not-made mortgage payments got spent elsewhere. And some renters, protected by eviction bans, have stopped making rental payments and spent the money on other stuff.

Then there were the stimulus payments, starting in April, some of which are still going out to people the IRS had trouble locating. And the extra $600 a week in unemployment benefits, and the federal program for gig workers (PUA) that states had trouble processing, were sent out often way behind and in lump-sums.

The extra $600 a week was replaced in August by the extra $300 a week, which states started sending out in late August and September, also in lump-sums. In California, the first lump-sum payments of $900, covering three weeks, were sent out in early September, and more was sent later in September. After six weeks of payments in California, the federal funds have been exhausted, and those final payments are now going out, according to the California Employment Development Division.

Then there were all the folks that fraudulently obtained unemployment coverage, under one or several programs, and that money too got spent.

But not all these funds got spent. Some of them went to paying down credit-card debts, including the biggest plunge on record in April when the stimulus checks arrived. By the end of August, credit card balances had dropped 7% from March. Consumers who’d used their stimulus money to pay down credit cards have some room to spend more later. The paydown of credit cards essentially came to a halt in June, July, and August with the slowdown of the stimulus and extra unemployment money:

Sales at new & used auto dealers and parts stores jumped 3.6% in September from August, to $115 billion (seasonally adjusted), and was up 8.2% from September last year.

This was powered by historic price spikes of used vehicles of 6.7% in September from August, and of 15.1% over the past three months. But used vehicle retail volume, measured in the number of vehicles sold, in September was still below last year. People bought fewer used vehicles but paid more for them.

The average transaction price of new vehicles has also risen, under the dual impact of consumers buying higher-priced vehicles, particularly high-end trucks, and price increases of new vehicles. Total new vehicle sales, including fleet sales, in September were still down about 4.3% from a year ago. But retail sales were stronger year-over-year. 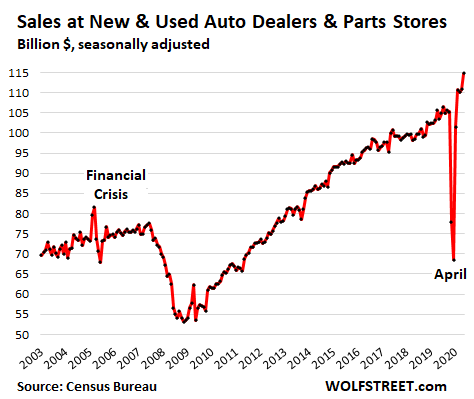 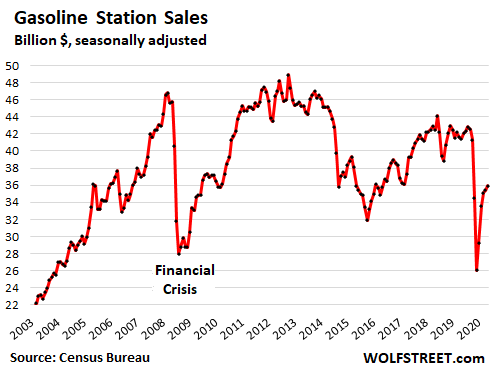 Sales at ecommerce sites and other “Non-Store Retailers” (mail-order operations, stalls, vending machines, etc.) edged up 0.5% from August, to $83.8 billion, the second highest ever, and up by 23.8% from September last year, after the huge spike during the lockdown. Despite speculations that ecommerce sales would drop sharply after brick-and-mortar stores reopened, this is not what happened: 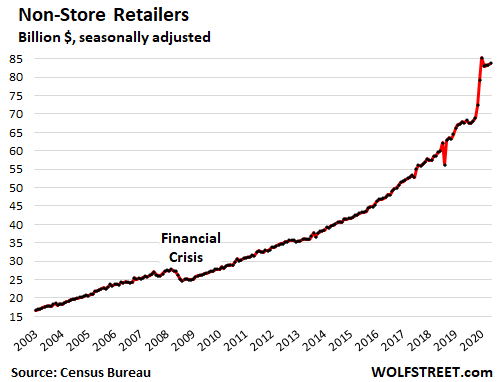 Sales at Food and Beverage Stores were flat in September compared to August, at $70.8 billion, but were still up 10.5% from a year ago, as work-at-home and study-at-home consumers are still buying for the home what they used to consume at work or at school, with spending shifting from commercial suppliers to retail channels. Nevertheless, a good part of the March spike has now been unwound: