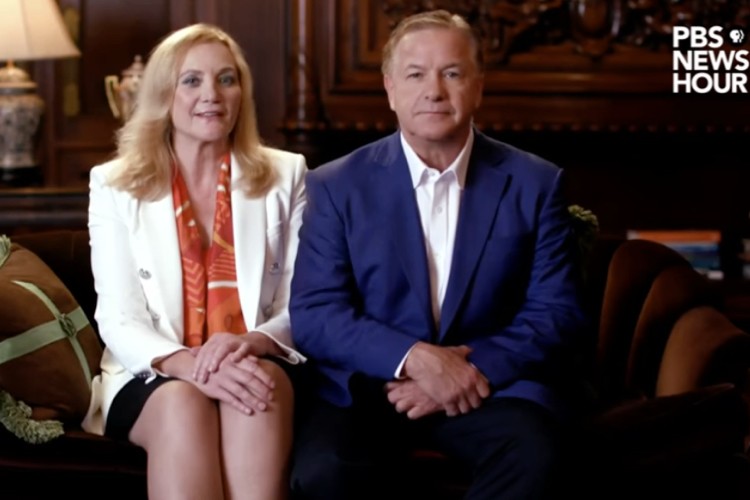 Mark and Patricia McCloskey, the St. Louis couple seen brandishing firearms in the face of a crowd of Black Lives Matter activists they said threatened them, pleaded not guilty to two felony charges at a brief hearing on Wednesday.

The McCloskeys, who are both attorneys in their early sixties, were indicted by a St. Louis grand jury last week on charges of unlawful use of a weapon and tampering with evidence. They have another court appearance set for October 28.

St. Louis Circuit Attorney Kim Gardner originally filed the weapons charge in July and the grand jury later added the evidence tampering charge. According to the indictment, a semiautomatic pistol was altered in a way that “obstructed the prosecution of Patricia McCloskey” on the weapons charge.

The husband and wife duo have achieved nationwide popularity among conservatives who praise them for standing their ground amid what the McCloskeys say were death threats from the left-wing mob, which had broken into the couple’s private community by breaking through a gate.

President Donald Trump has shown support for the McCloskeys, and the duo even spoke on video during the opening night of the Republican National Convention.

The McCloskeys’ attorney, Joel Schwartz, indicated that Trump remains interested in the case. “They have spoken with the president,” Schwartz said after the hearing. “The president contacts them semi-frequently.”

Missouri Governor Mike Parson has also defended the couple’s right to protect their home and said he will pardon them if they are convicted.

As the Associated Press notes:

Mark McCloskey, after a brief court hearing last week, expressed anger that he and his wife faced criminal charges while those who trespassed on his property did not.

“Every single human being that was in front of my house was a criminal trespasser,” McCloskey said. “They broke down our gate. They trespassed on our property. Not a single one of those people is now charged with anything. We’re charged with felonies that could cost us four years of our lives and our law licenses.”

It’s also worth noting that Gardner’s reelection campaign got a boost from George Soros.

Soros, a Hungarian-born investor who funds socialism across the world, has poured large sums into electing other liberal prosecutors around the country. Earlier this year, he sent funds into Chicago to back state attorney Kim Foxx, who gained national attention after her office dropped charges against Jussie Smollett, the actor who faked a hate crime that he blamed on Trump supporters. Soros has spent millions more helping far-left candidates in California, Florida, Pennsylvania, Texas, Virginia, and more.

Schwartz called the charges a “travesty” and a “political prosecution,” citing as evidence Gardner’s ads in her August primary campaign in which she referenced the case.

Schwartz stated he will ask for Gardner to be disqualified from the case so that another prosecutor can take over the case.

Gardner recently said of the McCloskey case: “As in all cases prosecuted by the Circuit Attorney Office, we seek justice on behalf of the people of the city of St. Louis that ensures fairness while protecting the due process rights of the accused.”

Of course, Democrats and the mainstream media made up their minds from day one that the McCloskeys are guilty and were the ones threatening innocent, “peaceful protesters.” One of the greatest curiosities of the tumult that has occurred since the death of George Floyd is the way in which the media can, with such a straight face, continue to parrot the “peaceful protesters” talking point even while the “protesters” (who are not protesters, but vandals, rioters, and even murderers) burn, loot, trespass, and assault.