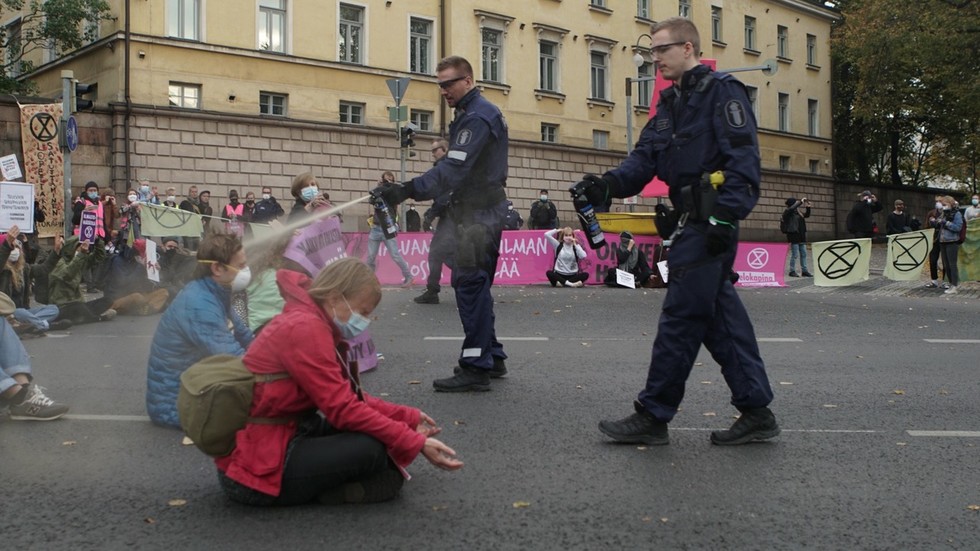 A sit-in protest was organized by Elokapina (Extinction Rebellion Finland) on the busy Kaisaniemenkatu road in Helsinki, where numerous road traffic and tram line routes converge, on Saturday.

The climate protesters were ordered to disperse, having blocked the busy road with their sit-down demonstration all afternoon before police finally, and seemingly without provocation, unloaded with pepper spray canisters, hitting the seated protesters directly in the face as photos and videos from the scene purport to show.

“Within 10 minutes of the protest spreading out, police resorted to pepper spray and sprayed protesters several times, causing severe reactions in roughly a dozen people. Police also prevented some of the sprayed people from rinsing their face with water,” reads a press release from Elokapina.

Activists took to Twitter to share what they experienced at the hands of the police and to express their outrage at what unfolded. Many blasted the actions of the officers and called for them to face disciplinary action. “Shame on you Finland! How dare you!” one irate commenter wrote.

Today, as we were peacefully protesting for climate action, we got pepper-sprayed at point-blank range. We are a nonviolent movement and today’s experience of police violence only strengthens my conviction: we are doing the right thing. They are not. #elokapina #XR #syyskapina pic.twitter.com/dttRBZrT5V

At least 51 protesters, some of whom had locked themselves to a boat, were detained by police according to an Extinction Rebellion press release.

In a statement, the Helsinki police department argued that given the extent of the traffic disruption and length for which the protest had been allowed to continue – roughly five hours – officers used the “most lenient forcible measure at [their disposal].”