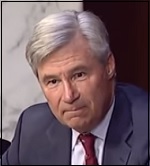 You could hear a lot of throat clearing from the live mic at the table where Supreme Court nominee Amy Coney Barrett sat yesterday as Senator Sheldon Whitehouse (D-RI) brilliantly exposed the tentacles of the corporate and fossil fuels money that was attempting to ram her onto the U.S. Supreme Court. (See the full video of the presentation by Whitehouse below.) As a former U.S. Attorney for the Justice Department and former Attorney General of Rhode Island, Whitehouse knows corruption when he sees it.

The Whitehouse tutorial was a summation of a 29-page treatise by Whitehouse that appeared earlier this year in the Harvard Law School Journal on Legislation. That article provides an in-depth look at how dark money has plied its corporate agenda to steal representative government from the American people.

If you are searching for answers as to how America arrived at this perilous moment in time and how to change the future course for our nation, we strongly encourage you to watch the video below, then read the full article by Whitehouse.

In Whitehouse’s presentation yesterday, he called out the Judicial Crisis Network, saying it had received two anonymous $17 million donations to put right wing justices on the U.S. Supreme Court. Noting that the funds could have come from the same individual, Whitehouse said: “Someone spent $35 million to influence the makeup of the U.S. Supreme Court – tell me that’s good.”

When Whitehouse had filed an Amicus brief in a case involving the right wing’s attack on the Consumer Financial Protection Bureau (CFPB), he noticed that a “flotilla” of right-wing groups filed Amicus briefs urging the court to take the right-wing’s position. He said that Donors Trust had provided $23 million to the groups that wrote the briefs in the CFPB case.

Whitehouse then put up another slide showing that the Federalist Society, the nonprofit that is providing the names of pre-approved nominees to the Supreme Court to the Trump administration, is receiving millions of dollars from the very same dark money conduits that are then funding the Amicus-writing groups.

When the Washington Post tallied up all of the dark money involved in remaking the nation’s federal courts, it came to a $250 million operation.

Whitehouse also revealed that there had been 80 cases at the Supreme Court where a wealthy Republican donor had been involved that had all been decided in the right-wing’s favor in 5-4 decisions. The cases fell into four categories: allowing unlimited dark money in politics; knocking down civil jury trials; weakening regulatory agencies; and, finally, passing voter suppression laws and bulk gerrymandering, where congressional districts are redrawn so that the bulk of the districts become Republican majority districts.

Whitehouse said that he’s convinced that a lot of this dark money is “polluter” money coming from fossil fuels companies. He specifically cited Koch Industries as one of these dark money funders.

Wall Street On Parade can go one step further than Whitehouse. Not only is Koch Industries involved but its Chairman and CEO, Charles Koch, has his fingerprints all over Donors Trust and Donors Capital Fund.  We exposed that reality in 2010 when we investigated the $17 million that funded a race-baiting film circulated through major newspapers and direct mail in the weeks before the 2008 presidential election when the first Black candidate in history, Barack Obama, was the Democratic nominee. We wrote this in the 2010 article:

“There are shades of Charles Koch all over Donors Capital and Donors Trust. Two grantees receiving repeat and sizeable grants from Donors Capital are favorites of the Koch foundations: George Mason University Foundation and Institute for Humane Studies. Another tie is Claire Kittle. A project of Donor’s Trust is Talent Market.org, a headhunter for staffing nonprofits with the ‘right’ people. Ms. Kittle serves as Talent Market’s Executive Director and was the former Program Officer for Leadership and Talent Development at the Charles G. Koch Charitable Foundation. Then there is Whitney Ball, President of both Donors Capital Fund and Donors Trust. Ms. Ball was one of the elite guests at the invitation-only secret Aspen bash thrown by Charles Koch in June of this year, as reported by ThinkProgress.org. Also on the guest list for the Koch bash was Stephen Moore, a member of the Editorial Board at the Wall Street Journal. Mr. Moore is a Director at Donors Capital Fund. Rounding out the ties that bind is Lauren Vander Heyden, who serves as Client Services Coordinator at Donors Trust. Ms. Vander Heyden previously worked as grants coordinator and policy analyst at the Charles G. Koch Charitable Foundation.

“Legal counsel for the Kochs has declined to respond to two emails with a week’s lead time seeking clarification of the relationship the Kochs have to Donors Capital and Donors Trust.”

For exactly what Charles Koch has achieved for his money, see the related articles below. 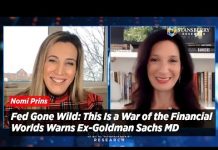