In the last four months America has experienced violence and upheaval not seen since the Civil War. Widespread rioting and burning cities have been the order of the day. We have witnessed anarchy and destruction on an unprecedented scale. Our nation has been vilified and accused of being irredeemably racist. Ritual kneelings took place on all levels: from people in the streets to politicians in the highest echelons of our government. We have seen shameless pandering and the political class bitterly divided. We watched law enforcement standing by while the rioters looted and burned with impunity.

These events have caught most of us by surprise. Especially startling has been the speed with which these developments have unfolded. A mere few months ago, we were an apparently well off and stable country. Today our nation seems to be falling apart at the seams and slouching toward a civil war. In February of this year, Gallup released a poll which showed that Americans’ confidence in the U.S. economy was at a 20-year high. At that time nearly ninety percent of Americans were happy with the course of their personal lives. Barely eight months later, we are a country on the verge of anarchy and lawlessness. How could it happen? Why did it happen? Most people just cannot make sense of this.

There is, however, a definite reason and explanation for the upheaval and disturbance in America today: what we are witnessing is a revolution in progress.

This may come as a surprise, but it is true nevertheless. The forces that are attempting to carry out this revolution are, in fact, quite explicit about it. Those marching in the streets routinely chant revolutionary slogans and carry placards featuring the word “REVOLUTION.” To make their purpose unmistakably clear, they regularly deface buildings with graffiti of sickle and hammer and other revolutionary symbols.

Below is a first-hand account of an event which took place as part of the so-called anti-racism “protests” in June of this year in New York City:

“With masses cheering the several calls for communist revolution, we marched down one of Brooklyn’s busiest streets, Flatbush Avenue. Bus drivers blared their horns and raised their fists as we chanted the names of Black youth murdered by the racist police, while marching past graffitied and smashed-up NYPD police cars.”

This unfolding revolution has been launched by the Hard Left and its goal is to topple our society and replace it with an altogether different system of governance.

The underlying ideology that informs the thinking and actions of the revolutionaries is Marxism and its derivatives and modalities such critical race theory, Cultural Marxism, liberation theology and the like. The revolutionaries call themselves by different names such as Marxists, communists, socialists, progressives, liberals, Democrats and such. (Not all who describe themselves as Democrats and liberals are Marxists, but some are.)

At this time the revolution is being spearheaded by the organization known as Black Lives Matter (BLM). BLM is frank about its agenda and ultimate goal. The headline video on its website is called “Now, We Transform.” The teaser underneath reads:

“Our fight for liberty, justice, and freedom continues. Together, we can — and will — transform. This is the revolution.”

When these people call for a revolution, they do not mean some kind of partial change or reform. What they want is a complete remaking and transformation of the American system. 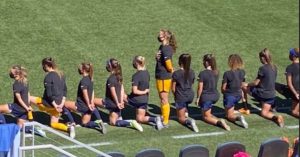 The founders of BLM are trained and committed Marxists. The New York Post reported this summer:

“Black Lives Matter co-founder Patrisse Cullors said in a newly surfaced video from 2015 that she and her fellow organizers are “trained Marxists” – making clear their movement’s ideological foundation, according to a report. Cullors, 36, was the protégé of Eric Mann, former agitator of the Weather Underground domestic terror organization, and spent years absorbing the Marxist-Leninist ideology that shaped her worldview.”

Patrisse Cullors and other leaders of Black Lives Matter make no secret of their desire to overthrow American society. They may be closer to their goal than most people can imagine.

The BLM inspired terror and upheaval of the past four months has followed the pattern of Marxist revolution that has unfolded dozens of times in the past 100 years.

It features the following components:

The revolutionary movement has achieved a significant measure of success on all of these fronts, making our society ripe for being overthrown and taken over by the Marxist insurgents.

This revolutionary movement did not begin with the riots that erupted on May 26, 2020 in Minneapolis and spread like a wildfire across the United States. The groundwork had been laid decades before. Its roots can be traced to the 1960s, and its precursors go even further back.