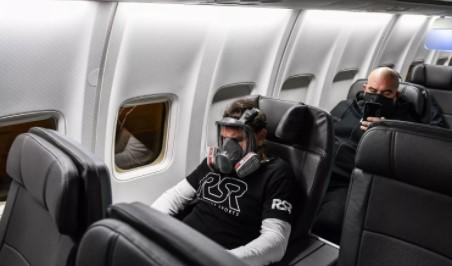 As air traffic once again heads back toward normal levels, airlines are seeing more and more travelers unwilling to succumb to their rules about wearing masks.

For example, there was this incident we documented weeks ago, wherein a black Trump supporter was removed from a flight for pulling down his mask to eat some peanuts.

And, there have been a steady number of similar cases on airlines, according to a new report from the WSJ. Nearly 1,500 people have been banned across 6 different airlines for violating facemask requirements, according to the report. Flight attendants have said that incidents have increased as the President has “belittled mask-wearing”.

The CDC reminded travelers at the beginning of this week that it “strongly recommends” masks or face coverings on flights.

Airlines had previously made exceptions for those with medical reasons, but they had to roll back that concession after it became an outlet for widespread non-compliance. Now the Transportation Department argues that airlines may have “gone too far” for people with disabilities.

After changes were put in place in July, only Delta will still allow medical exemptions – after a one hour virtual consultation with a Delta agent so you can explain your medical issue. The Transportation Department says it has gotten complaints from passengers who said they had disabilities and were denied boarding for not wearing a mask.

The airlines don’t however, have the option of banning eating or drinking during flights; and this is where many anti-maskers find their “exception” while on the plane. Some will sip a coffee “for an hour or more”, the Journal notes, just so they don’t have to put their mask back on.

The Association of Flight Attendants was pushing for an emergency federal rule that requires the masks, which means non-compliance could result in conviction and fines. Passenger group FlyersRights.org argued the government was creating “nationwide confusion among the public”.

The Transportation Department denied these requests, stating: “The Department also embraces the notion that there should be no more regulations than necessary.”

Sara Nelson of the flight attendants’ union AFA, argued against airlines enforcing the policy: “It’s not the same as having a federal mandate with consequences and fines.”

She continued: “This is putting not only our lives but also our jobs at risk. It’s incredibly frustrating. People are starting to understand it can be safe to travel. But people do not buy airplane tickets if there’s a question on safety.”

Airlines say they will continue to enforce the mask rule since it is recommended by the CDC. Meghan Ludtke, managing director of regulatory affairs at American Airlines, said: “It is a critical and obvious and important step that is not being disputed across the medical literature. This is a thing that works. We need to keep our team members and passengers safe, and this is a simple thing you can do to make it so.”