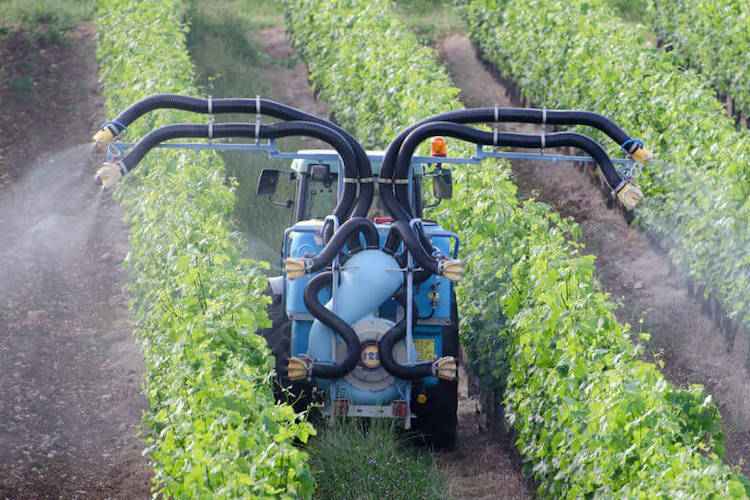 Chlorpyrifos insecticides were introduced by Dow Chemical in 1965 and have been used widely in agricultural settings. Commonly known as the active ingredient in the brand names Dursban and Lorsban, chlorpyrifos is an organophosphate insecticide, acaricide and miticide used primarily to control foliage and soil-borne insect pests on a variety of food and feed crops. Products come in liquid form as well as granules, powders and water-soluble packets, and may be applied by either ground or aerial equipment.

Chlorpyrifos is used on a wide variety of crops including apples, oranges, strawberries, corn, wheat, citrus and other foods families and their children eat daily. USDA’s Pesticide Data Program found chlorpyrifos residue on citrus and melons even after being washed and peeled. By volume, chlorpyrifos is most used on corn and soybeans, with over a million pounds applied annually to each crop. The chemical is not allowed on organic crops.

The American Academy of Pediatrics, which represents more than 66,000 pediatricians and pediatric surgeons, has warned that continued use of chlorpyrifos puts developing fetuses, infants, children and pregnant women at great risk.

Scientists have found that prenatal exposures to chlorpyrifos are associated with lower birth weight, reduced IQ, the loss of working memory, attention disorders and delayed motor development. Key studies are listed below.

Chlorpyrifos is also linked to acute pesticide poisoning and can cause convulsions, respiratory paralysis and sometimes, death.

Chlorpyrifos is so toxic that the European Food Safety Authority banned sales of the chemical as of January 2020, finding that there is no safe exposure level. Some U.S. states have also banned chlorpyrifos from farming use, including California and Hawaii.

The U.S. Environmental Protection Agency (EPA) reached agreement with Dow Chemical in 2000 to phase out all residential uses of chlorpyrifos because of scientific research showing the chemical is dangerous to the developing brains of babies and young children. It was banned from use around schools in 2012.

In October 2015, the EPA said it planned to revoke all food residue tolerances for chlorpyrifos, meaning it would no longer be legal to use it in agriculture. The agency said “expected residues of chlorpyrifos on food crops exceed the safety standard under the Federal Food, Drug, and Cosmetic Act.” The move came in response to a petition for a ban from the Natural Resources Defense Council and Pesticide Action Network.

In November 2016, the EPA released a revised human health risk assessment for chlorpyrifos confirming it was unsafe to allow the chemical to continue in use in agriculture. Among other things, the EPA said all food and drinking water exposures were unsafe, especially to children 1-2 years old. The EPA said the ban would take place in 2017.

Following the election of Donald Trump as president of the U.S., the proposed chlorpyrifos ban was delayed. In March 2017, in one of his first formal actions as the nation’s top environmental official, EPA Administrator Scott Pruitt rejected the petition by environmental groups and said the ban on chlorpyrifos would not go forward.

In February 2018, EPA reached a settlement requiring Syngenta to pay a $150,000 fine and train farmers in pesticide use after the company failed to warn workers to avoid fields where chlorpyrifos was recently sprayed and several workers who entered the fields were sickened and required medical care. The Obama EPA had initially proposed a fine nearly nine times larger.

In February 2020, after pressure from consumer, medical, scientific groups and in face of growing calls for bans around the world, Corteva AgriScience (formerly DowDuPont) said it would phase out production of chlorpyrifos, but the chemical remains legal for other companies to make and sell.

According to an analysis published in July, U.S. regulators relied on falsified data provided by Dow Chemical to allow unsafe levels of chlorpyrifos into American homes for years. The analysis from University of Washington researchers said the inaccurate findings were the result of a chlorpyrifos dosing study done in the early 1970s for Dow.

In September, the EPA issued its third risk assessment on chlorpyrifos, saying “despite several years of study, peer review and public process, the science addressing neurodevelopmental effects remains unresolved,” and it still could be used in food production.

The decision came after multiple meetings between the EPA and Corteva.

Following the Trump administration’s decision to delay any ban until at least 2022, Pesticide Action Network and Natural Resources Defense Council filed suit against the EPA in April 2017, seeking to force the government to follow through with the Obama administration’s recommendations to ban chlorpyrifos.

In August 2018, a federal appeals court found that the EPA broke the law by continuing to allow use of chlorpyrifos, and ordered EPA to finalize its proposed ban within two months. After more delays, EPA Administrator Andrew Wheeler announced in July 2019 that EPA would not ban the chemical.

Several states have sued the EPA over its failure to ban chlorpyrifos, including California, New York, Massachusetts, Washington, Maryland, Vermont and Oregon. The states argue in court documents that chlorpyrifos should be banned in food production due to the dangers associated with it.