This article explains the effect of monetary inflation on GDP. Nominal GDP is directly inflated by additional money and credit, so GDP growth is simply a reflection of additional money in the economy. It gives no clue as to the underlying economic situation. Whether the monetary planners know it or not, targeting GDP growth with monetary expansion is a tautology. They only succeed in covering up a deeper recession, the cost of which will become apparent subsequently as the currency’s purchasing power declines. And despite the wealth destruction being wrought by currency debasement, in the coming months we will see monetary expansion deployed more aggressively. An inflationary solution cannot succeed; but future GDP numbers will be artificially increased, encouraging policy makers to claim some success. But we should understand the simple relationship between increased quantities of money and the gains they impart to GDP, which will mislead macroeconomic analysts into thinking the economy is more resilient than it actually is.

It is extremely rare to find any commentary on the relationship between monetary expansion and GDP. Yet since last March, when the Fed announced it would unleash unlimited quantities of dollars, it should have become the most important topic for economists and the financial press. Not a peep has been heard.

This extraordinary silence can only be explained by ignorance on the subject, presumably because none of the macroeconomists pouring out of global universities have ever had it set as a subject for research or debate in their dissertations.

The starting point in this voyage of discovery would have to be a taboo subject, Say’s law, which the Great God Keynes dismissed with a wave of his hand in order to invent macroeconomics. Why is it relevant? Because we produce in order to consume. And if we don’t do it, someone else has to produce and pay for us to consume. It is an iron law of the division of labour. In other words, with some limited differences, production is equal to the sum of consumption and deferred consumption (savings).

That is so long as the authorities don’t monkey around with the medium of exchange, the money. A healthy economy is not one that “grows”, but one that does not have its production and consumption interfered with. If the money is sound and its quantity unchanged there would be no change in GDP year after year. As producers, we would continue to anticipate and respond to the demands and desires of the consumer. We are all consumers as well. Those that are disabled from work are subsidised by their families and social groups. Those who become unemployed, always the consequence of misjudgement, have to think again and move on to gainful employment. This is Schumpeter’s creative destruction — a rolling process that is fundamental to satisfying demand where ultimately the consumer is king. It is fundamental to a healthy economy.

While it only happens partially today, it remains the base case when considering all economic topics. In denial of it the state has carved a role for itself, and thanks to Keynes, rewritten the economic rulebook by adding the macro prefix, writing out human activity and replacing it with aggregates and averages. The relationship between money — the temporary storage of our labour to be spent — and economic activity is now undeniably corrupted. 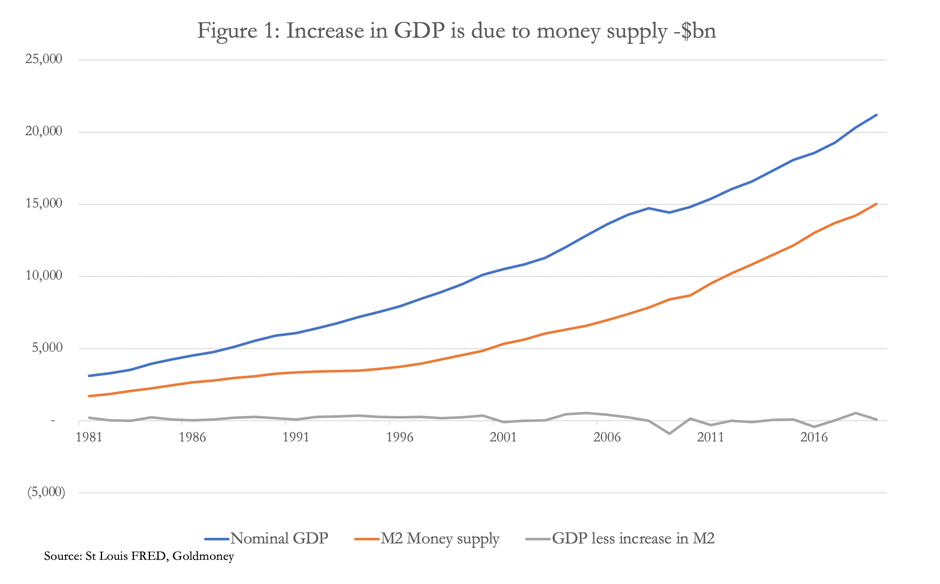 The reason is simple: “growth” in nominal GDP is only growth in the quantity of money, and has nothing to do with economic progress, which is what free markets deliver. The small variations in GDP less the increase in M2 are wholly due to the fact that GDP does not capture all economic activities, only those that are decreed eligible by the statisticians. If all transactions excluded from GDP were accounted for, variations in the difference would amount to a big fat zero.

Logic tells us this is so, but it escapes the neo-Keynesians — they are not strong on logic. And it leads to a simple but devastating conclusion: adjusted for increases in the money quantity, the US economy today measured by GDP is about the same size as it was in 1980, even allowing for changes in population. It is of course, a very different economy today. Despite the growing interference of government intervention and regulation, we have seen enormous progress in technologies, market trends and in our standards of living — all the product of the private sector despite the burden of non-productive, taxing, inflating, regulating and distorting governments.

It proves you cannot measure economic progress, only the amount of money used in transactions. The relevance to today’s events is that since last March, the quantity of money has been suddenly increased by the Fed, raising the issue posed at the beginning of this article. How will the GDP numbers be affected by massive money-printing? We know from Say’s law, that those of us still exchanging our production for the goods and services we need and want, will continue to do so. But given the destabilisation of covid-19 lockdowns, trade tariffs, and the desire of banks to reduce their over-geared balance sheets, the global economy is in a deep slump. The screenshot below, taken from America’s Bureau of Economic Analysis website shows the position in America.

Before getting into the meat of our subject, it is worth noting that the true deflator of GDP should be the broad measure of money supply, not some fabricated CPI-related figure, as discussed above. Putting that issue to one side, we note that GDP collapsed by an annualised rate of over 31% in the second quarter of 2020, while at the same time M2 increased by 9.4%, an annualised rate of 37.6%. Given that we have shown how over the long run changes in nominal GDP are solely reflective of changes in the quantity of broad money, we can confidently state that the fall in last quarter’s GDP is despite the increase in the quantity of money, showing it does not appear to have been spent by producers and consumers. The question arises as to why.

One answer put forward is that the savings rate has jumped, as illustrated in the chart from the St Louis Fed’s FRED service.

Reporter critical of Antifa flees US amid threats as ‘POLITICAL REFUGEE,’ decades after his parents arrived as asylum seekers