Get ready for the biggest collapse in the history of mankind. It will be devastating and reach all parts of society, economic, financial, political & social.

But wait, it won’t happen just yet. Because before that the world will experience a LIFTOFF in markets of gigantic proportions. This will be the grand finale of this financial era. It will involve inflationary liquidity injections of proportions never seen before in history and lead to a massive explosion in many asset markets.

Most investment assets will benefit as the disconnect between markets and reality grows to distortionary proportions.

So there we have it. For investors the outcome of this election is totally irrelevant. In four years time, the difference for the economy and markets between a Trump or Biden victory will be insignificant.

Either one of them only has one choice. They are both facing a bankrupt country which has been running budget deficits since 1930 with four years of exception in the 1940s-50s. The Clinton surpluses were fake. Also, the US has had trade deficits for almost 50 years. The consequence has been an exponentially surging debt which was under $1 trillion when Reagan became President in 1981 and is now $27t. In the next four years, a $40t debt is guaranteed as I forecast four years ago but as the financial system implodes, the debt could easily run into $100s of trillions or $ quadrillions when the derivative bubble bursts.

The global financial system should have collapsed already in 2006-9 but the central banks managed to delay the inevitable demise for over a decade.

What we must understand is that the end of an economic supercycle doesn’t happen quietly. No, the conditions need to be uber-euphoric with maximum bullishness for the economy and stocks. This means that before this era is over, markets must surge in the final months, even double over a 9-18 months period.

Multiple factors are now in place for this to happen. Firstly both presidential candidates will need not just fistfuls of dollars but quantum computers that can print the required trillions and quadrillions of dollars.

The convenient excuse they have is of course Covid. Individuals not working need money, companies need money, municipalities, states and the Federal government need money.

But we mustn’t forget how the end of the final phase of this economic era started. This was back in Aug-Sep 2019 when the Fed and the ECB shouted out from the roof tops that were going to do what it takes to save the system. They didn’t tell us what the problems were, but it was clear to some of us who understood the fragility of the financial system that it was in dire straits. When the last crisis started in 2006, the Fed’s balance sheet was $830b. At the end of the Great Financial Crisis in 2009, the balance sheet had grown to $2t. 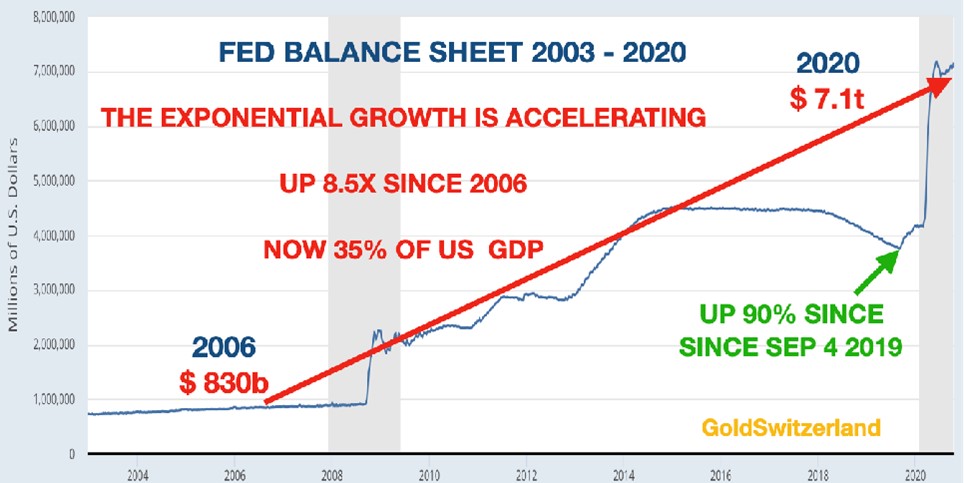 But no one must believe that the problem had been solved by 2009. All it was, was a temporary stay of execution. Why otherwise would the Fed’s balance sheet have grown by another $5t since 2009. Just looking at the predicted budget deficits in the next 4 years, plus accelerating problems in the financial system the Fed’s balance sheet is likely to explode in coming years.

LIQUIDITY INJECTIONS WILL GIVE SHORT TERM BENEFIT TO THE ECONOMY

So the conditions are in place for the biggest liquidity injection in financial history. For many years we have experienced a total disconnect between economic reality and markets. The coming acceleration in money printing and liquidity injections in to the financial system will be so overwhelming that it will not just fuel markets but also give a short term, albeit artificial, boost to the economy.

This is a typical course of events at the beginning of an inflationary phase which leads to hyperinflation as the currency collapses.

The paralysation of the world economy due to Covid will probably peak with the current second wave and therefore add to the optimism in markets. But no one must believe that the pandemic is the cause of the problems in the world economy. No, it has just been a very vicious catalyst which hit an already fragile financial system.

When Covid gradually slows down, the initial optimism combined with the flooding of the system with printed money might last for a year or so. But as the world realises that you cannot solve a debt problem with more debt, the real difficulties in the economy and the financial system will reemerge with a vengeance.

FROM BOOM TO BUST

So let us look at a possible scenario of events following the election:

New president will flood the economy with money & boost stocks

Initial market volatility will settle down quickly and investors will respond optimistically to the new president’s promises of support to every corner of the economy.

Stock markets will surge and could double over a 9-18 month period. No cash will be left on the sidelines. Both institutions and retail investors will throw all the cash they have at the stock market. There will be a frenzy which will surpass the tech stock boom in the 1990s. There will be fanfares and blazing guns as the market seems unstoppable.

But after the likely short-term boom, there will be tears as markets fall by over 90% in real terms. And sadly most investors will ride the stock market all the way down. The big difference this time is that central banks will not and cannot save them.

The biggest beneficiary of this coming boom will be commodity markets which are at a 50 year low versus stocks. Looking at the chart below, the minimum target would be commodities outperforming stocks by 4 to 1. Eventually a new high in commodities against stocks is likely. This would mean commodities outperforming stocks by 20x. The first part of this outperformance will come as stock markets rise. But the final phase will be when general stock markets collapse and commodities continue to strengthen. Goldman Sachs expect commodities to rise 28% in 2021. They expect inflation plus a commodities deficit will drive prices higher. And this is of course what the chart below tells us. 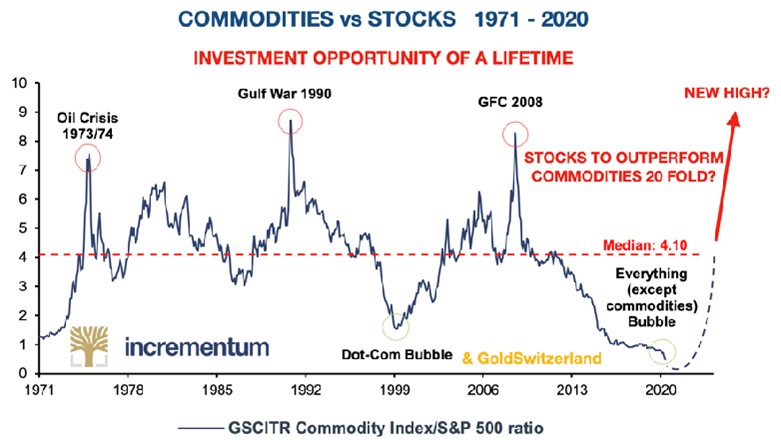 Gold, silver and platinum will vastly outperform stocks. The Dow – Gold ratio will initially reach 1 to 1 where it was in 1980 when gold was $850 and the Dow index 850. Eventually the ratio will reach at least 0.5 to 1 which means that the Dow will lose 97% against gold in the next five years.