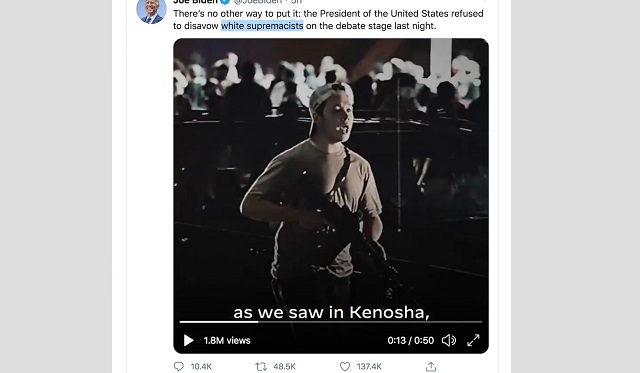 Famed attorney L Lin Wood, who organized Kyle Rittenhouse’s legal defense team, announced Wednesday he intends to sue Joe Biden and his campaign for libel for smearing his client as a “white supremacist” in a shameful new propaganda ad.

Lin Wood, Rittenhouse’s civil attorney, confirmed to Fox News on Wednesday his intention to sue the former vice president and his campaign on his client’s behalf, just hours after Biden posted the 50-second clip to Twitter.

The tweet, which had garnered more than 48,000 retweets and 148,000 likes by 2:35 p.m. EST, boasts the caption: “There’s no other way to put it: the President of the United States refused to disavow white supremacists on the debate stage last night.”

There’s no other way to put it: the President of the United States refused to disavow white supremacists on the debate stage last night. pic.twitter.com/Q3VZTW1vUV

[…] After Biden’s video was released on Wednesday, Wood announced his intention to sue and demanded a retraction.

“He falsely accused a 17-year old boy & prejudiced Kyle’s legal rights,” he wrote in one of a series of tweets.

Wood went on a Tweetstorm slamming Biden and his campaign:

In addition to suing Facebook for being falsely accused of being mass murderer, Kyle Rittenhouse has defamation claim against Joe Biden for falsely accusing him of being white supremacist & militia member responsible for violence in Kenosha.

Biden has forgotten @N1ckSandmann & his lawsuits against CNN & WaPo.

I am going to remind him.@realDonaldTrump is not Biden’s biggest problem. https://t.co/xnJ3o63yyF