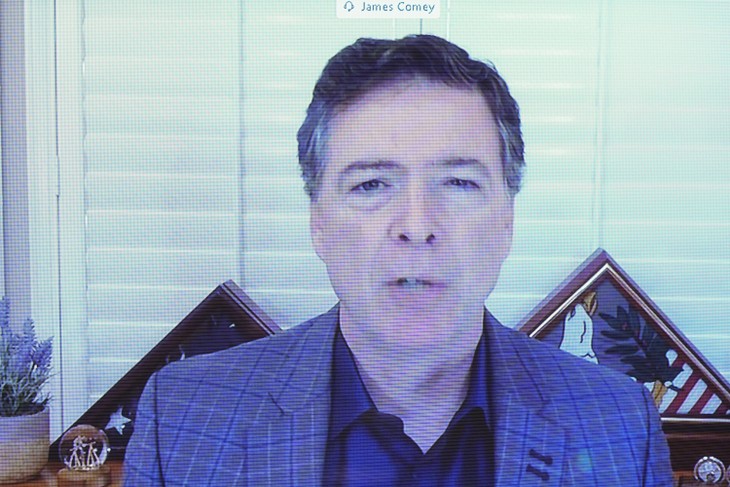 On Wednesday, the Senate held a hearing on Crossfire Hurricane and the corruption in the highest levels of the FBI which led to the Russia collusion investigation into the president based on a fake dossier and a falsified FISA warrant. Through it all, former FBI Director James Comey was a slippery son of a gun who had more memory lapses than Bill Clinton trying to remember what the word “is” is. That is, until Josh Hawley took the microphone and tore him apart like a young Perry Mason with better hair.

Comey kept insisting that it wasn’t just the FISA application (which destroyed Carter Page’s life) that was total garbage but that all the FISA warrants that the FBI applied for were dumpster fires riddled with errors. It was an interesting defense that boiled down to, “I’m not corrupt, but everyone who works for me was incompetent!” But Hawley didn’t let him get away with that. You can skip to the video below to watch the exchange or you can read the transcript I’ve made of my favorite parts here:

HAWLEY: We’ve heard you say a couple times that the OIG found problems in FISA applications across the board but of course it was only this FISA application, these involving Carter Page that you signed off on, that drew an unprecedented rebuke from the FISA court which I’m sure you remember. Let me just quote from that FISA court order: “The frequency and seriousness of these errors in a case that given its sensitive nature had an unusually high level of review at both DOJ and the Federal Bureau of Investigations have called into question the reliability of the information proffered in other FBI applications.” Do you remember that order from the court?

COMEY: It came after I left as I recall but I remember reading about it, yes.

HAWLEY: And have you ever known the court to issue any other such order that you’re familiar with?

HAWLEY: You have known the court to issue orders rebuking the FBI for misleading it in the past?

COMEY: Yes, shortly before 9-11 there was significant criticism by the FISA court of the quality of FISA applications.

HAWLEY: And the court said that the frequency and seriousness of the errors led it to doubt the reliability of the information in all other cases?

BOMBSHELL: Hillary Clinton May Have Cooked Up a Trump-Russia Hoax Back in July 2016

Comey demurred on that one, not really answering the question, so Hawley repeated the rebuke from the court.

HAWLEY: Do you regret your role in this unprecedented misleading of a FISA court?

COMEY: I don’t regret my role, I regret that it happened?

HAWLEY: Why not? Why don’t you regret your role in the unprecedented misleading of a FISA court?

COMEY: I regret that the FBI supplied information to a FISA court that was inaccurate, incomplete, and should have been updated.

HAWLEY: Do you regret that you signed off on it?

COMEY: Well, I regret that it happened. The only reason that I’m hesitating is that what the FBI director does in connection with a FISA is actually very narrow but put that to the side, it’s important that it be accurate and it wasn’t and I regret that.

HAWLEY: You’ve said this several times and I frankly don’t understand it—the certification that the statute requires is a certification by the FBI director as to the contents of the application. You signed off on it. The FISA court said it was so misleading that it now had reason to doubt the FBI’s truthfulness across the board. Are you responsible for these certifications or not?

HAWLEY: Are you responsible for these certifications, or not? Answer my question.

COMEY: I sign certifications on every FISA the FBI sends over to the FISA court, including these.

HAWLEY: Are you responsible for this misleading evidence given to the FISA court? Yes or no?

COMEY: Yes in the sense of command responsibility, no in that I didn’t have personal knowledge that would have led me to understand that we weren’t supplying complete information.

That’s baloney. He did have reason to believe the information was bogus and Hawley proved it.

HAWLEY: Let’s talk about what personal knowledge you have. When you certified the first Carter Page FISA application you believed that Mr. Steele was working for the Democratic Party, didn’t you?

COMEY: I don’t remember if I knew the Democratic Party, I knew that he was working for political opponents of President Trump.

HAWLEY: Now let me remind you of your testimony under oath on December 7th, 2018, at the House Oversight Committee in which you said, and I quote, “Steele was retained by Republicans adverse to Mr. Trump during the primary season and then his work was underwritten after that by Democrats opposed to Mr. Trump during the general election season.” Now, surely you recognized at the time that relying so heavily on a biased source would undermine public confidence in the FBI’s activities, didn’t you?

HAWLEY: Why wouldn’t you? You told the same committee…and I quote, “When you’re the leader of a justice agency,” that’s YOU, “the appearance of bias is as important as the existence of actual bias.” You also said, “A reasonable appearance of bias can corrupt the American people’s faith in your work as much as actual bias can.” Do you stand by those remarks?

COMEY: Very much so.

HAWLEY: But you nevertheless allowed the Democratic Party to leverage the federal government’s most invasive intelligence capabilities against President Trump and you personally signed off on it. You also knew at the time that other officials in the Department of Justice had serious concerns.