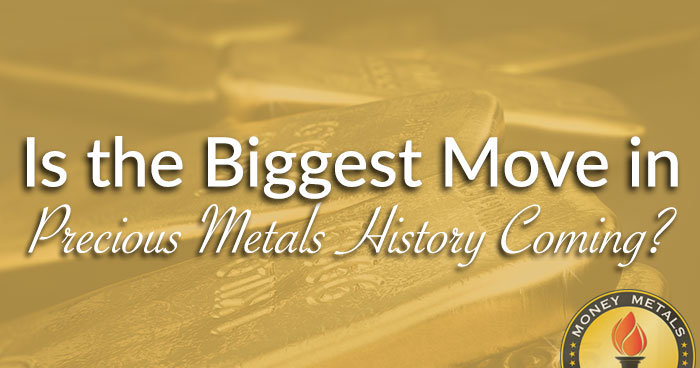 Throughout the entire world, currencies are being printed to worthlessness. And the U.S. dollar is not exempt from that list.

Forthcoming is a loss of trust in all major currencies. While the U.S. dollar will remain the last one standing, the paper price will change relative to the precious metals markets, the stock market, the housing market, and everything else.

However, because of the wilting trust during the final phase of a currency breakdown, the resulting run to gold will be extreme.

What we are experiencing today isn’t like what happened in 1980; that was merely a precursor of times to come. It is clear what lays ahead is a complete disruption – something that only happens every 350 years.

There lies a rare opportunity in the silver market. Those who believe that the precious metals have already made their run will soon be disappointed to discover that they have missed the biggest move in history.

Is Silver a Get-Rich-Quick Proposition?

Yes. If, and only if, you approach the markets in a calculated matter. I discuss these ideas further in my recent lecture presented at the MoneyShow Canada Virtual Expo.

The next recession is coming. Expect further social unrest, supply chain breakdowns, the scarcity of products that we take for granted today, and a shift in the global population’s spending habits. Prepare yourself by recognizing that adjusting is the only way forward.

Too much greed will lead to losses and regrets. The best advice I can offer is to stay flexible, constantly adjust to reality, and do not get your emotions involved.

Remember: human beings have survived anything, even in the harshest conditions, mentally, spiritually, and physically. Don’t underestimate it; we always come through. We will make it through this together.

I spoke with Small Cap Power to discuss the future of silver and gold markets and the potential upcoming recession. You can watch that below.