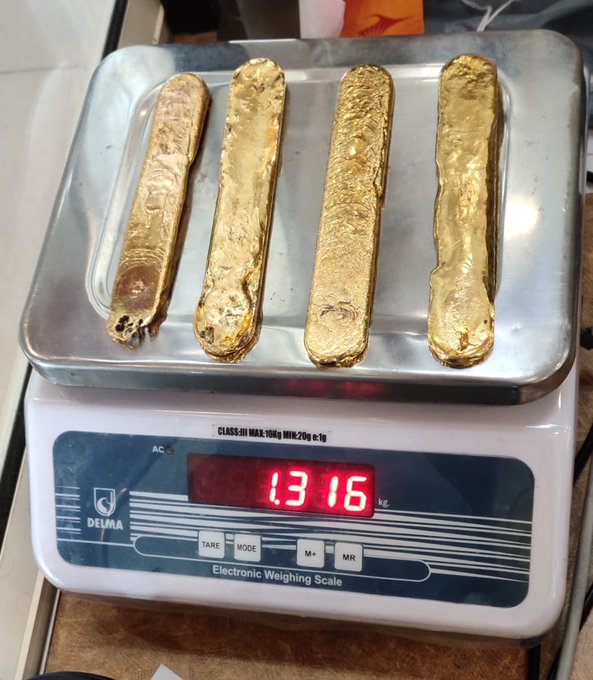 A man flying in from Dubai was caught trying to enter the Indian city of Kerala with nearly 1 kilogram (roughly 2.2 pounds) in gold bullion hidden inside his rectum. The man arrived at Kerala’s Kannur airport on a GoAir flight from Dubai.

According to the National Journal, airport intelligence officers spotted the man waddling through the airport and decided he looked suspicious. After executing a search, they soon found 972 grams of flattened gold coins inside the man’s rectum.

Another passenger on the same flight in from Dubai was caught trying to smuggle roughly 1.5 kilos, though the report didn’t provide any details on his situation.

The following day, the customs office seized 386g of gold from a passenger who landed in the coastal city of Kozhikode on an Air Arabia flight from Sharjah, another city in the UAE.

Local officials said the gold was hidden in the traveler’s underwear in an attempt to avoid declaring it.

Indian police have reported a surge in criminal gangs trying to smuggle gold into the country in recent months, presumably as India’s punishing COVID-19 lockdown ravaged the country’s economy. Customs officials said smugglers returning to India typically mask the gold in chocolate boxes, purses, umbrellas or even in pens in attempts to try and evade taxes.

UAE and Indian officials said they were working to trace the crime syndicate.

Gold prices have surged in 2020 as central banks unleashed a flood of liquidity to try and help mitigate the economic fallout of the lockdowns that rattled the global economy earlier this year.