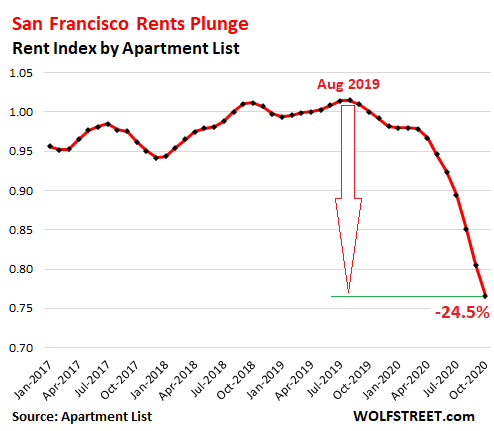 There was even a story on NPR: People from big, densely populated, expensive cities showing up in small towns in beautiful rural areas for a few weeks to get away and then getting stuck, now that they can work remotely, and buying homes and sending their kids to local schools. These are just stories, and there are now millions of them. But it’s showing up in asking rents in those big expensive markets, where vacancies are rising and landlords have to compete with each other to fill their units, and tenants are moving within the city in order to get a nicer place for less money – the free upgrade they’ve been waiting for, after years of costly downgrades.

And I’m in awe of how fast rents are dropping. San Francisco has been the big shocker for months, but now it’s other cities too. And they’ve dragged the national average rent growth into the negative year-over-year.

San Francisco rents, despite steepest plunge, are still the most expensive in the US.

The median asking rent for one-bedroom apartments in San Francisco fell by 1.1% in October from September, to $2,800, after huge plunges in prior months, bringing the plunge since April ($3,500) to $700 or 20%, according to data from Zumper’s Rent Report. From the peak in June 2019 – which had barely edged past the prior high of October 2015 – the median asking rent for 1-BR apartments has plunged by nearly 25% or by nearly $1,000!

Seen from a slightly different angle: Apartment List’s rental index – which uses rent changes from the same rental unit over time, similar to the sales-pairs methodology of the Case-Shiller Home Price Index and reflects all types of apartments – plunged 23.4% year-over-year, and 24.5% from the peak in August 2019:

Concessions are not included in the rent data from Zumper and Apartment List, such as “one month free” or even “three months free,” or “free parking for one year,” or whatever. These concessions have the effect of lowering effective rents but without impacting nominal asking rents. This is good for landlords who have to show to their increasingly edgy bankers that, despite appearances and reports like this, the bottom isn’t falling out from their apartments, so to speak.

Seen from a slightly different angle: Apartment List’s rental index for New York City, which goes back only to 2017, peaked in December 2019 and has since plunged 17.2% with the sharpest drops in the past five months (the chart is on the same scale as the San Francisco chart): 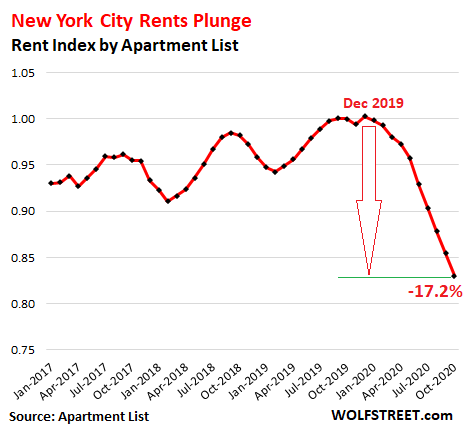 The 17 most expensive rental markets.

The table below shows the 17 most expensive major rental markets by median asking rents, based on Zumper’s data, plus the year-over-year percentage change, and in the shaded area, peak rent and change from peak. Chicago and Honolulu started their rental downturn in 2015. In 12 of the 17 cities on the list, 1-BR asking rents have dropped by the double digits from peak. Chicago and Honolulu show the biggest drops, followed by San Francisco and New York City: 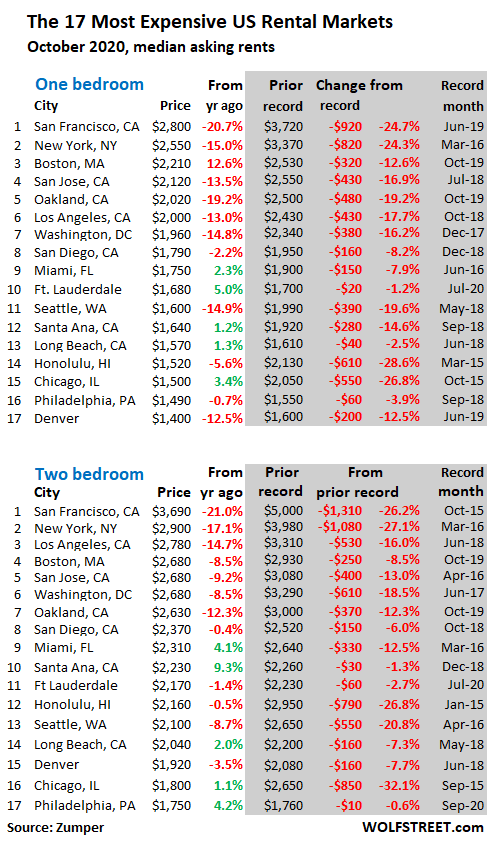 “Median” means half of the asking rents are higher, and half are lower. “Asking rent” is the advertised rent. It does not measure what tenants are currently paying in rent and does not include concessions.

Zumper collects this data from the Multiple Listings Service (MLS) and other listings, including its own listings, in the 100 largest markets, but only for apartment buildings, including new construction. It doesn’t include single-family houses and condos-for-rent.

Rents in other Big & Expensive cities drop to multi-year lows:

Below are charts based on data from Apartment List, which differs somewhat from the Zumper data, in part due to its methodology, which, instead of using median asking rents across the market, is using asking rents of the same apartment units as they change over time, which avoids some of the issues associated with median asking rents. Apartment List converts rental data into an index centered around the value of 1, with data going back to 2017. All charts below are on the same scale. They show change in rents but not dollar-rents. 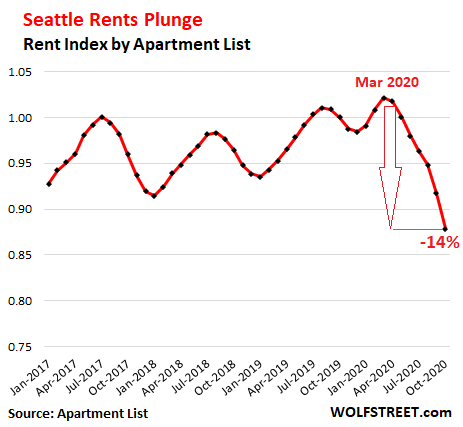 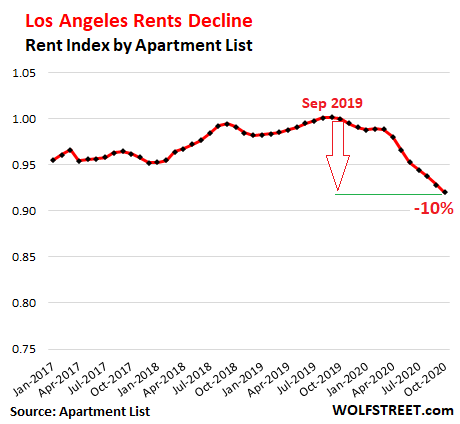 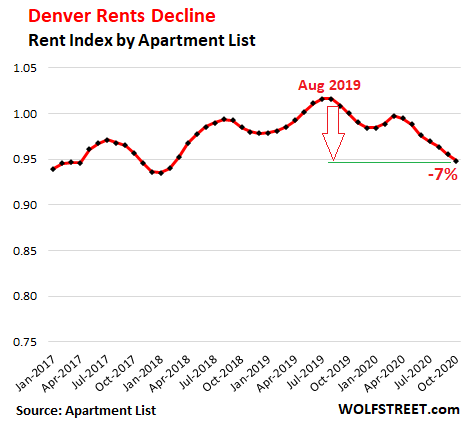 Boston rents plunged 17.3% from August 2019, including a 5% drop in October from September: 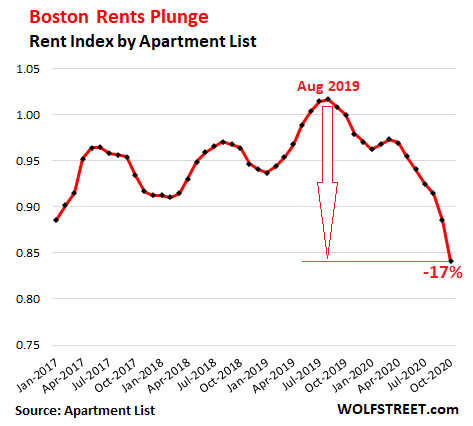 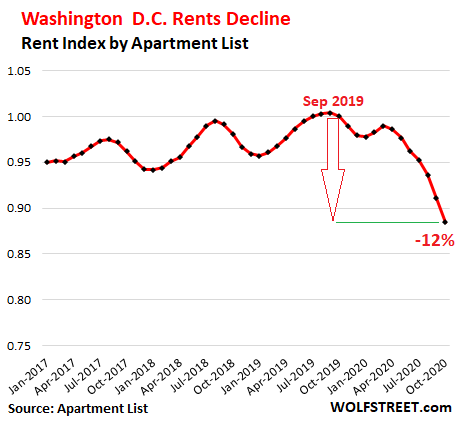 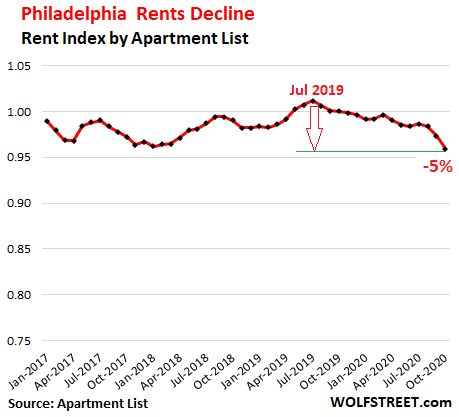 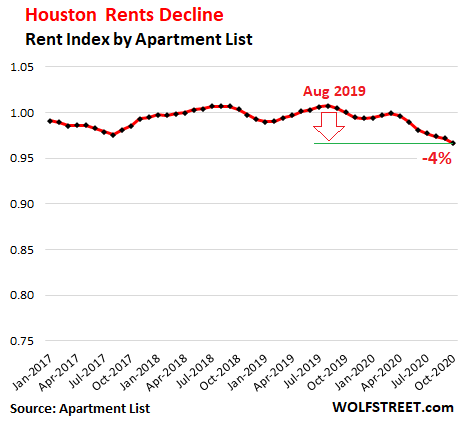 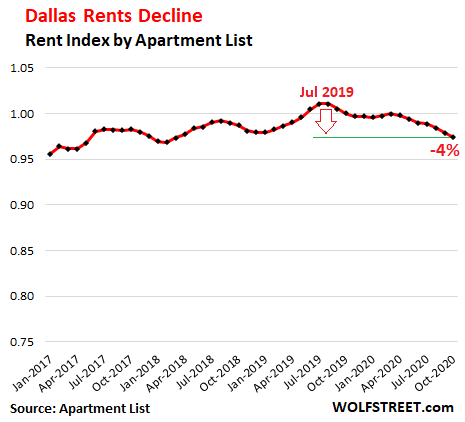 But Apartment List’s data only goes back to January 2017. Rent peak in Chicago occurred in 2015, according to Zumper data, and rents started plunging in late 2015 and throughout 2016 before stabilizing in 2017. These moves in late 2015 and in 2016 are not reflected here. 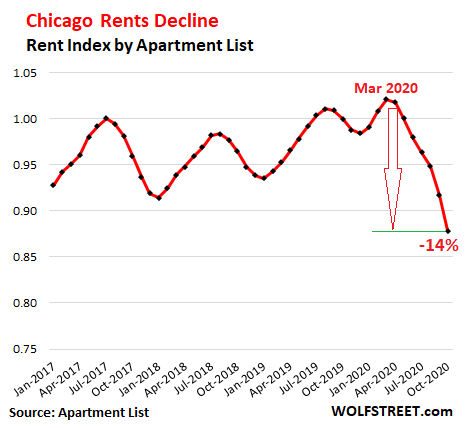 But rents in St. Louis, MO, have not declined over the past year: 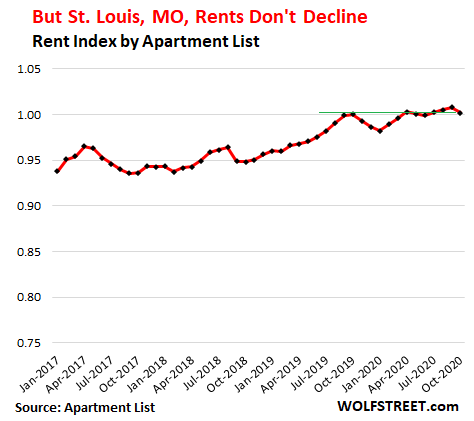 The National average rent dipped 2% since the peak in August 2019.

Rents in many smaller markets have increased year-over-year, and in some of them by the double digits. But declining rents in major markets are now outweighing the rising rents in smaller and less expensive market, and the national average rent in October, according to Apartment List data, declined 1.4% year-over-year and 2.0% from the peak in August 2019: