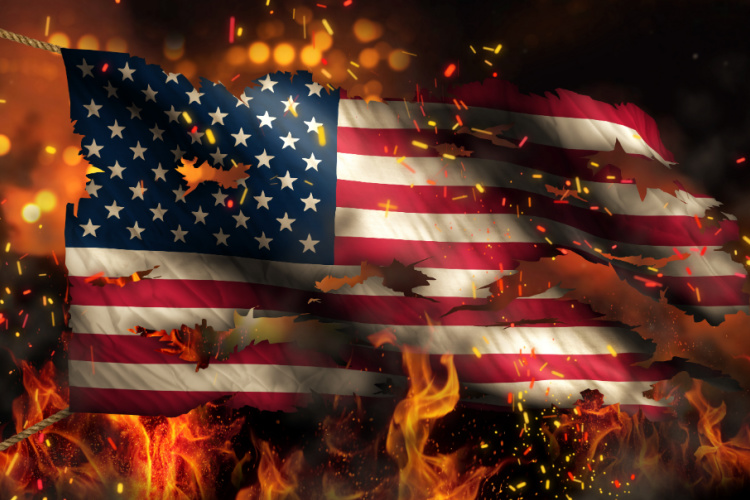 It feels like only a short time ago when I wrote a similar article about post-election chaos in the battle between Donald Trump and Hillary Clinton. And all hell did break loose in cities across the country. While the worst of it was short-lived, it set the scene for four years of contempt, disrespect, and growing disenfranchisement with the opinions of our fellow Americans.

And here we are with another hotly contested election between two candidates that are both deeply scorned by the opposition. We’re damned if we do and damned if we don’t with regard to this election. Regardless of who wins, chaos is likely to erupt. And with both candidates suggesting they might be unwilling to concede to the other, expect the flames to be fanned by this.

This article is not about Republicans or Democrats or the election process itself. (Although there are articles popping up all over the place that say Russia or Iran or somebody has acquired voter info and is trying to interfere in the election.) It’s not about whether our election integrity is still in place.

It’s about the aftermath and how it will affect all of us.

You need to get prepped. Immediately.

What it all boils down to is that we need to be prepared.

We need to be ready for any unrest that comes about as a direct result of the election – and I really believe that there will be some form of uprising against the result. I hope it will be nothing more than a few minor, isolated incidents, but I can’t get past the niggling feeling that all hell is just about to break loose.

November 2nd could be the last day of relative normalcy for quite some time. Go here and sign up for our newsletter to grab your FREE PDF Post-Election Checklist.

Your goals are as follows:

If possible, hunker down in a safe location.

Generally speaking, urban areas will be the most dangerous. If you live downtown, election week might be better spent visiting friends or family outside of the city. However, I know that life continues and you may not be able to just pick up and leave. If you can’t do that, you need to prepare your home for the potential of riots. (See this article.)

Of course, no place is completely safe. Just ask the lady flying a Trump flag who received a letter saying her rural home was a target for arson.

Dear neighbor, you have been identified by our group as being a Trump supporter. Your address has been added to our database as a target when we attack should Trump not concede the election. We recommend that you check your home insurance policy and make that it is current and that it has adequate coverage for fire damage. You have been given ‘Fair Warning.’ (source)

I’m not trying to scare you, but if these folks in small-town New Hampshire are targets, anyone could be. Don’t let your location lull you into a false sense of security. When people are angry and radicalized, any place where someone disagrees with them can become a target. Don’t be afraid – be prepared.

Have what you need so you don’t have to leave home.

Once you get hunkered down, be prepared to stay put for a while.  You don’t want to have to shove your way through an angry mob to get a gallon of milk or a necessary prescription. You will be far better off if you are able to get the supplies you need to stay home for at least a week without leaving.

Try to shop for two weeks at a time on your next few grocery trips so you can be sure to have what you need on hand. Do NOT forget essentials like prescription medications.

You need to stay apprised of what is going on in your area. In this digital era, it’s easier than ever before to know what’s going on near you. Some of the following can provide communications options.

Remember that your information is only as good as your source. If there’s a person in your local group that responds with hysteria to every event, he or she might not be the best arbiter of truth. As well, the media has been notoriously biased in its coverage, calling violent riots “peaceful protests.” Take the time to confirm the information with more than one source when you can.

The thing that Selco and Toby said to us the most when we were in Croatia discussing different scenarios was, “Don’t be there.” And if it was a situation where you found yourself there, the advice was, “Don’t be there as soon as  possible.” Or in other words, get the heck out of there.

Don’t go to a “peaceful protest” in solidarity if you aren’t also prepared to be swept up into a riot. Mobs form quickly and do not think rationally. (More on mob mentality here) Stay as far away from large, angry groups of people as possible. You may feel a strong urge to counterprotest – you should squelch that urge if safety is key for you. I’ve written before about how survival is just about surviving and no place is that more true than in situations like this. Many readers call this cowardly and if they want to go down fighting, that’s certainly their prerogative. I plan to live to fight smarter when the odds are in my favor.

Don’t go out of curiosity to “see what’s going on.” Avoid volatile situations and people. Don’t try to confront a mob by yourself – your property is not worth the lives of you and your family. To learn more about surviving civil unrest and riots, go here and learn from Selco.