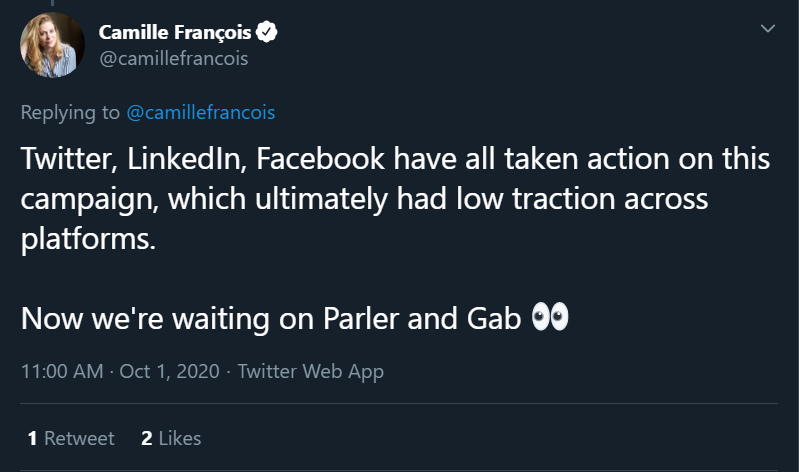 It’s no secret. For a long time, Gab has been the subject of smear campaign after smear campaign, with dishonest “journalists” and “academics” cherrypicking a post here and there, in the attempt to demonize the whole site – with the ultimate goal being to stigmatize the site, in order scare the average person away from it, haplessly corralled on sites like Facebook and Twitter, where everything about you gets indexed, tracked, monitored, and if you become too effective – banned. These kinds of stories have been used in the past to try and justify deplatforming Gab, leading to it being dropped by a number of service providers and payment processors – and action which should be illegal, by the way, and which Trump could end in a heartbeat by instructing the DoJ to revise their Operation Chokepoint parameters, since it is now being used by international megacorps to deplatform anyone they don’t like, in an anti-competitive way, and prevent them from conducting normal, legal commerce.

But you’ve heard all the smears before; Gab is racist/sexist/bigoted/xenophobic/white supremacist/nazi/etc. It’s a hodgepodge of all the -isms guaranteed to boil the blood of anyone suitably soy-infused. But the reality is this, and this alone: Gab is a FREE SPEECH site, and on a truly Free Speech site, you will probably, at some point, encounter speech you do not like, which you do not agree with, and which will make you mad. The hypersensitive mind of the Pedocrat-Leftist (because let’s face it: if they’re supporting Biden, they may not be touching children themselves, but they’re A-okay with electing someone who does), rather than simply reaching for the block or mute button in such a scenario, immediately turns to censorship as a means of first resort, since they can not tolerate having their ideas challenged, and rely on entire ideological and institutional constructs to under-gird their worldview.

And this is exactly why Free Speech must be preserved – absolutely – because if we don’t, Pedocrat Apparatchiks who raise money for Antifa in their spare time will otherwise get into positions of power and influence and, at the behest of their monied masters, dutifully rush to move the goalposts as to what qualifies as “double-plus good” and what lands in the strictly verboten category of “hate speech” which must never be allowed – ever, ever, ever – on any platform, lest there be…

It’s why you can’t say “retarded” on Twitter any more, no matter how idiotic someone is being. (Retards are, evidently, a “protected class” now).

It’s why you can’t say Latino any more, and have to mumble over the etymological abortion that is “LatinX.”

It’s why you can’t say that the creeps salivating over Cuties on Netflix are literal, actual pedophiles, but now have to address them as “MAPs” or “Minor Attracted Persons.”

Goalposts get moved every single day by people who not only want to control you, but operate with total impunity, because the simple fact is if they played by the rules of today, they would lose. So they need to change the “rules” – moment by moment, in order to succeed and avoid any kind of accountability, or societal obligation that aligns with the Good, the Beautiful, and the True.

It’s the societal version of Calvinball, except Calvin here has been getting injected with hormones from age six, has mermaid green hair, calls xirself “Zephyr” and needs to dilate 5 times a day.

Got all that, you hateful, privileged bunch of Kulaks?

Good, because today Gab was attacked – alongside Parler – much in the same way it has been before, this time by a group calling itself Graphika, which is alleging that a Russian Influence Network is operating on both sites, and that this is new and unprecedented, and the final harbinger of Ragnarok.

This, of course, comes hot on the heels of a media push to malign Parler, following the recent Presidential debate, wherein Trump was asked to condemn white supremacy – to which he responded “sure” several times – and the Proud Boys – to which he said to “stand down, and stand by.”

The media wholesale ignored the obvious condemnation of white supremacy – despite him repeatedly condemning it over the years and several times at the debate itself – and ran with the narrative that the Proud Boys were a white supremacist organization (they’re not) who were instigating violence in the streets (also patently false and evident to anyone with, you know, eyeballs in their head).

And with this narrative in hand, the media crafted a series of articles all in tandem, all within hours of each other, highlighting how the Proud Boys were jubilant over Trump telling them to “stand down and stand by.” This was, of course, painted as the mother of all white-supremacist dogwhistles – because there is basically no one left in the entire corporate news apparatus capable of telling the truth, it seems.

Several Blablets, including yours truly, noted at the time that this was little more than an obvious attempt by the media to set the stage for Parler to be deplatformed by its various service providers – service providers which all deplatformed Gab in the past. I’ve been saying for months now that Parler was extremely vulnerable to this kind of attack – and it’s as true today as it was when I first said so. The narrative would be that “violent white supremacists” were “coordinating” on the platform, and someone in Amazon’s AWS HR department would go to Parler and say, “Delete these accounts, or we’re going to deplatform you.”

It’s the same tactic which was used against Gab so long ago. It’s sad to say that, in the modern world, Free Speech exists in-as-much as you own and operate your own hardware. That’s just the reality, and that’s why it’s such a relief that Gab recently spun up its own metal.

But you can never launch a proper disinformation campaign from one angle, no!

And this is where Graphika comes in. You may have heard of them in the past. They bill themselves as a kind of research group which focuses on social media tracking. They aggregate data, pore over “influence networks” and generally REEEEEEEE about >muh Russian Influence and >muh Conspiracy theories – which is exactly what they did today in their most recent report on an alleged Russian Influence Network operating on both Gab and Parler.

Russian operators ran a far-right website and social media accounts that targeted American users with pro-Trump and anti-Biden messaging, according to information from Reuters and Graphika’s investigation. This included the first known Russian activity on the platforms Gab and Parler. The operation appeared connected to a recent Russian website that targeted progressives in America with anti-Biden messaging.

The far-right “Newsroom for American and European Based Citizens,” naebc[.]com, pushed the opposite end of the political spectrum from the ostensibly progressive PeaceData site, but the two assets showed such a strong family resemblance that they appear to be two halves of the same operation. Both ran fake editorial personas whose profile pictures were generated by artificial intelligence; both claimed to be young news outlets based in Europe; both made language errors consistent with Russian speakers; both tried to hire freelance writers to provide their content; and, oddly enough, both had names that translate to obscenities in Russian.

Reuters first tipped Graphika off to the existence of the NAEBC website and its likely relationship to PeaceData. U.S. law enforcement originally alerted the social media platforms to the existence of PeaceData. On September 1, Facebook attributed PeaceData to  individuals associated with past activity by the Russian Internet Research Agency (IRA).” Twitter attributed it to Russian state actors. Social media platforms (Facebook, Twitter, LinkedIn) have taken similar action to stop activity related to NAEBC on their platforms. To date, Parler and Gab have not taken action on their platforms.

You can read the whole report here if you want but the main gist is that there were SIX accounts on Gab and SEVEN accounts on Parler which amassed some 3,000 and 14,000 follows respectively, and that they were largely posting pro-Trump, anti-Biden stories, and that all these accounts were working together to spread these stories.

You read that right.

Six accounts on Gab, and Seven accounts on Parler warranted a 34 page analysis by this group, which then went on to put the onus on Gab and Parler to “take action.”

For the high crime and misdemeanor of… sharing blog posts.

Notably absent from their report was any analysis of whether the information being shared by these profiles was accurate or not. (No, they feel much more comfortable going after the “who” than after the “what).” But even if not, and these accounts were spreading blatant, bald-faced lies, does that warrant instituting corporate censorship? Obviously not, for people all over the world share incorrect information every moment of every day – even with malicious intent.

Why, Pedocrats do it every day of their lives!