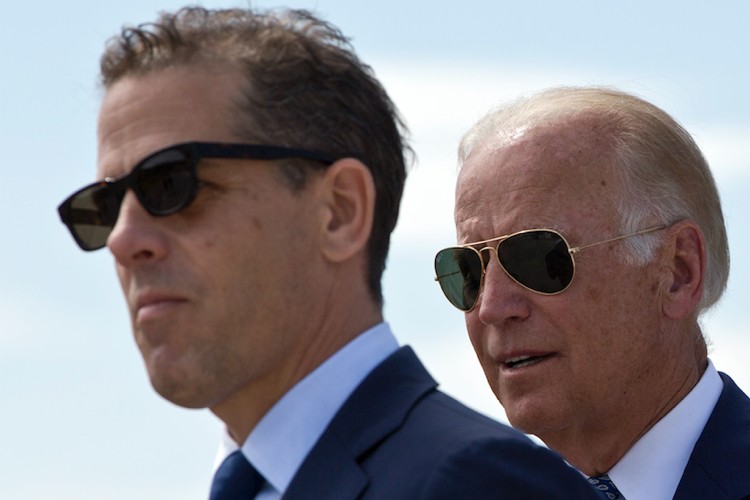 It’s a striking scenario: Then-vice president Joe Biden was essentially taking perhaps millions in bribes in exchange for providing access to himself, using his son Hunter as the bag man. When the FBI was given a laptop computer with emails detailing this corruption, it hid the evidence instead of seeking justice. And when a major newspaper finally broke the scandal, major Democrat donors — the Big Tech giants — suppressed the story so fewer Americans would see it. Aided by this big-donor interference, now-presidential-candidate Biden then claimed the story was “discredited,” giving a compliant mainstream media a justification for not covering it.

Those are the allegations and realities, anyway, and are why Rudy Giuliani, who has seen the Hunter-gate emails and is one of America’s top prosecutors, said, “I’ve been in this business a long time. This is the biggest cover-up I have ever seen. And it is the biggest government scandal I’ve ever heard of.”

Perhaps you’ve already heard of the story, broken by the New York Post: John Paul Mac Isaac, owner of The Mac Shop in Wilmington, Delaware, received for repair last April a MacBook Pro computer. After the allotted 90-day period for picking up the device and paying for the work had elapsed, Isaac legally took possession of the computer and examined its contents.

He was shocked at what he found.

Isaac contacted the FBI via a third party, he relates, which then sent someone to make a forensic copy of the device’s hard drive; the bureau later confiscated it with a subpoena. Isaac, however, had also made a copy for himself, he says.

Isaac claims that his examination of the computer made him certain it belonged to Hunter Biden, and the contents were disturbing. “I know that I saw, I saw stuff,” the Western Journal relates him as stating. “And I was concerned. I was concerned that somebody might want to come looking for this stuff eventually and I wanted it out of my shop.”

And others, apparently, wanted it out of the public eye. After the FBI sat on the evidence for a year and contacting congressmen also proved fruitless, Isaac sent a copy of the computer’s hard drive to Giuliani. This brings us to the present.

While Joe Biden has dismissed the story as “discredited,” interestingly, no one has disputed the emails’ authenticity. Moreover, we’ve long known about Hunter’s lucrative dealings with Ukrainian energy company Burisma.

As for the latest emails, they “reveal a man obsessed with getting his payment cut for ‘introductions’ to people like his dad, not just with the Ukrainians, but the Chinese, to the tune of tens of thousands, if not millions of dollars,” reports commentator Monica Showalter.

Wondering if Biden is “a presidential candidate or the godfather of a mafia-style crime family,” Showalter then quotes Power Line’s John Hinderake, who noted that “today [10/15] the [N.Y.] Post featured a story even more explosive than the one Twitter and Facebook tried to suppress yesterday”:

Hunter Biden pursued lucrative deals involving China’s largest private energy company — including one that he said would be “interesting for me and my family,” emails obtained by The Post show.

One email sent to Biden on May 13, 2017, with the subject line “Expectations,” included details of “remuneration packages” for six people involved in an unspecified business venture.

Hinderake also noted: “The emails indicate that Hunter was to receive an annual salary of $850,000. Somewhere on the planet there is a greedier person than Hunter Biden, but you would have to look hard to find him. But of course, no one cared then, or now, about Hunter.” And he quoted from the New York Post:

In addition, the email outlined a “provisional agreement” under which 80 percent of the “equity,” or shares in the new company, would be split equally among four people whose initials correspond to the sender and three recipients, with “H” apparently referring to Biden.

Evidence for this resides in the emails. One of them, for example, written by Hunter to estranged daughter Naomi, reads, “I love you all but I don’t receive any respect and that’s fine I guess. Works for you apparently. I hope you all can do what I did, and pay for everything for this entire family for 30 years. It’s really hard but don’t worry, unlike Pop, I won’t make you give me half your salary.”

“Pop” would be Joe Biden.

Yet it gets worse. “China has all of the photos that we have — which means [Hunter] is, really, a massive national security threat to the United States,” Giuliani also said, American Thinker relates. “Since his father lies — about all of this — its [sic] an easy area of extortion.”

In other words, leftists have been projecting again — it’s Biden who allegedly presents the kind of threat they’ve long accused Trump of posing.

Of course, it should be emphasized that we can’t yet know for certain that these emails are authentic, though, again, Biden hasn’t claimed they aren’t. But just as big a scandal is the reaction to the revelations.

Moreover, the mainstream media are suppressing the story, and Biden wasn’t even asked about it at Wednesday’s major town-hall event, which took the second presidential debate’s place.

Then there’s the FBI. If the allegations are true — and the bureau hasn’t denied them — it was doing the Deep State’s bidding and hurting our country by hiding evidence of high-level corruption. It’s the Third Worlding of America.

Note also that while the emails provide more detail, this isn’t a new story. We’ve long known that Hunter was paid $50,000 a month to be on Burisma’s board despite having no experience in the energy business. Furthermore, Joe Biden, stupidly, bragged publicly (video below) about getting the Ukrainian prosecutor who was investigating Burisma fired using $1 billion in US aid as leverage.

And we should ask: Why was Biden so interested in ousting this prosecutor, Viktor Shokin?

We should also ask: Didn’t Barack Obama know what his vice president was up to? And if not, what does this say about his competence?

For more on this scandal, watch the powerful Tucker Carlson Tonight segment below, from his Wednesday program.